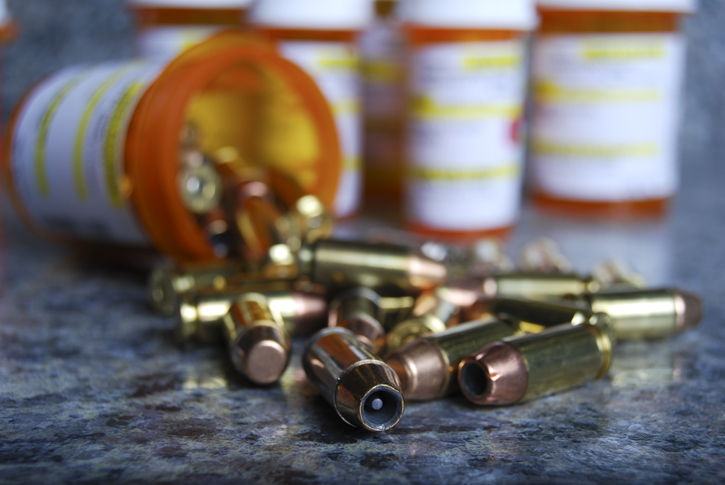 “Psychiatric Drugs Create Violence & Suicide is a compelling resource detailing more than 30 studies and over sixty cases of mass shootings and acts of violence committed by those taking or withdrawing from prescribed psychotropic drugs.” – Jan Eastgate, President CCHR International

Although there are numerous reasons for acts of mass violence, funding poured into violence prevention mental health programs has ignored a potential pivotal source, especially in schools: the treatment.

Mental health professionals suggest that the latest spate of mass killings require more psychiatric services and stronger involuntary commitment laws to prevent future violence. However, this would most likely increase acts of violence because psychiatric drugs are usually the first line of treatment and carry a risk of inducing suicide and hostility in a percent of those taking them. Taxpayer appropriations have been funneled into everything related to prevention except investigating psychotropic drug links to acts of violence. A financial audit of violence prevention mental health programs should be conducted to show accountability for results.

killed 13 and injured 24, national violence prevention programs in schools have been implemented, with billions of dollars invested in this.

Funding has been a bottomless pit without a commensurate decline in mass violence. The Safe Schools Act of 1994 had a goal that by the year 2000, every school in America would be free of violence.[2] The Every Student Succeeds Act (ESSA) passed in 2015 allocated more federal funds for school-based violence prevention programs.[3]

Yet school shootings increased by 37% between the 1990s and 2013 and continued unabated.[4] This figure doesn’t factor in acts of school violence that do not involve guns.

Since 2000, there have been at least 27 acts of mass violence in schools committed by those taking or withdrawing from psychiatric drugs or having undergone unnamed mental health treatment, resulting in 33 deaths and 83 wounded. At least seven of the killings involved stabbings.[5] Something drove them to kill.

Some 76 million Americans take psychotropic drugs, of which over 2.1 million are children and adolescents taking antidepressants despite a Food and Drug Administration suicide black box warning for teens and young adults. Between 1999 and 2014, there was a 64% increase in the percentage of people of all ages using antidepressants.[6]

Increased mental and/or physical agitation has caused about 5% of subjects taking antidepressants to drop out of clinical trials. When that percentage is applied to the 41 million individuals in the U.S. taking antidepressants, it begs the question how many of that 2.05 million could potentially become so agitated that they would kill?[7]

The antidepressant market is a highly lucrative one that would be protected at any cost. The global market was estimated at $5.2 billion in 2019 and over $80 billion is spent in a year worldwide in psychiatric drug sales. The Central Nervous System drugs (including ADHD drugs) market is expected to reach $131 billion by 2025.[8]

Psychiatrists, often backed by Big Pharma, misdirect policymakers by saying there is no “scientific” evidence of psychiatric drugs causing violence, even though violent behavior, including homicide are reported side effects.

“Most people who commit these kinds of acts of severe violence are only prescribed medication because of their horrible thoughts, moods, and ideas,” Dr. Gwen Adshead, a forensic psychotherapist stated.[9]

But that’s the point: having been prescribed the drugs, they acted on those thoughts and killed.

What role such drugs may have had on San Antonio, Texas teen Rodolfo Aceves (19) who was arrested on June 27th, 2022, for planning a mass shooting at an Amazon Delivery Station where he worked in unknown. He has a history of mental health treatment and was institutionalized at age 16.[11]

Robert Crimo III, 21, the July 4th Illinois parade shooter was reported to have experienced personality changes a few years ago when he and his girlfriend broke up. He started taking psychedelic drugs, seemingly illicitly.[12] While not confirmed which hallucinogens he took, as an example, psilocybin adverse effects include: Impaired judgment and feelings of detachment, psychosis, anxiety and panic attacks.[13] In April 2019, police went to the family home after receiving a report Crimo had tried to take his own life a week earlier. They were told mental health professionals were handling the matter!

Psychiatrists are currently trying to have psychedelics re-introduced as mainstream mental health treatment after being banned in the 1970s.

The U.S. Center for Disease Control (CDC) has been collecting data on school-associated violent deaths since 1992, defined as a fatal injury (e.g., homicide, suicide, or legal intervention). Only violent deaths associated with U.S. elementary and secondary schools, both public and private, are included.[14] CDC uses the Youth Risk Behavior Surveillance System that monitors “health-risk behaviors of students.” The high school survey, for example, is 21 pages of questions, none of which identify if the student is taking prescription psychotropic medications or abusing them—missing the mark entirely on a potential source of violent and suicidal behavior.[15]

Blaming the “Illness,” Not the Drug

Many psychiatrists deflect legislators’ attention away from iatrogenic drug-induced violence by arguing that no studies have been done on the association between the risk of committing homicide and the use of psychotropic drugs.[16] That’s also the point. It’s a safe bet that they won’t because, how could a legitimate study be ethically approved to deliberately induce violent behavior using a prescription drug?

Until now, this seems only to have been done clandestinely in the 1970s under the CIA’s MK-Ultra program when psychiatrists carried out experiments to search for a mind control drug that could be weaponized against enemies.[17] CCHR has copies of CIA documents obtained under the Freedom of Information Act showing psychotropic drugs were tested to see if a subject could be chemically induced to assassinate.[18]

While not excusing the crime, today, courts recognize the “overwhelming probable” relationship between antidepressant and murder, “treatment-induced psychosis” and, in one case a jury determined that the antidepressant paroxetine “can cause some people to become homicidal and/or suicidal” and that the drug was 80% responsible for a normally calm and caring father to kill his family.[19] 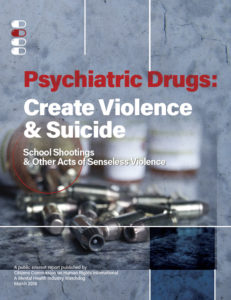 Another key point ignored is the debilitating withdrawal effects some people taking prescription psychotropic drugs can experience which are documented to include violent and suicidal behavior. Many of the studies on withdrawal effects are published in CCHR’s report Psychiatric Drugs Create Violence & Suicide.

Psychiatrists obfuscate withdrawal effects by blaming the person’s “untreated” mental illness. By involuntarily committing prospective aggressive individuals and keeping people incarcerated for longer periods (usually on psychotropics) they argue the person can get the treatment he or she needs.

But close inspection shows that not to be true. Consider the history of Brandon Scott Hole, 19, who shot and killed eight people and injured seven others at a FedEx building, before committing suicide in April of 2021 in Indianapolis, Indiana.[20] From age 10, he’d received psychiatric treatment. In September 2011, his agitated behavior spurred his mother to take him to a center where he was given anxiety medication. A year later, after starting 5th grade, he was still aggressive and prescribed more of the same medication, with records showing only “mild benefit.” Yet another drug was added, and he also underwent behavioral therapy. In 2013, he spent a period in juvenile detention and put on probation for several months, then released. By 2020, he was suicidal. Medical records indicated that he suffered from six different disorders. The teen originated: “I can get very, very angry. I have very little control over myself when that happens” to which records say he will benefit from medication for psychiatric symptoms. On March 31, 2022, he meets a social worker for therapy. On April 15, he murdered eight innocent people described as an act of “suicidal murder.”[21] Hole had suicidal thoughts “almost daily” in the months prior to the attack and attempted suicide on “more than one occasion,” according to an FBI special agent.[22]  Clearly, the six different mental disorders he’d been given during his short life were not effectively treated and the medication may have exacerbated his thoughts.

The American Psychiatric Association (APA) stresses, “It is important to note that the overwhelming majority of people with mental illness are not violent.”[23] But as one online writer puts it: Psychiatrists argue that “mental illness does not cause violence…. Why, then, do we think that expanding access to mental health services will reduce mass violence?”[24]

A man who allegedly attacked the Cuban Embassy, firing at it 32 times in April 2020, had been evaluated at a psychiatric hospital and prescribed an antipsychotic in March. Although he may not have been compliant in taking it daily, antipsychotic withdrawal effects include hostility. The drug remains in the system, potentially impacting upon mental faculties and emotional behavior.[25]

On July 3rd in Denmark, a suspected gunman, Noah Essenes, 22, said his antipsychotic drugs weren’t working before a shooting spree in a Danish shopping center that left 3 dead and 27 injured.  He was remanded into psychiatric “care”—which clearly had previously failed him—and charged with murder and attempted murder.[26]

John Read, Ph.D.’s article “The experiences of 585 people when they tried to withdraw from antipsychotic drugs,” published in the June 2022 edition of Addictive Behaviors Reports reported that in an online survey of 585 antipsychotic users from 29 countries, who had tried to stop taking the drugs, 72% reported classical withdrawal effects, including anxiety and agitation; 52% of these categorized those effects as “severe,” 18% reported psychosis as a withdrawal effect and 23% took at least one year to successfully withdraw completely.[27]

When an antipsychotic, and thereby the dopamine neurotransmitter blockade, are removed, or reduced, “the brain is overwhelmed with dopamine…. This can result in a withdrawal psychosis,” Read said.[28]

Antidepressants also have serious withdrawal effects that can last years.

It seems that in the U.S. with the spate of mass killings involving teens, and with massive funding of violence-prevention programs in schools is not decreasing.

Funding continues to be invested in programs without ever looking at the potential psychotropic drug link to violence.

As for increasing involuntary commitment laws to lock up and maintain individuals on psychiatric drugs, an estimated 54% of admissions to psychiatric facilities in the U.S. are involuntary.[38]

For good reason. No one should suddenly stop taking a psychotropic drug without medical approval and supervision.

Acts of Violence During Withdrawal

A small example of cases of killers going through withdrawal includes:

Recommendation: A financial audit on all government funding of violence-prevention mental health/behavioral programs should be conducted with outcome evaluation to show accountability for results.

Psychiatric Drugs Create Violence & Suicide is a compelling resource detailing more than 30 studies and over sixty cases of mass shootings and acts of violence committed by those taking or withdrawing from prescribed psychotropic drugs. It addresses examples of acts of violence up and including 2017, and as of July 2022, is in the process of being updated.

[2] “School Safety Policies and Programs Administered by the U.S. Federal Government: 1990–2016,” A Report Prepared by the Federal Research Division, Library of Congress under an Interagency Agreement with the National Institute of Justice, U.S. Department of Justice

[39] Annual report of the United Nations High Commissioner for Human Rights and reports of the Office of the High Commissioner and the Secretary-General, 49th session, Human Rights Council, “Summary of the outcome of the consultation on ways to harmonize laws, policies and practices relating to mental health with the norms of the Convention on the Rights of Persons with Disabilities and on how to implement them,” 28 Feb.–1 Apr. 2022