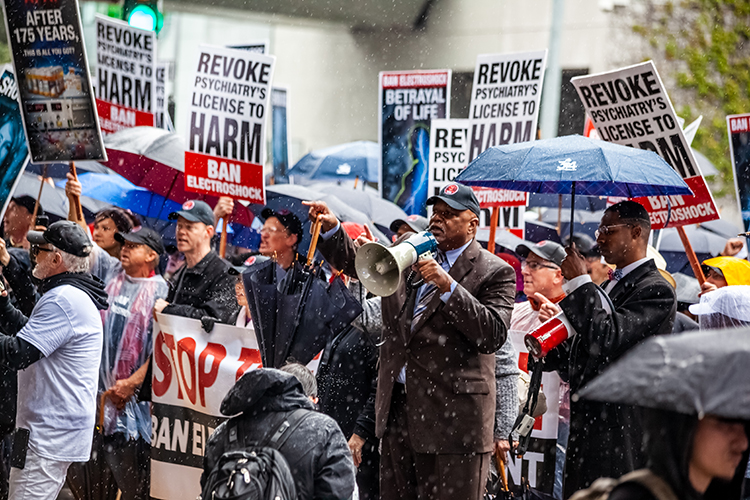 “Racism is a public crisis and inflicted racial trauma on mental health is real, and may lead to deleterious health outcomes, but in and of itself, it is not a physical disease or illness.” – Rev. Fred Shaw

By CCHR International
The Mental Health Industry Watchdog
May 13, 2021

Mental Health Awareness Month started with a national psychiatric congress devoting three days to a discussion about the American Psychiatric Association’s (APA) January 2021 apology for its 176-year pivotal role in reinforcing racism. But in response, Citizens Commission on Human Rights’ Task Force Against Racism and Modern-Day Eugenics has launched a campaign to better educate African-, Hispanic- and Indigenous Americans about the risk of accepting “amends” offered in the form of equal access to and more psychiatric treatments.

CCHR and the Task Force applaud a New York Times article published on April 30, 2021 that also said the APA had a “lot to apologize for,” but wants far greater disclosure of abusive mental health and genocidal practices, so that minorities are given full transparency.[1]

The NYT discussed the APA’s recent admission that psychiatrists stereotyped African Americans as “primitive,” “savage,” and aggressive. The author noted, “White psychiatrists have pathologized Black behavior for hundreds of years, wrapping up racist beliefs in the mantle of scientific certainty….” The article was headlined “Psychiatry Confronts Its Racist Past, and Tries to Make Amends: But there is a lot to apologize for—from Reconstruction to today.”  It said the APA is now “confronting” and “trying to make an amends” and had pledged to institute “anti-racist practices” aimed at ending the inequities of the past in care, which includes access to more psychiatric treatment.

The NYT cited Dr. Jeffrey Geller, the APA’s outgoing president: “This is really historic,” he said in a recent interview in relation to the APA’s apology. “We’ve laid a foundation for what should be long-term efforts and long-term change.”

“That was a red flag to a bull,” stated Task Force founder and spokesperson, Rev. Frederick Shaw, the president of the NAACP Inglewood-South Bay chapter and a spokesperson on racism and children’s rights for CCHR International for nearly three decades. He said that the priorities that are being spelled out with this apology read more like psychiatrists wanting access to more insurance coverage and to eliminate diagnostic biases as though this is going to give African Americans and other minorities access to better diagnosing.

“There is no foundation laid here, other than self-serving. There’s no discussion of how unscientific the diagnoses already given to whites could lead to an even greater overrepresentation of minorities being subjected to mental health treatment that potentially harms instead of helping. Psychiatric diagnosing has not advanced scientifically since the days of slavery,” he said.

The NYT pointed to the 1840 federal census that included a new demographic category, “insane and idiotic.” The results were interpreted by pro-slavery politicians and sympathetic social scientists to find a considerably higher rate of mental illness among Black people in the Northern states than among those in the South.

Further, T.O. Powell, superintendent of the infamous State Lunatic Asylum in Milledgeville, Ga., and president of the American Medico-Psychological Association (the precursor to the APA), “went so far as to outrageously state in 1897 that before the Civil War, ‘there were comparatively speaking, few Negro lunatics. Following their sudden emancipation their number of insane began to multiply,’” the NYT further reported.

Today, it’s a case of pre-racism protests of 2020 and post-protests. In the wake of such public recognition of racism in the country, now, psychiatrists claim African Americans and other minorities suffer trauma—although don’t fully admit to the trauma that psychiatric and psychological studies and practices helped cause. More than 1 in 5 Black and African American people in the U.S. lived in poverty as of 2018. That definitely can be traumatizing, wondering how to feed and clothe the family, and survive. But that’s not a “mental illness”—it’s poverty!

In South Africa, with 90 years of psychological studies claiming black “inferiority,” psychiatrists also labeled the normal reaction to oppression as a “persecution complex.”[2]

Sixteen percent of African Americans today are purported to have a mental illness. According to the pharmaceutical company-funded Mental Health America, more than 19 million Americans struggle with depression, but Black Americans are overrepresented in this number. Then there’s the disingenuous “admission” that there has been “under-diagnosis of major depression, particularly in Black men, and an overreliance upon the use of antipsychotic medications.” Black patients are less likely than white patients to receive “appropriate medication” for their depression, according to a 2008 report published in “Psychiatric Services.”[3]

“You can see where this is going: defining African Americans as having a higher risk than Whites for mental illness, requiring more psychiatric ‘services,’ to take mind-altering drugs that can cause, in some cases, permanent damage, sexual dysfunction, addiction and suicide. This is not the APA now ‘confronting’ and ‘trying to make an amends.’ It’s potentially setting us up for modern-day slavery of the mind,” commented Rev. Shaw.

The “Second Road to Sacrifice”

Rev. Shaw borrowed from a statement from Dr. Johannes Meyer-Lindenberg, former president of the German Society of Psychiatrists, Psychotherapists and Neurologists (DGPPN), who, in 1990, issued a moderate admission of German psychiatry’s role in euthanasia in psychiatric hospitals and concentration camps during WWII. With this role kept secret at war’s end, following the Nuremberg war crimes tribunal, German psychiatrists were put in charge of caring for war-ravaged people to determine the degree of their “psychic damage.”

Meyer-Lindenberg said this was “very painful to the victims, who often had to encounter the very people who once inflicted their tortures; the grim phrase the ‘second road to sacrifice’ was coined.”[4]

The same thing is happening now in the wake of psychiatric racism in America, Rev. Shaw insists. “We are being served up as sacrificial lambs to psychiatry’s alter of abuse, professing help now when it has over a hundred years of destructive racial studies and treatments that need to be atoned for.”

In 2010, the DGPPN issued a stronger admission that Nazi psychiatrists invented the ideas to “scientifically” justify euthanasia—based on eugenics—and they had condemned people, betrayed the patients entrusted to them, lied to them, forcibly sterilized and killed them. At least 250,000 to 300,000 mentally and physically ill people were victims of this, and killings occurred even weeks after the end of the war. The association also named key psychiatrists involved, including former presidents of the organization, that they denounced and stripped them of their titles.[5] It produced its own traveling exhibit about the horrors Nazi psychiatrists had perpetuated, although Rev. Shaw said CCHR had produced a traveling exhibition long before this that had raised awareness to hundreds of thousands of people.

Rev. Shaw says there’s no evidence of this level of apology or atonement with the APA. “Amends means making up the damage, compensating for that damage and putting responsible heads on the block—stripping them of their presidential status—dating back to the father of American psychiatry, Benjamin Rush, a slave owner who signed the Declaration of Independence while pathologizing African Americans as mentally diseased to justify their segregation. Mental health month and current public outrage over racism should not be used to forward an agenda that will use African American trauma to increase profits,” he said.

The Times said psychiatry has a “history of pathologizing Black people — to regard Black communities as seething cauldrons of psychopathology,” as three reform-minded authors put it in 1970 in the American Journal of Psychiatry — and has deterred some Black medical students from entering the profession. “This should remain,” Rev. Shaw said. “We don’t need more Black or minority medical students studying psychiatry as a specialty. They need to study workable medical methods to provide the best medical care possible,” he said.

While acknowledging that emotional problems and racism can impact individuals and that they can need help, he hopes African American doctors reject psychiatry and APA membership—distancing themselves from a racist organization.

He recommended that all medical trainees, doctors and families read the Mental Health Human Rights Declaration on his group’s website that was developed to cover the rights that all should be given, regardless of race, political ideology, religious, cultural or social beliefs, and to fight the systemic abuse of African Americans and people of color.

Quoting from this, Rev. Shaw summed up, “Racism is a public crisis and inflicted racial trauma on mental health is real, and may lead to deleterious health outcomes, but in and of itself, it is not a physical disease or illness. There are no scientific/medical tests to confirm any diagnoses of psychiatric or mental disorder, as there are for medical illnesses and diseases. You have the right to question any psychiatric diagnosis and demand scientific evidence and physical tests to substantiate it.”

[1] Judith Warner, “Psychiatry Confronts Its Racist Past, and Tries to Make Amends: But there is a lot to apologize for — from Reconstruction to today,” The New York Times, 30 Apr. 2021, https://www.nytimes.com/2021/04/30/health/psychiatry-racism-black-americans.html

[2] Dr. A Burke, “Mental Health Care During Apartheid In South Africa: An Illustration Of How ‘Science’ Can Be Abused,” Evil, Law and the State: Perspectives on State Power and Violence, edited by John T. Parry, (Rodopi B.V., Amsterdam, 2006)