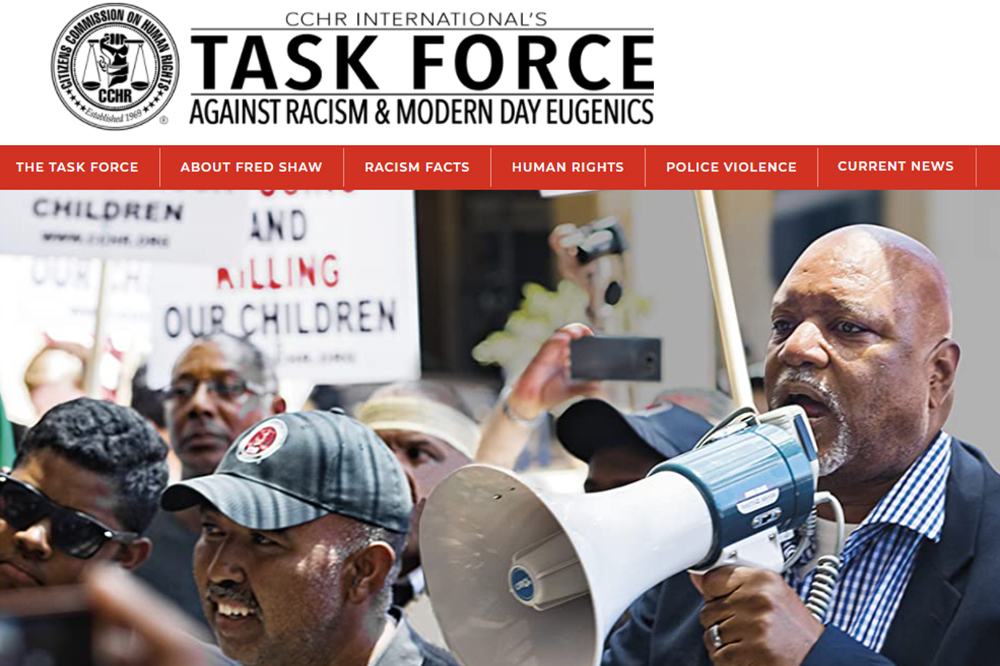 “This training has the potential to reinforce racial profiling that has been occurring since slavery and we don’t need anything that insidiously reinforces this on our streets today.” – Rev. Fred Shaw

As Congress considers prohibiting the use of chokeholds and psychological “killology”-style training of police and Minnesota banning it, calls are made to bring about community safety by eliminating these practices nationwide.

CCHR’s Task Force Against Racism and Modern-Day Eugenics announced its support for current federal consideration of legislation to ban police use of chokehold restraints but it also wants prohibition of such restraint use extended to behavioral institutions, where teens have died. It also seeks federal and state bans on “warrior-style” or “fear-based” law enforcement training, also known as “killology,” started by former West Point professor of psychology, Dave Grossman, more than 20 years ago.[1] CCHR International launched the Task Force last year to raise awareness of these issues. It was founded by Rev. Fred Shaw, a former Los Angeles County deputy sheriff and current president of the NAACP Inglewood-South Bay, California chapter.

In July 2020, the Minnesota legislature banned the use of chokeholds and “warrior-style” training, a move Rev. Shaw commends.[2]

He conveyed how, “As a Black man, I’ve experienced years of racism, but as in any fight, it is the punch you don’t see that knocks you out. There is a source of knock-out, but hidden, oppression that has plagued our community and impacted our law enforcement, that manifests as a callous disregard for life. ‘Warrior-based’ training could be one of the key sources of injustice and violent treatment perpetrated on minorities.”

Craig Atkinson, filmmaker and director of the Tribeca Film Festival Award-winning documentary, Do Not Resist, addressing warrior training, said it “100% has to be put under a microscope and analyzed” and “less people would die.”[3]

The U.S. Justice Department just announced a probe into a “pattern or practice” of unlawful or discriminatory behavior, including training, within the Minneapolis police department.[4] Shaw said that despite the ban on “warrior training” in the state, it takes time to undo the influence of violent and potentially racist training on the thinking of those indoctrinated with it.  He hopes the DOJ investigates this and the developer’s accountability for the training’s potential adverse impact.

Shaw says a nationwide ban on “killology” is needed as well as prohibiting violent restraint use in law and mental health practice. He believes the mindset behind this type of training being steeped in eugenics, the psychological theory developed by British psychologist Francis Galton in 1883, that certain races and the poor were less human than others and should be denied equal rights.

“Based on eugenics, a mindset was indoctrinated into the community that minorities were ‘inferior’ and prone to violence,” Shaw points out. “Eugenics, when practiced in law, education and health care taught that Africans, for example, could hardly rise above barbarism and should be met with the same response.” The Minnesota law outlawing warrior-based training recognized that it encourages officers to act aggressively in a way that “deemphasizes the value of human life or constitutional rights.”[5]

As a former deputy Sherriff, Shaw says it’s a disservice to train police in this method: “Most of the cops I’ve met are good, decent people. They would run into a burning building or risk their lives to save a person of any color or race. I’ve worked alongside the good and the bad. But this training has the potential to reinforce racial profiling that has been occurring since slavery and we don’t need anything that insidiously reinforces this on our streets today.”

Shaw said the Task Force will direct Members of Congress and the Justice Department to Atkinson’s documentary, the Minnesota law and other research on “killology.”

He warned against a 2018 American Psychiatric Association (APA) Position Statement on Police Brutality and Black Males encouraging “collaboration between law enforcement and mental health professionals to develop programs that train law enforcement administrators and officers on racial bias and racial trauma and their impact on the mental health of the communities they serve.”[6] “It sounds benevolent,” Shaw says, “but the full extent of the role of psychological-psychiatric racial profiling since the sixties should first be isolated so that none of these transition into the current agenda to move more mental health into law enforcement training.”

In January, 2021, the APA publicly apologized for psychiatry’s “role in perpetrating structural racism” that “hurt Black, Indigenous, and People of Color.” APA said it did not support major civil rights legislation in the 1960s.

But it went a great deal further, Shaw said. Psychiatrists used the movement to stereotype Blacks as aggressive, with claims that Blacks, when protesting, developed “dangerous aggressive feelings.”[7] Consequently, more African Americans than Whites were diagnosed with schizophrenia, fast tracking them onto antipsychotics, or profiled as criminal to be jailed.

Since 1969, CCHR has been responsible for more than 190 laws that protect against psychiatric abuse. It was responsible for a World Health Organization investigation of South African psychiatric slave labor camps in 1977, helped in the dismantlement of a racist government “violence initiative” targeting minorities in the 1990s and produced the Task Force on racism as a resource for the community.

The Michigan Association of Chiefs of Police (MACP) had invited Dave Grossman to speak at Oak Pointe Church on May 26 and May 27, with the Detroit Metro Times reporting that he trains police in “killology,” his testosterone-laced psychology of killing, which he calls “righteous violence.” Grossman urges police to tap into their inner predator and kill without hesitation, the Times said, while in a video that recently went viral, Grossman tells a class that police “have the best sex” after shooting a civilian.”[8]

On April 27, Detroit Free Press reported that the training session was cancelled. Robert Stevenson, executive director of the police chief’s association, told the Free Press they made the decision to cancel the event after their group and the church had received complaints.

Over the past week, videos of some of Grossman’s previous remarks at training sessions about police shootings—including one about the feeling of sex after killing someone—have gone viral on social media, prompting criticism from advocates of police reform.[9] It implies that after killing someone you will have the best sex of your life.[10]

Ryan Cooper, writing an opinion piece in The Week, appropriately headlined it. “The Toxic Culture of American Police, and said, “Cops are trained to be in a constant state of fear, to view all interactions as fraught with extreme danger, and to always be ready to use violence as a first resort…. For example, departments across the country have hired Dave Grossman, an ex-military motivational speaker who has invented a crackpot doctrine he calls ‘killology,’ to train their officers, and he conducts private trainings the public can attend as well.”[11]

International Business Times pointed out that Grossman spends more than 300 days a year flying across army camps, police departments in the U.S conducting training them for combat, adding “After the death of George Floyd by the hands of Derek Chauvin, Dave Grossman’s ideas have come under scrutiny as he encourages mindless violence and unnecessary use of force and several users of Twitter called him out for his training methods that churns out cops with killing motives.”[12] According to a 2017 article in Mother Jones, Grossman spent over two decades training soldiers how to kill more efficiently.[13]

An article in Daily Kos suggests what CCHR has stated, that accountability for police violence rest also with the training programs. The article states: “Maybe if the loved ones of every unarmed person who was shot by a police officer who took Dave Grossman’s very popular ‘Killology’ course sued Dave Grossman, we could at least get rid of his super toxic course. The police may be immune to suit but Dave Grossman is not.”[14]

[3] “One of America’s most popular police trainers is teaching officers how to kill,” Insider, 2 June 2020, https://www.insider.com/bulletproof-dave-grossman-police-trainer-teaching-officers-how-to-kill-2020-6; https://www.tribecafilm.com/festival/archive/award-screening-best-documentary-2016