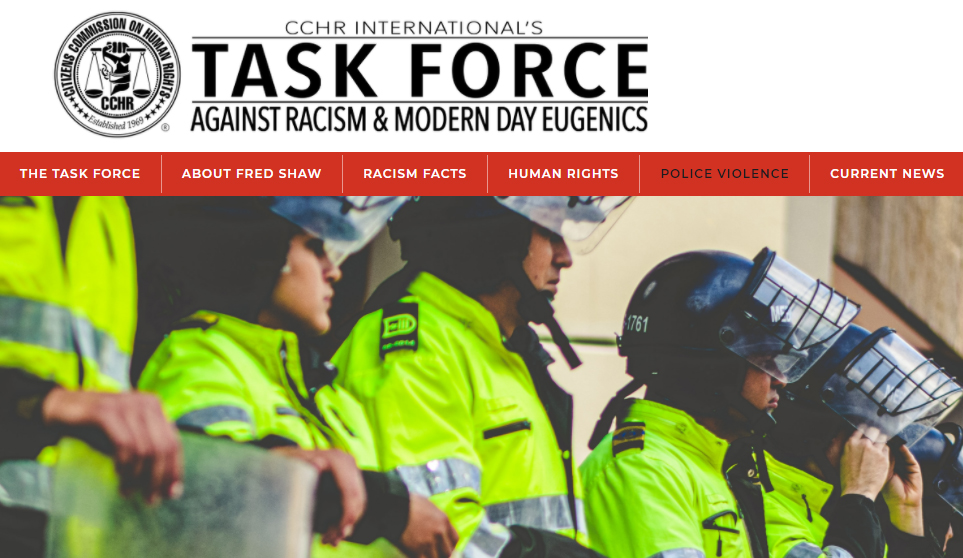 “What psychological or psychiatric methods are still being taught police for racial profiling and training police officers. Clearly, what is being used is not working and is adversely impacting—sometimes lethally—not just minorities but also the police.” – Rev. Frederick Shaw

With numerous articles exposing the dangers of “fear-based warrior-training” recently, CCHR’s Task Force Against Racism adds information to its website, calling on police to investigate the link between psychological training and use of unnecessary force.

The Citizens Commission on Human Rights International’s Task Force Against Racism & Modern-Day Eugenics launched a new educational page and warning on its website about a psychological training program used by police which may induce rather than reduce violence. Craig Atkinson, filmmaker and director of the 2016 Tribeca Award-winning documentary, Do Not Resist, believed the decades-old “fear-based,” “warrior training 100 percent has to be put under a microscope and analyzed” and “less people would die.”[1] Four years later, Task Force founder, Rev. Frederick Shaw, a former Los Angeles County Sheriff’s Deputy, reiterates this need.

Shaw wants to know: “What psychological or psychiatric methods are still being taught police for racial profiling and training police officers. Clearly, what is being used is not working and is adversely impacting—sometimes lethally—not just minorities but also the police.”

“Fear-based” police officer training was developed by former West Point professor of psychology, the former Lt. Col. Dave Grossman.[2] He invented the term and theory of “killology,” defined as: “the scholarly study of the destructive act.” Teaching it for more than 20 years, the premise is that police officers are “at war” on the domestic front and need psychological training to become “warriors” to overcome their natural resistance to killing.[3] It “often runs the risk of the use of unnecessary, and sometimes, fatal force,” a Mother Jones article reported in May 2020.[4]

The training teaches officers to be “emotionally” and “psychologically” prepared to kill. If you’re prepared to kill, Grossman said, it’s “just not that big of a deal.”[5] In a 2004 interview with PBS’s Frontline, Grossman said, “The only way to overcome that resistance [to killing] is through operate conditioning, to make killing a condition reflex. And we’ve done that.” [6]

The July 6, 2016 shooting of a 32-year-old African American man, killed by a Minnesota police officer during a traffic stop, raised the alarm about “warrior” training. The officer had undergone 56 hours of warrior training in 2014.[7] Atkinson called warrior training the “number-one issue” that’s getting people unnecessarily killed by police.[8]

Shaw says that with all police killings, investigations should include whether officers involved were subjected to this type of training. “I am a former law enforcement officer and have been racially profiled for being Black. But not all cops are bad. Most are good, decent people. But we know that racial profiling has been occurring since slavery and eugenics. When this is incorporated into law enforcement training, Black lives can be at serious risk. Police need to know this.”

The Task Force website details the history of behavioral scientists in law enforcement from 1916, when eugenics thrived in the U.S.[9] During the Civil Rights Movement in the sixties, psychologists worked with police agencies following “urban riots.”[10] African Americans marching against racism and injustice were labeled with a mental disorder, “protest psychosis.” The International Journal of Social Psychiatry reported that Blacks developed delusions of grandiosity and “dangerous aggressive dealings” when they joined civil rights sit-ins.[11]

Another leading U.S. police psychologist has come under question, including in a 2015 New York Times article, when his theories were heavily criticized as pseudoscience, “invalid and unreliable.”  The Justice Department denounced the psychologist’s findings as “lacking in both foundation and reliability.” Civil rights lawyers say he is selling dangerous ideas. “People die because of this stuff,” said John Burton, a California lawyer.[12]

Another psychologist, Professor of Criminology and Statistics and a police trainer interviewed for Atkinson’s documentary, takes profiling to a whole new frightening level, Shaw said. The professor purports to be able to forecast criminal behavior using statistical/machine learning procedures.[13] He also claims it can be predicted at someone’s birth how likely they are to commit a crime by aged 18.[14]

Shaw said that a recent article in The Trace showed “the very real concerns we should have.” It stated that “the warrior narrative has existed in law enforcement circles for decades,” with thousands of dollars spent “to teach tactics more suited for war than for civil society.”[15] “Racist training and stereotyping and now infant predictions of who will be become a criminal, is Brave New World at its worst,” Shaw added.

“How much of this is psychiatric or psychological-eugenics based is important to know,” Shaw said. “Racism creates a mindset that is hard to penetrate when its perpetrators are unwittingly programmed and convinced—through ‘science’ and ‘authoritative’ training—that what they are doing wrong is ‘right.’ It masks oppression and violence as ‘protection’ and ‘justice.’ This must change, starting with psychological methods of police training being investigated.”

[1] “One of America’s most popular police trainers is teaching officers how to kill,” Insider, 2 Jun. 2020, https://www.insider.com/bulletproof-dave-grossman-police-trainer-teaching-officers-how-to-kill-2020-6; https://www.tribecafilm.com/festival/archive/award-screening-best-documentary-2016; https://www.tribecafilm.com/festival/archive/award-screening-best-documentary-2016

[5] “One of America’s most popular police trainers is teaching officers how to kill,” Insider, 2 Jun. 2020, https://www.insider.com/bulletproof-dave-grossman-police-trainer-teaching-officers-how-to-kill-2020-6

[14] “This Guy Trains Computers to Find Future Criminals: Richard Berk says his algorithms take the bias out of criminal justice. But could they make it worse?” Bloomberg, 18 Jul, 2016, https://www.bloomberg.com/features/2016-richard-berk-future-crime/