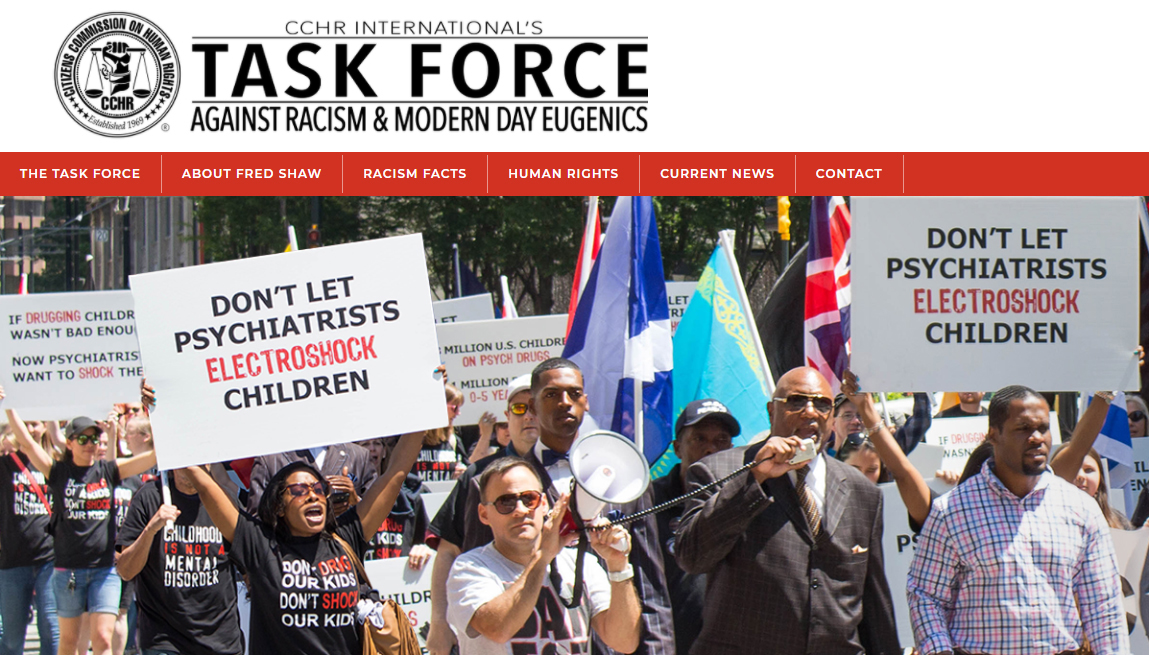 “The Task Force website is needed to educate our community...so that we can address a major source of the modern systemic racism and bigotry that we see today.” – Rev. Frederick Shaw

CCHR and newly formed Task Force develop a website aimed at educating and warning against racially-biased programs, treatment, restraint use, profiling and deaths.

Citizens Commission on Human Rights International has launched a new website for its Task Force Against Racism and Modern-Day Eugenics. The Task Force was formed following highly publicized African American restraint deaths, including 16-year-old Cornelius Frederick in April this year. Frederick was restrained in the Sequel Youth and Family behavioral facility, Lakeside Academy in Kalamazoo, Michigan, for throwing a sandwich on the floor.[1] The deadly psychiatric restraint was a similar method used by police. The Task Force is calling for a nationwide ban on restraint use and other protections against eugenics-based mental health profiling and treatment.

Rev. Shaw explains why he started the Task Force and website with CCHR, “As a Black man, racism displayed its ugly head for many years—from my not being allowed to get on a bus to constant harassment by law enforcement well into my adult life. I watched the unrest of the 1960’s (riots, civil rights marches, disturbing images of Blacks being water-hosed and dogs turned on them.) We observe the events of today and see the same abusive actions against people of color.

“What lies behind the vicious actions against the Black community is what in 1980, I joined the Los Angeles County Sheriff’s department to find out. I was one of the few Black officers that had grown up in the inner-city communities of Compton, Watts and Willowbrook, California, and was socially conscious as a Black man, while also able to see things from a law enforcement point of view. The truth is the two views do not match up.”

What Shaw found was psychiatric and psychological profiling not just of Black Americans but also in police selection, training and treatment. “I had always suspected psychiatry and psychology because of its eugenics origins,” Shaw said. “The facts show that they spread eugenics throughout the world, asserted that Black people were inferior and were unable to be educated. These eugenics-based stereotypes are still with us today, especially in racial profiling. The Task Force website is needed to educate our community of this so that we can address a major source of the modern systemic racism and bigotry that we see today.”

Black children are more than twice as likely as those white to be arrested, but the data shows this disparity is not because Black children are committing more crimes, Mother Jones reported. Rather, they are burdened by a “presumption of guilt and dangerousness.” “This is a legacy of the history of racist psychological profiling, injustice and eugenics,” Shaw added.[3]

Shaw pointed to the weeks following George Floyd’s and Cornelius Frederick’s deaths, when psychiatric groups “were quick to ask for billions of government dollars to ‘treat’ racism—taking advantage of our pain for their own vested interests. This would simply pour more money into a system that is a source of modern-day racism. We needed a website that provided facts that ‘more treatment’ is not a solution to racism; it doesn’t vanish with a mind-altering pill, frequently the first line of treatment offered.”

Sonya Mohammed, former Los Angeles County social worker in foster care, a marriage and family counselor and new member of the Task Force, said the website is “great” for current times. Erick Holly, President of the NAACP Inglewood South Bay branch, said it’s “a really good website” to give “us the information we need to be a leading contributor in the fight for civil and human rights.”

Shaw further commented: “My friend, the late Isaac Hayes, the first non-acting African-American to win an Oscar, and a three-time Grammy winner, once impressed upon me that ‘CCHR has a commitment to improving conditions in the mental health field by exposing abuses like racism.’ This inspired me to work with CCHR to build the task force and the website.”

Well researched, the site includes facts on the history of psychiatric and psychological racism, dating back to slavery and the “father of American psychiatry,” Dr. Benjamin Rush, in the 1700s. It lays out how this has evolved and still impacts modern day mental health treatment and medicine today; the over-representation of African Americans in Special Education and foster care; and in arrests and incarceration.

There’s also a Mental Health Declaration of Human Rights to educate about patient rights and encourages reporting any violation of these rights.

People can also report any racial psychiatric or psychological racism to CCHR.