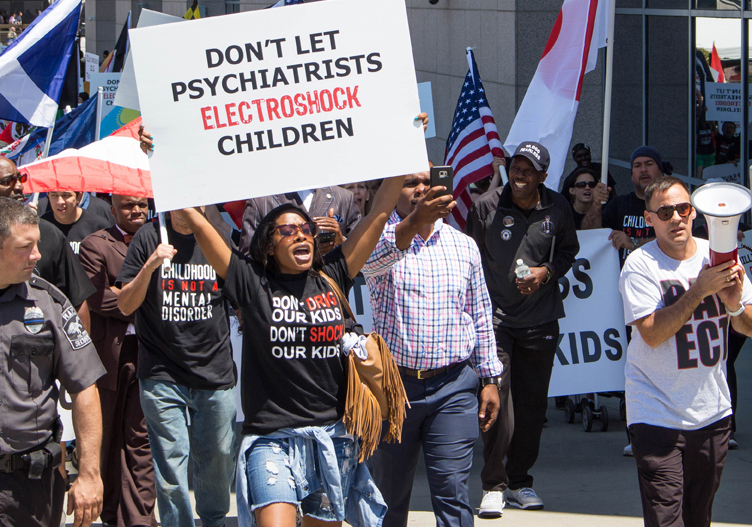 “The American Psychiatric Association is asking the U.S. FDA (which regulates the electroshock machine) to allow them greater access to electroshock children who don’t respond to ‘treatment’ (drugs.) This opens the door for millions of children experiencing side effects from the drugs, to be reclassified as ‘treatment resistant’ and to undergo electroshock as ‘treatment.’” — CCHR International

By CCHR International
The Mental Health Industry Watchdog
May 4, 2018

The mental health watchdog Citizens Commission on Human Rights (CCHR) New York, is holding a rally and march on Saturday, May 5th in New York City to coincide with the annual convention of the American Psychiatric Association. The group is protesting the American Psychiatric Association’s continual push to drug America’s children, along with their recent recommendations to the U.S. FDA that electroshock treatment (ECT) be used on children and teens that are “unresponsive” to psychiatric drugs.

In a letter to the FDA, the American Psychiatric Association stated, “Having access to a rapid and effective treatment such as ECT is “especially meaningful in children and adolescents.”

Currently, 8 million children in the U.S. are being prescribed psychiatric drugs, including antidepressants, antipsychotics, antianxiety drugs and ADHD drugs.  Nearly 800,000 of these children are between the ages of 0 to 5 years old. The drugs children are being prescribed carry more than 409 international drug regulatory warnings including side effects of agitation, mania, psychosis, depersonalization, hallucinations, drug dependence, hostility, aggression and more.

According to CCHR, children are being drugged simply because psychiatry has pathologized normal childhood behaviors, and repackaged them as “mental disorders.” As a result millions of children are being drugged for behaviors reclassified by psychiatry as “disease.” Now the American Psychiatric Association is asking the U.S. FDA (which regulates the electroshock machine) to allow them greater access to electroshock children who don’t respond to “treatment” (drugs.) This opens the door for millions of children experiencing side effects from the drugs, to be reclassified as “treatment resistant” and to undergo electroshock as “treatment.”

Electroshock therapy, or electroconvulsive therapy, is an archaic treatment invented in the 1930s that sends jolts of electricity into the brain, inducing a grand mal seizure. It’s associated with numerous side effects, including short and long-term memory loss, cognitive problems, unwanted personality changes, manic symptoms, prolonged seizures, heart problems and even death.

Psychiatrists claim children are “infrequently” electroshocked, but no state or federal agency is documenting how many children are currently being electroshocked each year. State Medicaid records obtained solely through Freedom of Information Act (FOIA) requests by CCHR have revealed 16 states are electroshocking children, including 0-5 year olds.

The march will commence at 10:30 am on West 46th Street and Broadway.

CCHR is a non-profit mental health watchdog group dedicated to eliminating abuses committed under the guise of mental health. CCHR works to ensure patient and consumer protections are enacted and upheld as there is rampant abuse in the field of mental health.  In this role, CCHR has helped to enact more than 180 laws protecting individuals from abusive or coercive mental health practices since it was formed over 48 years ago.