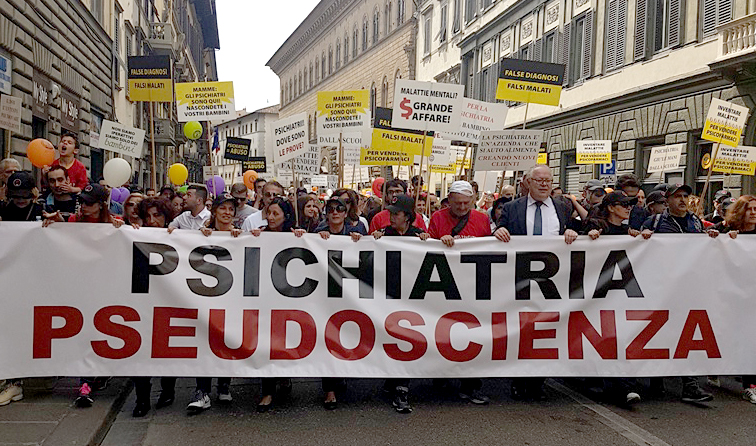 “Over 2000 people marched in the streets of Florence, Italy last weekend to protest against the increasing number of Europeans, especially children, being prescribed dangerous psychotropic drugs.”

Over 2000 people from Italy, France, Switzerland, Germany, Netherlands and Denmark marched in the streets of Florence, Italy last weekend to protest against the increasing number of Europeans, especially children, being prescribed dangerous psychotropic drugs. The Italian chapter of the international mental health watchdog group, Citizens Commission on Human Rights, organized the march, pointing out that more than 33 percent of Europeans aged 18–29 have taken such drugs.

The march coincided with a European Psychiatric Association (EPA) Congress being held in Florence, with CCHR saying the conference promotes drug and other psychiatric interventions that puts Italians and other Europeans’ mental health and lives at risk.

The group marched from piazza Santa Maria Novella to piazza San Marco led by Dr. Roberto Cestari, President of CCHR Italy. Among speakers at the rally was Prof. Vincenza Palmieri, founder of the “Living without Psychiatric Drug” program: “For 30 years I have been seeing families and individuals being trapped in a system that sucks their lives away with the use of mind-altering drugs. We must spread information, knowledge and courage,” to oppose this, he said. 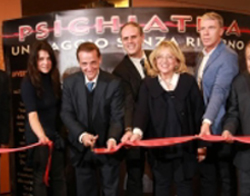 The march was followed by the opening of a world-acclaimed exhibition on psychiatry at the Auditorium del Duomo (via de’ Cerretani 54r – Florence). Called “PSYCHIATRY: SOCIAL CONTROL AND VIOLATIONS OF HUMAN RIGHTS,” it documents the harmful history of psychiatry and its contemporary abuses.  This includes Italy being the birthplace of electroshock treatment that the protesters say should be banned.  More than 90 clinics in Italy still administer electroshock treatment, which was invented by Italian psychiatrist Ugo Cerletii in 1938.  The exhibition is open until April 10 at Auditorium del Duomo, via de’ Cerretani 54r, with free entrance from 10:00 till 19:00.

Prof. Palmieri; Mr. Francesco Miraglia, a lawyer often engaged in defending human rights; and Mrs. Serena Perini, Councilwoman and President of the Florence Town Hall’s Committee on Peace, Human Rights, Solidarity, International Relations, Immigration and Equal Opportunities, thanked CCHR for the extensive information in the exhibit.  The consensus was that without the exhibit, many mental health abuses would have remained unknown.

Psychiatric drug consumption has been increasing in Italy over the past 10 years.  In 2015 they represented the fourth highest group of drugs prescribed in the country, at an expense of 3.3 Billion Euros.

The 25th EPA Congress was held April 1 – 4, 2017. But as CCHR points out, the psychiatric conference had serious conflicts of interest with at least eight pharmaceutical companies sponsoring it, including Janssen, Lundbeck, Sunovion, Pfizer, Pierre Fabre Laboratories, Otsuka, Shire, and Takeda.[1] Many of these companies have paid out millions of dollars to settle lawsuits against them in the United States concerning psychiatric drugs they manufacture.

Another company that financially supported the conference was Magstim that developed transcranial magnetic stimulation (TMS).[2] TMS places a magnetic coil near the patient’s scalp passing a powerful, rapidly changing magnetic field through skin and bone, and inducing electrical currents in the brain.

Some of the conflicts of interest discussed at the Exhibit opening were: