“The safeguards in CCHR’s Declaration are needed now more than ever, charging that Mental Health Awareness Week serves an industry that primarily advocates physically damaging practices that reap huge profits.”

Citizens Commission on Human Rights International (CCHR), a 46-year mental health watchdog warns that the upcoming Mental Health Awareness Week (Oct. 4-10) and World Mental Health Day (Oct. 10), ignores that millions of children’s childhood behavior has been misleadingly redefined as “disease,” stigmatized and drugged for profit and that tens of thousands of our elderly are drugged and electroshocked, damaging their fragile minds and bodies.

The drug “treatments” are so potentially harmful that the United Nations Special Rapporteur on Torture, Mr. Juan Méndez, recommended an “absolute ban on all forced and non-consensual” administration of “electroshock and mind-altering drugs.”[1] 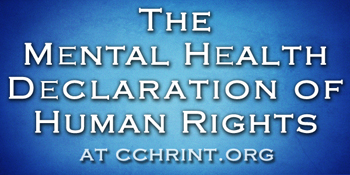 Because such information is often ignored during Mental Health Awareness Week CCHR has launched its updated 1969 Mental Health Declaration of Human Rights, which defines rights, when legally implemented, could save lives and prevent harm. The Declaration insists upon inalienable rights that include no person being forced to undergo psychiatric treatment or denied personal liberty by reason of so-called mental illness.  It also reinforces the need to be fully informed about the lack of medical science in psychiatric disorders (no physical test can confirm them) and the adverse effects of psychotropic drugs and other psychiatric “treatments.”

The safeguards in CCHR’s Declaration are needed now more than ever, charging that Mental Health Awareness Week serves an industry that primarily advocates physically damaging practices that reap huge profits.  The conflicts of interests are not disclosed.

With all this, CCHR’s Declaration needs implementing by law in all sectors of the mental health system, providing each person with the right to:

Kelly Patricia O’Meara is an award-winning former investigative reporter for the Washington Times’ Insight Magazine, penning dozens of articles exposing the fraud of psychiatric diagnosis and the dangers of the psychiatric drugs—including her ground-breaking 1999 cover story, “Guns & Doses,” exposing the link between psychiatric drugs and acts of senseless violence. She is also the author of the highly acclaimed book, Psyched Out: How Psychiatry Sells Mental Illness and Pushes Pills that Kill. Prior to working as an investigative journalist, O’Meara spent sixteen years on Capitol Hill as a congressional staffer to four Members of Congress. She holds a B.S. in Political Science from the University of Maryland.
References:

[14] “One-Third of Seniors with Dementia Are Being Given Antipsychotics,” 21 Apr. 2015, http://www.anh-usa.org/one-third-of-seniors-with-dementia-are-being-given-antipsychotics/