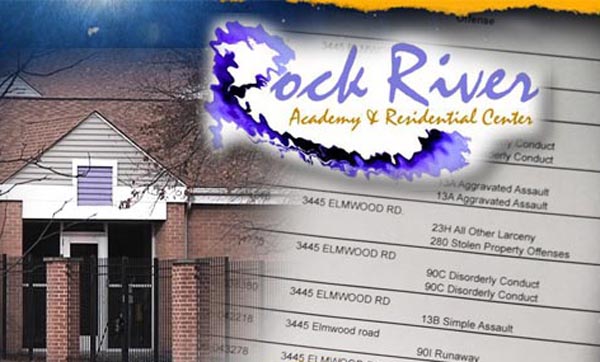 “There were over 350 [police] calls about the facility in a four year period; the latest report was within the past two weeks. Several calls were for assaults, and at least eight were for sex offenses like rape, fondling, and sodomy, and not just among the girls.”

ROCKFORD — Shocking allegations of horrors behind the walls at Rock River Academy were brought to light in a Chicago Tribune article on December 15th, including dozens of claims of sexual abuse inside of the facility. “The staff was having sex with whomever they could have sex with…whoever was vulnerable,” says Fayshawn Petty, a former Rock River Academy resident. “They would bring the girls snacks, candies, cakes…whatever the girls wanted. Even weed and cigarettes,”

There were several reports of physical abuse, and dozens of fights daily. “A lot of girls’ arms got broke(n). Legs, ankles…my finger got broke from trying to get restrained, because I was trying to protect myself,” says Petty.

Fayshawn Petty says she saw it all. She was just 15 years of age when she was sent to Rock River Academy, the 59-bed residential center for girls with behavioral and mental problems in Rockford, Illinois. Petty says her mom got a new boyfriend and kicked her out of the house. She had nowhere to go except into DCFS custody. “I was always calling my DCFS case worker, telling them that these people abuse me. I’m always calling my mama, even though she left me out to the wolves. Always calling my daddy, telling him they are abusing me in here, can you please take me out of Rock River,” says Petty.

Both girls remember the day they arrived at Rock River Academy, like it was yesterday. Petty says she was beaten and assaulted by other girls with no help from the staff. “All the girls were like attacking me. I’m not talking about like verbally attacking; I’m talking about like attack. Like punch you in your face, kick you. Staff was not helping,” says Petty.

She says fights, and even riots, broke out daily. “I could say 15 to 20 fights each day,” says Petty.

A log of police calls obtained by Eyewitness News appears to back that up. There were over 350 calls about the facility in a four year period; the latest report was within the past two weeks. Several calls were for assaults, and at least eight were for sex offenses like rape, fondling, and sodomy, and not just among the girls. Residents describe facility staff flirting with the girls, and trying to have sex with them. Allegedly, the staff was targeting residents that were known to have mental problems. ”They have sex with the girls inside of Rock River. With the girls that are really mentally slow,” says Petty.

According to the residents, one of the staff members, Ellis Simmons, a convicted child sex offender, once worked at Rock River Academy. “There were plenty of girls that said that he touched them,” says Petty.

Then there were the drugs. A Chicago Tribune investigation found that staff administered psychotropic drugs like Thorazine at dosages which were far higher than doses at similar youth facilities. The girls say they were knocked out for hours at a time from the meds. “They just came in there, picked me up and shot me in the butt with that stuff. I swear I was asleep for four days,” says Petty. But, Campbell says the medicine did not knock her out. “Some people it put straight to sleep. It did not put me to sleep,” says Campbell.

Many became desperate to find a way to get out of the facility. About a dozen girls from Rock River Academy were allowed to attend Auburn High School. That is where, Petty says, many girls turned to prostitution. Selling sex, and saving the cash for when the day they escaped from Rock River Academy. “I was trying to survive. So, yes I was one of the ones that left and started prostituting,” says Campbell. Petty says these problems have been happening for years. “Please do not send anyone else to Rock River. I wouldn’t even send my dog there,” says Petty.

Rock River Academy says the recent hold placed upon the facility by DCFS put them in a situation where they can no longer operate, which will force them to close by April. DCFS says they are disappointed in what’s happened at Rock River, and are focusing on ensuring the smooth transition and appropriate placement of all the girls currently housed at the academy.