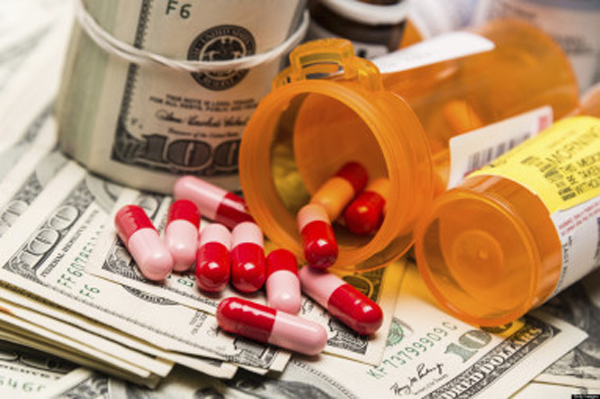 One out of four people has a “mental illness.” You hear the statistic all the time. People who were once “nervous” or “high strung” now have “general anxiety disorder.” People who have the “blues” from real life issues like job, relationship and family problems now have “major depressive disorder.” People who are “up and down,” again from real life issues, are now “bipolar.” Adults who can’t focus on the work at hand, either because they didn’t get enough sleep or because the work at hand is boring — hello? — have adult ADHD. All need to be on drugs indefinitely, perhaps for the rest of their life. And notably, all suffer from diseases that are medical “judgment calls” they can’t be verified on blood or other diagnostic tests. Ka-ching.

Less than thirty years ago, depression was not considered a lifelong illness but a self-limiting condition that would “go away.” Before SSRI antidepressants like Prozac, anxiety was a transient condition requiring a tranquilizer as needed. Key words “as needed.” Once SSRIs became available, anxiety became a chronic condition requiring chronic medication. Suddenly people who had anxious moments were treated for moments they were fine with drugs that changed their entire blood chemistry and were very difficult to quit. Some of the drugs actually made people worse and other drugs were added as side effects were called evidence of “mental illness.”

And there are other examples of the “enlarging” of mental illness diagnoses. Once, only children had ADHD but now adults can join the club. Once only adults had depression and schizophrenia; now Big Pharma markets the conditions in children. What?

There are several sociological factors behind the “psychiatrizing” of America. Direct-to-consumer advertising works and doesn’t just convince people they are “depressed,” it convinces them they have GERD, insomnia and restless legs. Some postulate the ghastly list of risks with drug ads — coma, death, trouble swallowing — perversely “sell” the drug in the way images of skulls and the word “death” were said to sell consumer products in the advertising expose Hidden Persuaders. Also, commensurate with the idea of “lifestyle” medications, many who feel OK or fine right now think they could or should feel better. Even grief, from the death of a loved one, is now a treatable psychiatric disease. Why should you feel bad just because your spouse died? Go on, be happy. 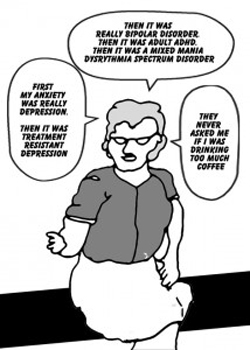 But the main engine behind growing “mental illness” is Big Pharma and Wall Street. Under the pretense of better care, Big Pharma has aggregated and sometimes co-opted patients into lobbying groups for high-priced drugs. While the groups say they fight the “stigma” of mental illness, they spend their time fighting lawmakers and insurers for payment of high-priced drugs. “When insurers balk at reimbursing patients for new prescription medications,” says the Los Angeles Times, these groups “typically swing into action, rallying sufferers to appear before public and consumer panels [and] contact lawmakers.”

How much are the drugs in question? One hundred middle dose pills of the depression drug Abilify can cost $1,644 and Invega, a drug used for bipolar conditions, $1,789. That is more than most people’s rent or mortgage payment.

The patient front groups include the Depression and Bipolar Support Alliance, which gets half its funding from Pharma according to the Los Angeles Times and the National Alliance on Mental Illness (NAMI), which received $23 million in just two years from Pharma, according to the Wall Street Journal. In the 1990’s, Eli Lilly was NAMI’s biggest donor, reported Mother Jones. A woman I interviewed who wants to remain anonymous for medical privacy says she was told by the Chicago NAMI they could not help her with a borderline condition because there was no “drug” for it. So much for helping patients.

Earlier this year, NAMI was successful in defeating a White House proposal to limit Medicare coverage of Wellbutrin, Paxil, Prozac, Abilify, Seroquel and other expensive drug classes. “The proposal undermines a key protection for some of the sickest, most vulnerable Medicare beneficiaries,” said Andrew Sperling, a NAMI lobbyist using the image of elderly victims to give Pharma billions of our taxpayer dollars.

Many top musicians have killed themselves, notes the Times, forgetting that most were philosophically against using music and slick ad agencies to sell products and enrich Wall Street.

“When you look at social change, people that really participate and get social change movements going are young people, and they really need to be involved to change the landscape about mental illness stigma,” said Wendy Brennan, executive director of the New York City Metro chapter of NAMI. You’d think NAMI were working against climate change or for marriage equality and a higher minimum wage instead of selling pills.