The latest wave of psychobabble once again goes to demonstrate that psychiatrists are still looking for the answer to justify the widespread drugging of children and adolescents diagnosed with so-called ‘Attention Deficit Hyperactivity Disorder’ (ADHD).

Scanning the brains of children and adolescents labelled with ADHD is the latest idea being used in an attempt to  bring some credibility to the chemical restraint procedures that are going on in schools today to control poor behaviour.

The use of brain scans however is deeply flawed. While so-called experts may see differences in scans that have been taken, the most likely cause for the changes are prescribed psychiatric drugs. Steven Hyman, former director of the National Institute of Mental Health, admitted that indiscriminate use of such brain scans produce “pretty but inconsequential pictures of the brain.”

Yes, children can be argumentative, boisterous and even disruptive, but is it something wrong with their brain? No. Can children become distracted and not pay attention? Since time immemorial, yes. Is it due to some mental ‘disease’ that can be verified as one would verify cancer or a real medical condition? The answer is no, unless you’re a psychiatrist.

ADHD has never been scientifically validated. For years, the psychiatric profession has been in pursuit of the ADHD Holy Grail – something called a biomarker, defined as something they can actually measure in the body that confirms the existence of a condition. But they’ve never found anything that can be measured, which begs the question of why they would treat a child or adolescent with a drug.

Drugging a child or adolescent makes them more manageable, compliant and keeps them under control. It’s tantamount to a chemical nanny. As for the idea that the drugs address a ‘chemical imbalance in the brain;’ that’s just more psychobabble. Again, there are no tests to substantiate the theory. The ‘experts’ can’t prove it so you are obliged to just believe what they say, but that isn’t science. It’s opinion.

Being fully informed and being allowed to make a fully informed choice must be the order of the day, especially when you are aware of the effects of the mind-altering drugs being prescribed to young minds. 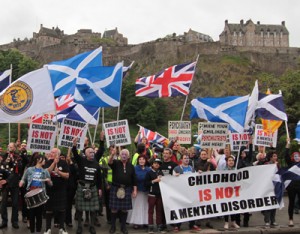