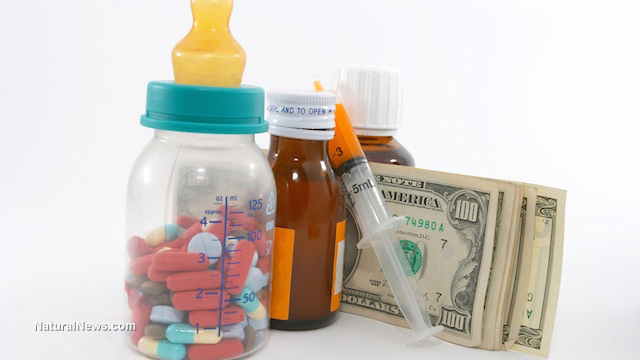 (NaturalNews) No one should use Big Pharma’s toxic drugs to support the myth of brain chemistry imbalances. Even the FDA prohibits prescribing these to children under five. Yet in 2013 the number of babies under one year of age in the USA prescribed dangerous psychotropic drugs was well over a quarter-million.

First of all, psychiatry is a fraud from top to bottom. The Diagnostic and Statistical Manual (DSM-5) contains 300 or more mental disorders that are mostly opinions based on observations. A handful of senior shrinks meet to create a consensus for each edition of this bogus manual. It wouldn’t be so bad if shrinks had stuck to talk therapy.

But a pact with the devil called Big Pharma linked these disorder opinions to imagined brain chemistry imbalances that could only be cured by profitable pharmaceuticals. The premise of brain chemical imbalances has never been scientifically established. It is bogus, and the notion that Big Pharma can come up with solutions without dangerous side effects is even more bogus.

Watch CCHR’s video: “The Drugging of
Our Children—0 to 5 Year Olds

Even the FDA prohibits prescribing psychiatric drugs to children under five. Psychiatrists and doctors are getting away with this “off-label” practice because many of these infants and toddlers are in poor families or foster homes or are institutionalized.

It’s easier for those in charge to deal with supposedly disturbed children under five by drugging them. And there’s nobody to file a lawsuit on their behalf.

Suicide and murder are among the worst side effects from psychiatric drugs when prescribed to teens and adults. Many others ditch taking their prescriptions because of other debilitating side effects. It’s estimated that most who claim to be helped are experiencing a placebo effect. 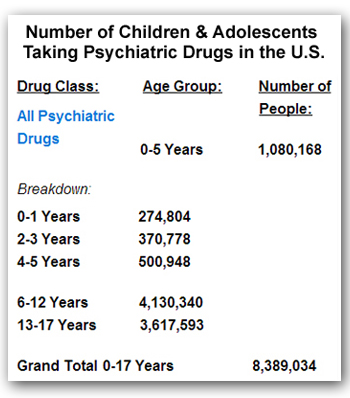 Click on image to view all breakdowns on the number of children and adolescents on psychiatric drugs. (Source: IMS Health Vector One National Database Year, 2013, Extracted April 2014.)

But babies and toddlers don’t have the option of ditching those prescriptions until they become old enough to experience debilitating health issues or simply die from them, as was the case of Rebecca Riley in Boston a few years ago.

The case of four-year-old Rebecca Riley

Her South Boston parents were convicted for murder in 2010. They were accused of intentionally over “medicating” Rebecca, because they were frustrated with not being able to get federal Supplemental Security Income (SSI) compensation for her the way they had with her two older siblings, also on psychiatric drugs.

The drugs that finally killed Rebecca, after being prescribed with increasing dosages by Tufts Medical Center psychiatrist Dr. Kayoko Kifuji, were clonidine for ADHD and Depakote for a bipolar condition, both diagnosed by Kifuji when Rebecca was two years old. Overdosing on clonidine was considered the cause of Rebecca’s death.

Rebecca’s case was a highly publicized event that outraged many because Kifuji was never even indicted. Many jurors who handed Rebecca’s parents the murder conviction openly complained that the psychiatrist, who prescribed Rebecca’s drugs based on only a few 15 minute office visits and Mrs. Riley’s complaints, was never held responsible.

Although Kifuji had voluntarily surrendered her medical license until legal matters were settled, she managed to testify against the Rileys under immunity. Kifuji was defended by Tufts and reinstated as soon as soon as the trials ended.

But some justice was managed by a Boston law firm that created an estate for Rebecca Riley’s siblings and filed a malpractice suit against Dr. Kifuji and Tufts Medical Center.

Due to the publicity with the possibility of some dirty laundry being exposed, Tufts settled out of court for $2.5 million, the maximum amount that their liability insurance would cover.

After attorney fees, the money is being held in a trust for Rebecca’s older siblings. Meanwhile, Dr. Kifuji continues her “practice” with Tufts.