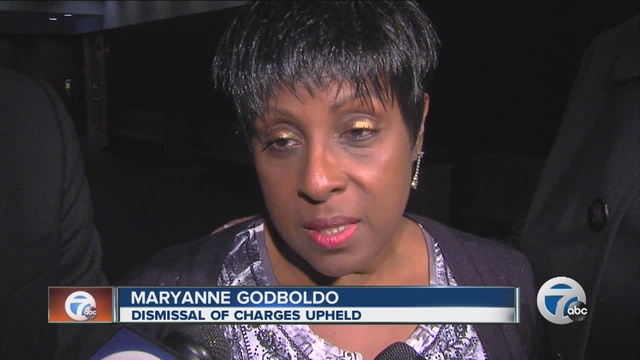 On the continued attempts of Detroit Prosecutors to charge Maryanne Godboldo, Attorney Allison Folmar states, “This is a case of misdiagnosis, misinformation and unrestrained persecution. Five out of five judicial reviews found that Maryanne had the right to defend her home and child. That the prosecution refuses to end this attack is ample proof that she is being persecuted. This case really puts psychiatrists and the pharmaceuticals on trial because they tried to do something that they had no right to do.”

Once Again, Prosecutors have attempted to bring criminal charges against Detroit mother Maryanne Godboldo. And once again, they have failed.

On March 24, 2011, the Maryanne Godboldo case garnered international headlines when images of a battle-ready SWAT team, tanks and a helicopter, were unleashed upon a Detroit mother for refusing to administer a dangerous and potentially lethal antipsychotic drug to her daughter. The illegal seizure of the then 13-year old caused a firestorm of press and public outcry. By December 11th, 2011, nine months and numerous court battles later, Godboldo was acquitted of all charges based on the unconstitutional and illegal seizure of the child.

But Detroit prosecutors seemed hell bent on making an example of Maryanne Godboldo, attempting and failing twice in the last few months to prosecute her. Last Friday, July 11th, 2014, there was loud applause in the court when Judge Gregory Bill reaffirmed the dismissal of criminal charges against the Detroit mother for a second time this year.

Yet, while human rights activists celebrated, prosecutors were already talking to the press about appealing the ruling—preparing for the next assault. A spokesperson for the Prosecutor’s Office stated, “We do not agree with the court’s ruling affirming the dismissal of the case in 36th District Court, and we will be appealing to the Michigan Court of Appeals.”

If that isn’t a vendetta, then what is?

Moreover, one can only wonder why State Prosecutors aren’t pursuing charges against illegal seizure and forced drugging of children with drugs documented to have potentially lethal side effects within the state of Michigan.

This sordid and disturbing tale of criminal persecution began in 2011 when Godboldo chose to fight for the medical well-being of her 13-year old daughter, Ariana, refusing to drug the child with the dangerous, and potentially lethal, antipsychotic drug Risperdal.

With an illegal “rubber stamped” court order in hand, Child Protective Services (CPS) enlisted the services of Detroit’s SWAT team to assault the Godboldo home and forcibly remove the child from the safety of her mother.

Watch the video to see the events that
unfolded in March 2011: Mother Faces
Down Swat Team & Tank For Refusing
to Drug Her Daughter

It took days for Godboldo’s attorneys to locate the child in a psychiatric facility, only to find that the teenager’s prosthetic leg had been taken from her and also had been subjected to forced psychiatric drugging. After nearly two months of legal wrangling, a despondent and drooling Ariana was released into the custody of her aunt, while Godboldo awaited trial for the defense of her child and home.

State prosecutors further attempted to prosecute Godboldo for an alleged “warning shot” fired during the illegal entry by police, in an attempt to seize her child. In March 2014, Judge Giles ruled that given the illegal entry of Godboldo’s home, “…the defendant, in fact, did use reasonable force…to prevent an illegal attachment.” Judge Giles further explained, “The Detroit Police did not have the authority to remove a child at that time…based on the invalid court order that was being used and presented.”

Despite numerous dismissals of the criminal charges leveled against Godboldo by Judge Giles and the appeals court, prosecutors refuse to stop the persecution of this family, even though the court’s rulings have shown that the state, through CPS, violated Godboldo’s rights in an effort to force a dangerous psychotropic drug on this child. 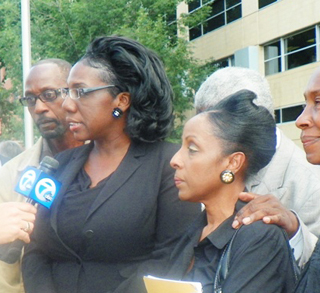 Attorney Allison Folmar (left) with Maryanne Godboldo (right) “This case has far reaching implications for parents, not only in Detroit, but across the country, to choose whether or not to drug their child. It is a case of misdiagnosis, misinformation and unrestrained persecution. Parents need to understand this is not an isolated case and it is happening across the nation far too often.”

Allison Folmar, Godboldo’s attorney and champion, lays out the judicial evidence of the continued persecution.

“Five out of five judicial reviews,” explained Folmar, “found that Maryanne had the right to defend her home and child. That the prosecution refuses to end this attack is ample proof that she is being persecuted.”

In essence the court ruled that Godboldo had the right to defend her child from being forcibly drugged with a potentially lethal psychiatric drug, which carries four drug regulatory agency warnings, citing death as a possible side effect.

“In many ways,” says Folmar, “this case really puts psychiatrists and the pharmaceuticals on trial because they tried to do something that they had no right to do. There are a multitude of lawsuits against the pharmaceutical company that makes Risperdal.  This is a devastating, harmful drug that should not have been prescribed for this child.”

Folmar has no doubt that Maryanne will prevail, regardless of the prosecution’s continued persecution, and acknowledges that because of the illegality that took place in Godboldo’s case many positive changes have occurred in the state and even across the country.

The evidence of the wrongdoing on the part of CPS against Maryanne Godboldo is made clear in the policy changes enacted since the illegal siege. “The changes that have occurred,” says Folmar, “are amazing.” For example, no more can emergency removal orders be “rubber stamped,” probation officers are prohibited from signing orders and the CPS no longer will investigate cases of parents who refuse to drug their child.

Folmar sums up what she and many within the state believe transpired in the Godboldo case: “This case has far reaching implications for parents, not only in Detroit, but across the country, to choose whether or not to drug their child. It is a case of misdiagnosis, misinformation and unrestrained persecution. Parents need to understand this is not an isolated case and it is happening across the nation far too often.”

The courts have repeatedly ruled in favor of Godboldo and her actions to protect her child, so the only question that remains is who benefits from the over-zealous prosecution? One can only wonder how deeply embedded the pharmaceuticals and psychiatric industry have become within the State’s child protective services.