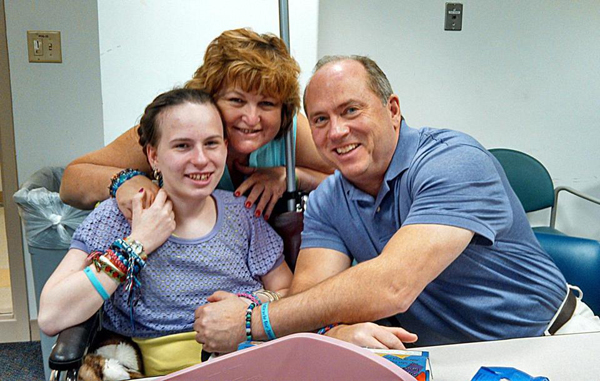 “Think of it like a prisoner of war who has been held captive for 16 months, there will be an adjustment period.” - Lou Pelletier, whose daughter Justina was forcibly incarcerated in a psychiatric ward against her parent's wishes and based solely on a psychiatrist's opinion.

A Massachusetts judge ordered the 16-year-old Connecticut girl, who was taken from her family by child welfare advocates more than a year ago, to be returned to her mother and father effective Wednesday. The ruling caps a long-running medical custody dispute that began when two highly-respected Boston hospitals clashed over the girl’s diagnosis. The case sparked national outrage, and led Lou and Linda Pelletier, of West Hartford, Conn., to wage a bitter legal battle.

“To hear the news is overwhelming,” Lou Pelletier told FoxNews.com moments after learning of the ruling. “Now we can certainly begin the healing process.”

The case began when the girl’s parents disagreed with a psychiatric diagnosis given by Boston Children’s Hospital and said they wanted their daughter returned to her original physician at Tufts Medical Center, who had previously treated Justina for mitochondrial disease, a group of rare genetic disorders affecting cellular energy production. The Massachusetts Department of Children and Families moved in, claiming Justina was the victim of “medical child abuse.”

Mat Staver, of the Liberty Counsel, which battled the Bay State bureaucracy on behalf of the Pelletiers, said the ruling handed down by Massachusetts juvenile court Judge Joseph Johnston was well-deserved.

“We are thrilled that Justina will finally be returning home,” Staver said in a statement. “The family looks forward to putting this 16-month nightmare behind them. Justina and her family now begins the process of healing both physically, emotionally, and spiritually.”

In May, Justina was moved from Massachusetts to a facility in Thompson, Conn., allowing her parents to visit with their daughter, but doing little to dampen their determination to win her back for good. In a 45-second, videotaped plea, first posted on a Facebook support page last week, Justina is seen sitting in a chair and pleading plaintively with Johnston.

“All I really want is to be with my family and friends,” the girl says, her voice faltering at times. “You can do it. You’re the one that’s judging this. Please let me go home.”

The judge granted the girl’s wish, after the Massachusetts DCF filed a motion agreeing that the teenager should be returned to her family. Alec Loftus, a spokesman for Massachusetts Health and Human Services Secretary John Polanowicz, confirmed to FoxNews.com last week that the agency was no longer planning to fight the case.

The emotional toll on Justina and her family is one that cannot be measured, Staver said. She has missed out on two years of education, Staver said, and went from becoming a competitive figure skater to being confined in a wheelchair.

Lou Pelletier said he knows his daughter will need time and love from her family to overcome her ordeal.

“She’s coming home tomorrow,” he said. “I think she will want to get adjusted.

“Think of it like a prisoner of war who has been held captive for 16 months,” he continued. “There will be an adjustment period.”