BOSTON (MyFoxBoston.com) — A doctor who was part of an FDA advisory panel on electric shock therapy says the Judge Rotenberg Center is not reporting device malfunctions that randomly shock students to the government as required.

“We have no data on how often this device is malfunctioning,” said Dr. Steven Miles, a physician who served on a panel advising the U.S. Food and Drug Administration on the devices used to deliver the shocks. “Any time that you have a medical device failure, in this case administering random shocks, you cause trauma to people. And in this case you traumatize people with learning disabilities.” 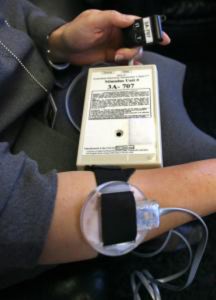 It’s by no means clear that the judges who are currently approving the use of this device on humans are fully aware that this is a non-approved device,

The Canton-based Rotenberg Center, the only place in the country using the devices, disagrees, saying the misfires don’t meet the FDA reporting standard of causing death or serious injury.

The FDA, however, is not so sure.

“FDA has not yet determined whether they would be required to be reported as (a medical device malfunction),” FDA spokesperson Jennifer Rodriguez told FOX Undercover in an email.

In any case, the Center told FOX Undercover the misfires happen only in “extremely very rare circumstances” and improvements to the devices that deliver the shocks should further reduce their chance of happening.

A former Rotenberg Center student, Jennifer Msumba, told the panel that the devices “misfire a lot.”

“That happened to me in double digits, where it would go off by itself maybe if it got wet,” she said, according to a transcript of the hearing.

The panel ultimately voted to recommend banning the devices, which are known as GEDs, or Graduated Electronic Decelerators. It is now up to the FDA to decide whether go along with the recommendation.

It’s the latest step in a decades-long controversy over the shock devices, which are used nowhere else in the country. The Judge Rotenberg Center and its ardent supporters say the shocks are used as a last resort on the most difficult cases.

One promotional video from the center highlights the kind of troubling behavior the school says it can stop with the use of the shock devices: students punching themselves, banging their heads and forcing themselves to vomit.

But the world got a different look at the shocks in 2012, when video of their use on former student Andre McCollins first aired on FOX 25 and then went viral. The video shows McCollins being shocked for refusing to take of his coat, and then restrained and shocked for hours, punctuated by McCollins’ screaming and grunting as he’s in four-point restraints. The ordeal left him hospitalized.

The video was played in court as part of a civil suit brought by his mother. The case settled before the jury delivered a verdict.

But the video gave new fuel to critics who have wanted to end the practice.

The FDA originally said the new devices did not need approval, but changed its mind in 2011. The Rotenberg Center says it’s trying to get FDA approval and blames the FDA for the delay.

Nevertheless, Dr. Miles told FOX Undercover that the device should be recalled immediately.

“The JRC device is not approved for the use on humans. It is four times stronger than any other device that is currently FDA approved,” he said.

Miles also raised the question of whether the Massachusetts probate judges who must sign off on the device’s use on every patient are aware of the lack of FDA approval.

“It’s by no means clear that the judges who are currently approving the use of this device on humans are fully aware that this is a non-approved device,” Miles told FOX Undercover.

The Rotenberg Center says the courts are “fully informed”.

A court spokesperson said, “The Probate & Family Court is looking into this, and if there is a problem, it will be addressed.”