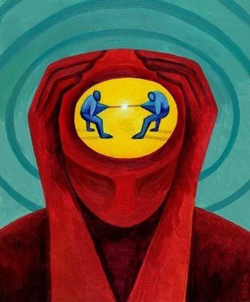 “Is the crisis an epidemic of 'mental illness,' or has treating emotional suffering as a biological medical condition disabled individuals and communities while ignoring problems that could be addressed?”

I was told to lower my life expectations.

I am the Executive Director of a Connecticut mental health advocacy organization. Since the unspeakable tragedy at Sandy Hook, my colleagues and I have been working tirelessly to combat proposed reactionary and discriminatory rights stripping legislation.

As I write this article, news of another shooting fills the airwaves. Again, psychiatric reasons are being identified as the cause. This country, and much of the world, is talking about a “mental health crisis.” Hundreds of millions of dollars are being allocated to increase treatment of “mental illness.”

There is a mental health crisis in this country, but I disagree with the popular conception of what the crisis is.

Our country’s shift over the last seventy years to viewing troubling emotional experiences as medical conditions has led to an epidemic. Instead of contextualizing intense experiences—looking at root causes of suffering—we have labeled and medicated social constructs found in the Diagnostic and Statistical Manual.

Where has this approach taken our country?

People entering the public mental health system are dying 25 years younger than the rest of the population.(2) Psychiatric drugs are the first, second, and third option for people in distress—including children. The growth in ADHD and bipolar diagnoses is staggering.

Is the crisis an epidemic of “mental illness,” or has treating emotional suffering as a biological medical condition disabled individuals and communities while ignoring problems that could be addressed?

Passion for the work I do stems from my experiences. I experienced intense suffering as a child and I reached a point where I could no longer tolerate my world. I consciously and thoroughly contemplated whether or not to summon the courage to ask for help—or take my own life.

I chose the former and entered the ‘disease model’ mental health system. I was told I had a permanent brain condition and that I would need medication for the rest of my life.

I was told to lower my life expectations.

I complied for many years and endured countless side effects, several diagnoses, and constant symptoms.

I finally had enough and sought my own ways of finding peace. I courted oblivion with gambling, alcohol and unhealthy relationships. I proceeded down a long dark road of addiction that ended in grave destruction.

Eventually, I ended up in a rehab facility where I met people that inspired me to look within for healing. This started a journey that has included a love of yoga and meditation and an understanding of the importance of nutrition for emotional health. I have quieted the demons in my head and now lead a fulfilling and enjoyable life. As a result of profoundly positive experiences within the holistic health world, I am currently pursuing a master’s in holistic healing.

Dr. Andrew Weil coined the term “medical hexing” to describe doctors that take away hope, and often potential for healing, from their patients. In the mental health world hexing happens on a daily basis. People are labeled and told they have a “chemical imbalance” or a “brain disease,” that they will require medication for the rest of their lives.

They are often encouraged to seek social security disability—because the stress of full-time work may be too much for their “disordered” minds.

If a person believes that there is an innate part of them that will negatively influence their life and that this negative influence is largely out of their control, they often forfeit ambitions and dreams to complacency.

Believing that suffering is a permanent pre-disposition to be wary of—without entertaining hope of suffering being a transient experience—often leads to a surrender of personal agency and resolve. People who have been through this diagnosis process often disengage from life and arrange their days around avoiding “symptoms”, instead of moving toward their goals and dreams.

It is time we allow space for people, including children, to be their true selves without  needing to be “fixed” or made “normal.”

If people need assistance moving forward in life, it is time we look for healing within the context of their lives, and value their individual experiences, including past traumas which are often ignored when giving a diagnosis. Healing solutions tend to reside in people’s narratives and not in textbooks.

In order to build community and mitigate violence we need to move away from a system that brings about repression and marginalization. Rather than simply labeling and medicating, we ought to encourage each other to engage painful aspects of our lives, make changes, endure struggle, and triumph over hardship and fear.

Deron Drumm is the Executive Director of Advocacy Unlimited, an organization that fights for social justice and collaborates with individuals through the lens of human and constitutional rights.  Deron openly and honestly talks and writes about his experience “hitting bottom” in order to demonstrate where emotional distress and addiction can lead and how through intentional living one’s life can be reshaped.  He has a passion for bringing holistic wellness and hope to people experiencing distress.