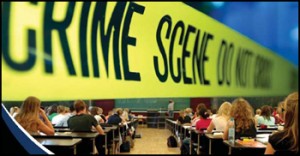 "This isn't guess work anymore, there is a direct correlation between psychiatric drugs and senseless acts of violence.  Is this another case of drug induced violence?"

Another mass attack by a knife-wielding teenager, leaving 20 people injured with four suffering serious, life-threatening, wounds. While the investigation has only just begun, one cannot help but wonder if this incident isn’t yet another psychiatric drug induced act of school violence?

The fact is at least 32 school shootings and/or school-related acts of violence have been committed by those taking or withdrawing from psychiatric drugs, six of which were stabbings, resulting in 164 wounded and 76 killed. The all too common denominator among perpetrators is psychiatric drugs—yet no federal investigation has pursued this as a valid line of questioning in determining what prompts these violent attacks. 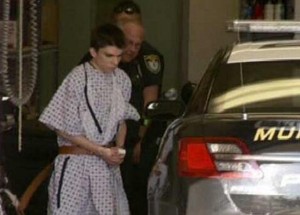 Photo credit @realtimwilliams/CBS Pittsburgh
According to NBC News the alleged 16-year-old attacker, Alex Hribal, was not bullied, had friends and by early accounts was a normal kid.

According to NBC News the alleged 16-year-old attacker, Alex Hribal, was not bullied, had friends and by early accounts was a normal kid. Shane Molyneaux, a student at Franklin Region Senior High School told NBC News that “I don’t know what could possibly motivate him to do it.” Another student reported that the suspect “is a quiet kid” and “he wasn’t a kid who would do something like this.”

So the standard reasons provided for such attacks (loner, Goth, dark personality) don’t seem to hold water in the latest of a string of mass attacks at America’s schools. While it is unknown whether Hribal had been diagnosed with any mental disorders and prescribed psychiatric drugs, given the increasing number of school-related acts of violence committed by individuals under the influence of, or withdrawing from, psychiatric drugs, the question has to be asked: had he been prescribed psychiatric mind-altering drugs?

Just last week, Ivan Lopez, killed three and wounded 16 others at Ft. Hood Army base. Almost immediately, the base commander reported that Lopez had been treated for mental illness, was on “medication” and prescribed Ambien and other psychiatric medications for anxiety and depression.

One can only hope that Hribal’s drug history will be made public and not shrouded in a veil of secrecy like the mental health history of Sandy Hook shooter, Adam Lanza. Despite a year-long investigation of the Newtown shooting, the last five years of the shooters mental health records remain secret.

Ablechild, a parents rights organization, sued the State of Connecticut for access to Lanza’s autopsy report and medical/mental health records, but were denied the records. Why? Assistant Attorney General, Patrick B. Kwanashie, explained the reason for the denial of Lanza’s records was because “it would cause a lot of people to stop taking their medications.”

What medications? If the Sandy Hook shooter was taking medications, why would this be a concern to the Attorney General’s office?

The Food and Drug Administration (FDA) reports that between 2004 and 2012, there have been 14,773 reports to the MedWatch system on psychiatric drugs causing violent side effects, including more than 1,500 cases of homicidal ideation/homicide, 3,287 cases of mania and nearly 8,300 cases of aggression. And the FDA estimates that less than 1% of all serious events are ever reported.

The increased drugging of America’s children isn’t a secret. According to the Centers for Disease Control and Prevention (CDC), prescription drug addiction is now the fastest growing drug problem in the United States.

In 2010, more than 250 million prescriptions for antidepressants were written for Americans, with the average teen being prescribed 1.2 central nervous system drugs. And children in the United States are three times more likely to be prescribed psychotropic drugs as children in Europe.

This isn’t guess work anymore, there is a direct correlation between psychiatric drugs and senseless acts of violence. These are real data worthy of serious consideration and debate. How many more innocent people must be harmed? The public should demand legislators and law enforcement pursue the most common denominator to these mass killings, prescribed psychotropic drugs.