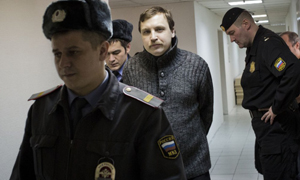 Mikhail Kosenko, 39, last week became the highest profile case when he lost his appeal case against enforced psychiatric treatment. As such he will be interned immediately at a state-owned medical facility in Moscow. At worst, his sentence could be for life, with no chance of parole, as his release depends on vaguely described criteria. His assessment will also be made by doctors whose political neutrality is not guaranteed.

In 2012, Kosenko was arrested by Moscow police after taking part in a peaceful protest against Putin in Bolotnoya Square. Charged with rioting, he spent much of the next twenty two months behind bars. When his sentence was read out in court last October, his sister Kseniya, told the BBC : “I have an awful feeling. There are really frightening stories about what goes on in these places.”

Kosenko did have a pre-existing psychiatric condition when he was arrested – slow on-set schizophrenia diagnosed in 2001. But after medication and good advice, the condition was very much under control. Kosenko had never shown any tendency to be violent, according to his doctors.

“Mikhail’s case simply reminds me of the Soviet Union,” Lokshina warns. She tells how punitive psychiatry was a tool that was rarely used, but always with devastating effect. “Back then the medications used were really heavy, they were designed to slow down movements and just keep you out of the way.”

It’s impossible [to] know exactly what treatments are now in store for Kosenko. But whatever is to come, it will only end if Kosenko dies, renounces his politics, or wins a final case of appeal at the Supreme Court. This is his last chance, but it could be some time. Lokshina remembers that when Pussy Riot took an appeal case to the Supreme Court, they had to wait a year before their case was heard. In the meantime, Kosenko’s treatment will continue.

The only medical evaluation the court heard was conducted by the Serbsky Institute in Moscow. Their crebility was disputed by medical experts, including the head of Russia’s Independent Psychiatric Association, when they noted that the assessment had completely omitted any reference to Kosenko’s successful ten years of self-medication, with no history of violence. Serbsky Insitute is also owned and operated by the state. The judge threw out a petition to have a second medical assessment.

Lokshina tells me there have been a few cases recently – but this is by far the worst. Amnesty International call it “an abhorrent return to Soviet-era practices.” The weeping sister of Kosenko told the BBC she felt “physically sick” when she heard that her brother had been found guilty.