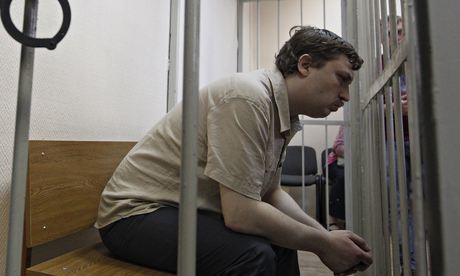 Mikhail Kosenko during a court hearing in May 2013. A judge found him guilty despite video footage showing that he had tried to move away from a scuffle in which a riot policeman was struck. Photograph: Maxim Shemetov/Reuters

"In Mikhail Kosenko’s case, the courts are returning to an abhorrent practice that is redolent of the worst of Soviet-era tactics to crush dissent: the use of forced psychiatric treatment as a means to punish critics."
Sergei Nikitin, Amnesty International’s Moscow Office Director

The decision by a Moscow court to detain a protester in a psychiatric institution is a “Soviet-era tactic” designed to crush dissent, says Amnesty International.

The Moscow City Court yesterday (25 March) upheld a conviction against Mikhail Kosenko, a peaceful protester who had been sentenced to be detained in a psychiatric institution for “treatment”.

The court denied Kosenko’s lawyers’ request for an additional psychiatric evaluation after his legal team had argued that the original evaluation was incomplete, full of inconsistencies, and had cited Kosenko’s political beliefs as supposed evidence of his mental illness.

Kosenko was arrested after he took part in a protest in Bolotnaya Square in central Moscow in May 2012, which turned violent. He was charged with taking part in “mass riots” and using violence against police officers – accusations that Amnesty considers to be politically motivated and contradicted by strong evidence not taken into account at Kosenko’s trial.

“The courts are returning to an abhorrent practice that is redolent of the worst of Soviet-era tactics to crush dissent: the use of forced psychiatric treatment as a means to punish critics.

“The court appeared to disregard numerous inconsistences and distortions of facts in the psychiatric experts’ report and police testimonies, as well as to ignore the evidence supporting Mikhail Kosenko’s innocence.

“The gross injustice done to this man must be rectified and he must be released immediately and unconditionally.”