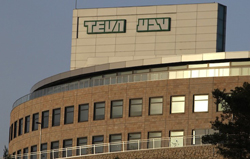 An Illinois doctor who had become notorious for overprescribing a powerful antipsychotic medication was paid to push the drug by its Israeli manufacturer, according government prosecutors who have settled the case out of court.

Teva Pharmaceutical Industries Ltd. has agreed to pay more than $27.6 million to settle allegations that it provided Chicago psychiatrist Michael Reinstein with financial incentives to prescribe clozapine to patients.

Clozapine [also known as Clozaril] can cause serious side effects, including seizures, heart-muscle inflammation and a reduction in white blood cells.

Reinstein was found to have prescribed more clozapine to patients in Medicaid’s Illinois program than all of the doctors in the Medicaid programs of Texas, Florida and North Carolina combined, according to ProPublica.

The investigative news website also reported that Reinstein had prescribed the drug to Medicare patients, despite the risks clozapine poses to the elderly.

At least three of the doctor’s patients died of clozapine intoxication.

Medicare had continued to allow Reinstein to prescribe even after Illinois’ Medicaid program suspended payments to the doctor and federal prosecutors accused him of fraud.

The settlement reached between a Teva Pharmaceuticals subsidiary, IVAX, and Illinois Attorney General Lisa Madigan and the U.S. Justice Department will result in $15.5 million going to the federal government and more than $12.1 million paid to Illinois.

“Pharmaceutical companies must not be allowed to improperly influence physicians’ decisions in prescribing medication for their patients,” Zachary Fardon, U.S. Attorney for the Northern District of Illinois, said in a statement. “Instead, those decisions must be made solely on the basis of the patient’s best medical interests.”