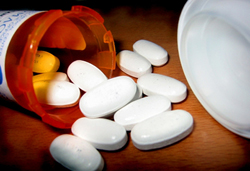 On Dec. 3, 2004 President George W. Bush signed into law an amendment to the Individuals with Disabilities Education Act (IDEA), the “Prohibition on Mandatory Medication Amendment,” as part of the reauthorization of the Individuals with Disabilities Education Act. The Amendment prohibits Child Study Teams or other school personnel from discussing medication for a child or recommending any medication or requiring medication for children as a condition for educational and remedial or special education services.

Basically, the Amendment implies that any discussion of medication for a child should be between the parent and physician and nobody else. Yet, this law is violated in New Jersey and around the nation. In short, the use of psychotropic medication should not be used irresponsibly.

(A) IN GENERAL. – The State educational agency shall prohibit State and local educational agency personnel from requiring a child to obtain a prescription for a substance covered by the Controlled Substances Act (21 U.S.C. 801 et seq.) as a condition of attending school, receiving an evaluation under subsection (a) or (c) of section 614, or receiving services under this title.

(B) RULE OF CONSTRUCTION.- Nothing in subparagraph (A) shall be construed to create a Federal prohibition against teachers and other school personnel consulting or sharing classroom-based observations with parents or guardians regarding a student’s academic and functional performance, or behavior in the classroom or school, or regarding the need for evaluation for special education or related services under paragraph (3)”.

According to Jim Gottstein, a Harvard trained lawyer and the Director of “PSYCH RIGHTS- THE LAW PROJECT FOR INDEPENDENT RIGHTS”:

“Currently, due to the massive growth in psychiatric drugging of children and youth and the current targeting of them for even more psychiatric drugging, PsychRights has made attacking this problem a priority. Children are virtually always forced to take these drugs because it is the adults in their lives who are making the decision. This is an unfolding national tragedy of immense proportions. As part of its mission, PsychRights is further dedicated to exposing the truth about these drugs and the courts being misled into ordering people to be drugged and subjected to other brain and body damaging interventions against their will”.

James P. Morris, Ph.D. and George Stone, LCSW reported in an article in the Journal of Marital & Family Therapy that the use of such medication for children is unwarranted. Gottstein has presented data that indicates that children who receive psychotropic medications for long periods are more likely to become drug-addicted as adults. Moreover, there is a higher rate of suicide among these children.

It is time for the FDA to carefully scrutinize the medications that are prescribed for children and to more faithfully enforce the “Prohibition on Mandatory Medication Amendment”.