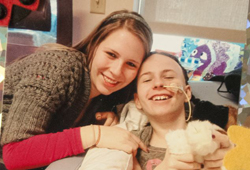 “[M]ental health services had dug in its heels and had decided that Justina could not be released. Her parents were faced with security guards and served a 51A, a report of alleged physical or emotional abuse. To add insult to injury the Pelletiers were accused of over-medicalizing their daughter. Can anyone else see the irony in this?”

15-year-old Justina Pelletier was diagnosed with mitochondrial disorder, a chronic, genetic disorder that occurs when the mitochondria of the cell fails to produce enough energy for cell or organ function. From that point on she was being treated by physicians at Tufts Medical Center.

Her parents, Lou and Linda Pelletier, took her for a routine visit to a Connecticut Children’s Hospital back in 2013. Justina had come down with the flu, which can affect mitochondrial disease sufferers in a more pronounced way than the average person.

Because of this, Justina was, on the 13th February 2013, transferred to the Boston Children’s Hospital.

The following day, on the 14th of February, her parents went back to the Boston Children’s Hospital with a couple of advocates intending to have her discharged and returned to Tufts.

By now, mental health services had dug in its heels and had decided that Justina could not be released. Her parents were faced with security guards and served a 51A, a report of alleged physical or emotional abuse.

To add insult to injury the Pelletiers were accused of over-medicalizing their daughter. Can anyone else see the irony in this?

Since when did mental health care about how many illnesses teenagers were diagnosed with or how many prescription drugs teenagers took? If anything, it’s mental health services who dish out more harmful drugs to kids than your average drug pusher standing on a street corner, it’s also mental health that label kids at the drop of a hat with fictitious mental disorders.

Justina was transferred to Boston Children’s Hospital’s Bader 5 psychiatric unit on April 9, 2013. There she was treated for somatoform disorder. According to a document from Boston Children’s given to the Pelletiers, Justina’s treatment included a “behavioral plan formulated with input from all relevant disciplines which will day schedule, feeding and functioning plans with a therapeutic approach.” Physical therapy was included as well.

Pretty safe to assume then that Justina would have been treated with some kind of “mental illness” drug. And these knuckleheads had the audacity to accuse Justina’s parents of ‘over-medicalizing’!

This is just utterly ridiculous. Exactly who is the ass in charge here? Which knucklehead oversees operations here? Has anyone within mental health got an actual brain in their head? Why on earth are they disputing Justina’s diagnosis, furthermore, why have they held this 15 year-old girl prisoner for the last year? 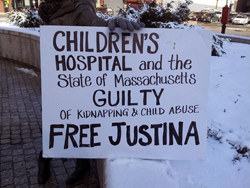 Justina’s parents are, today, holding a rally to create awareness about the abhorrent treatment of Justina and her incarceration at the hands of mental health buffoons who couldn’t tell their own arse from their elbow.

Support is growing via the Protest for Justina Pelletier’s Custody To Be Returned To Her Parents Facebook page and also via Twitter and other social networks.

Your child has a rare disorder. They develop the flu and you know that this could cause them problems. You take them to hospital because you are, obviously, concerned. Your child is then taken away from you, locked in a mental health unit and [we can only assume] drugged up to the eyeballs with drugs that can increase suicide, cause diabetes and that are highly addictive.

Let’s hope these half-witted morons involved in the decision making are brought to task over their treatment of this young girl.

What an utter embarrassment.

Definition of hospital, by the way… an institution providing medical and surgical treatment and nursing care for sick or injured people.

…then mental health get involved.

Utter madness from these white-coated lunatics!

If you decide to retweet this story please use #FreeJustina as a hashtag.