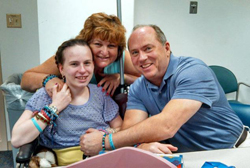 Parents Lou and Linda Pelletier claim their daughter hasn’t been receiving proper education or treatment after she was placed under the custody of the state of Massachusetts.

A number of forces are fighting over the care of Connecticut teen Justina Pelletier. Parents Lou and Linda Pelletier agree with doctors at Tufts Medical Center who claim Justina has mitochondrial disease. But Boston Children’s Hospital diagnosed Justina with a mental illness and accused the Pelletiers of over-medicating their child. The state of Massachusetts has assumed custody of the teen while the battle rages on.

One year after Justina Pelletier was locked into a psychiatric ward at Boston Children’s Hospital, doctors, lawyers, and family members are still struggling to answer the question—is this teenager really in pain?

Doctors at Tufts Medical Center diagnosed Justina Pelletier with mitochondrial disease, a genetic disorder that affects how cells produce energy and can wreak havoc on nearly all of the body’s life-sustaining systems. But on Feb. 10, 2013, another group of doctors at Boston Children’s Hospital decided that the 15-year-old’s disease was psychosomatic—which meant that Pelletier’s problems were caused by a mental illness and not by physical ailments. When her parents attempted to take Pelletier back for treatment at Tufts, Boston Children’s called in the cops.

The young girl was then thrown into a custody and medical battle that has been raging for more than a year. Justina is still under custody of the state of Massachusetts, but her parents haven’t stopped fighting to get her back.

“We are David, not against Goliath, but against two Goliaths— Boston Children’s Hospital and the State of Massachusetts,” dad Lou Pelletier told ABCNews.com. “To me it’s a hopeless cause and the only way to win is in the court of public opinion.”

Justina was placed in a state psychiatric ward for nearly a year. In January, she was transferred to a temporary residential program in Framingham while the court battles continue. The next hearing has been scheduled for Feb. 13. In the meantime, Judge Joseph Johnston has placed a gag order on all parties involved in the trials. 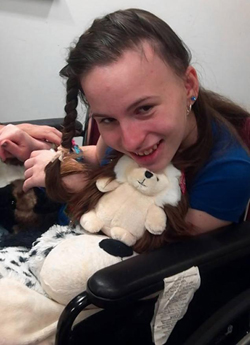 Justina was was placed in state custody in a psychiatric ward at Boston Children’s Hospital for nearly a year after the hospital diagnosed her with Somatoform Disorder.

Justina’s parents have only been allowed supervised visits with their daughter, which only last for one hour every week. They say her condition deteriorated during her time at the psych ward.

“She is going off a cliff,” Pelletier said of his daughter, who is now confined to a wheelchair. “She looks awful and is pale and her hair is falling out. Her gums are receding and she has no body strength.”

Until her medical troubles started, Justina was a normal young girl. She loved figure skating and her family, who live in West Hartford, Conn. Justina’s older sister Jessica was diagnosed with mitochondrial disease by Dr. Mark Korson, chief of metabolism at Tufts. When Justina started feeling sick in 2010, her parents took her to Tufts for an evaluation. She eventually came under the care of Korson, who diagnosed her with the same disease as her sister, then treated her with a “vitamin cocktail” and a number of other prescription medicines.

Her condition seemed to be looking up until February 2013, when she came down with the flu. Korson recommended that the family take the girl to a colleague at Boston Children’s Hospital.

Justina was taken by ambulance to Boston Children’s, where a young emergency room doctor told the family that he “didn’t believe” in mitochondrial disease, ABC reports. A medical team at the hospital came up with a new treatment plan, which Lou Pelletier says was created without input from doctors from Tufts.

The new plan stated that Justina’s “medication regimen will be simplified with a gradual reduction of medications to a small set of essential, non-detrimental, modestly dosed medication with limited side effects.” 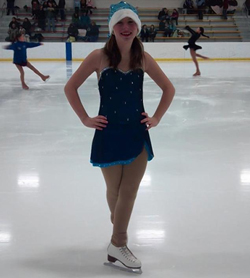 Last January, Justina was competing in ice-skating competitions. Just a year later, the teen is confined to a wheelchair.

The family refused to sign this new plan and attempted to check Justina out of Boston Children’s on Feb. 14, 2013. The hospital responded by accusing the parents of child abuse for over-medicating their daughter and refusing to give her access to mental health therapy.

The state then assumed custody of the girl. The Pelletier’s say they are “frustrated” about the fact that they are no longer allowed to make medical decisions for their daughter.

“I have a right as a U.S. citizen to take my daughter to what doctor I want to, and it’s been taken away,” Linda Pelletier told Fox.

“We are proud of their work and positive impact on the patient,” the statement read. “[O]ur clinicians are particularly distressed that the inaccuracies surrounding this case have caused undo concern for the many children and their families with mitochondrial disorders in our care. Misleading reports suggesting that the hospital holds patients in its inpatient psychiatric unit do not recognize the role of DCF as the legal guardian or the challenges inherent in finding appropriate lower acuity facilities for certain patients.” 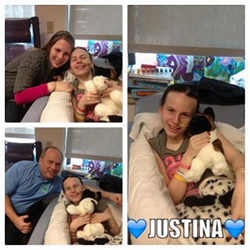 Justina Pelletier is a 15-year-old from West Hartford, Conn.

But Justina’s parents say they were caught between the two methods of treating their daughter’s medical symptoms. And they insist that they never meant her harm.

“Every procedure she had done was not pushed by us, but by the medical community. Insurance never would have covered it if it were not medically necessary,” Lou said.

Advocates for Justina have started campaigns to help bring Justina home. Diane O’Leary, executive director of The Coalition for Diagnostic Rights, said that it is possible that Justina’s medical issues stem from a combination of physical and mental symptoms.

“Doctors are absurdly reckless when they exclude a medical investigation in favor of a vague somatoform diagnosis. It’s always a guess,” she said. “This is a battleground where doctors and patients are fighting for authority.”

Despite the gag order, Lou Pelletier is continuing to speak up for his daughter. He says that his daughter has suffered greatly after doctors cut her off from the medicines she was taking with Korson. He also claims that she hasn’t been getting a good education.

And Justina has reportedly snuck notes to her family saying that she is constantly in pain.

“The system has failed,” Lou said. “I am battling the medical world that thinks it knows everything.”