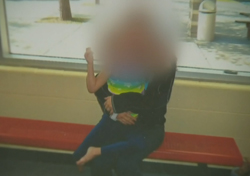 “She was also on Zyprexa, it’s a bi-polar and schizophrenic medication, which my daughter was neither.” — mother of an 8-year-old girl who died in foster care

The mother of an 8-year-old girl who died Sunday in the care of the province is speaking out.

The woman, who cannot be identified, said the only information she received from officials is that her daughter’s heart stopped in her sleep; 911 was called and paramedics tried to revive her.

“There was absolutely no response in her system whatsoever,” she said.

“Inside I feel very empty, and I know that answers would help fill that emptiness, and it just makes it hurt more.”

On Thursday, the woman told CTV News her daughter was in foster care for less than a year before she died; she was taken away last January, after they were evicted from their home. She said she was living with family to help with finances, and the province classified her “unstable”. Throughout the year, she said she visited her daughter and attended parenting courses.

“If she were with me, she would still be alive – that I think is the one thing I’ll never be able to let go.”

The woman said her daughter moved from a group home, to a foster home, then back to a group home where she died. She said officials put the girl on several medications to deal with aggression and hyperactivity; she was 7 at the time.

“She was also on Zyprexa, it’s a bi-polar and schizophrenic medication, which my daughter was neither.”

She said she watched her daughter’s health deteriorate; before entering the system, she said her daughter was 68 lbs. but by the time she died her weight was down to 37 lbs.

“If the system just changes enough and we affect one child, then my daughter’s death was not in vain.”

On Wednesday, the government revealed 150 children have died in their care in the last 14 years. To help improve the child intervention system, the province announced future plans for a roundtable discussions with experts.

“There is a lot we can learn from the death of children. We need to learn from them because we need to prevent as many as we can across the board,” said Human Services Minister, Manmeet Bhullar.

The family of the deceased is expecting more information about the girl’s death in the coming weeks, after an autopsy is complete. A funeral for the 8-year-old is planned for Tuesday, January 14.