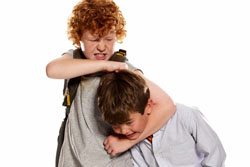 “Treating ADHD as a disease is a huge mistake.” — Richard Saul, M.D., Author of ADHD Does Not Exist: The Truth About Attention Deficit and Hyperactivity Disorder

Pop quiz: Is the proportion of American children suffering from the disease known as attention deficit and hyperactivity disorder . . .

The correct answer is (c), says neurologist Richard Saul in his forthcoming book, “ADHD Does Not Exist: The Truth About Attention Deficit and Hyperactivity Disorder” (HarperWave), which is sure to cause controversy when it comes out in February. 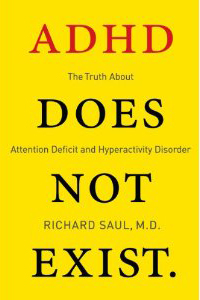 After a long career treating patients complaining of such problems as short attention spans and an inability to focus, Saul is convinced that ADHD is a collection of symptoms, not a disease, and shouldn’t be listed in the American Psychiatric Association’s Diagnostic and Statistical Manual.

Treating ADHD as a disease is a huge mistake, according to Saul. Imagine walking into a doctor’s office with severe abdominal pains and simply being prescribed painkillers. Then you walk away, pain-free. Later you die of appendicitis.

Patients show up at the clinic with their own ADHD diagnoses these days, simply because ADHD is in the air all around us — and because they want to score some delightful drugs like Adderall or Ritalin, or because their parents want an easy way to get them to sit down and shut up.

Adderall and Ritalin are stimulants, though, and the more you take them the more you develop a tolerance for them, which can lead to a dangerous addiction spiral.

The term attention deficit disorder was made official in 1980, when it appeared in that year’s edition of the DSM (the label changed to ADHD seven years later). Subsequent editions have steadily loosened the definition, and diagnoses have skyrocketed accordingly — from 7.8% in 2003 to 9.5% in 2007 to 11% in 2011. That’s one in nine children, two-thirds of them boys, who are being slapped with the ADHD label. Two-thirds of these children have been prescribed a stimulant.

“ADHD makes a great excuse,” Saul notes. “The diagnosis can be an easy-to-reach-for crutch. Moreover, there’s an attractive element to an ADHD diagnosis, especially in adults — it can be exciting to think of oneself as involved in many things at once, rather than stuck in a boring rut.”

In private practice, Saul found himself wondering, what other problems do these patients have besides being easily distracted? One girl he treated, it turned out, was being disruptive in class because she couldn’t see the blackboard. Correct diagnois: myopia. She needed glasses, not drugs.

A 36-year-old man who complained about his addiction to online games and guessed he had ADHD, it turned out, was drinking too much coffee and sleeping only four to five hours a night. Correct diagnosis: sleep deprivation. He needed blackout shades, a white-noise machine and a program that shut all his devices off at midnight.

A young man who asked, “Can’t you just ask me a few questions and write me a prescription?” simply left the office when Saul started probing too deeply into whatever was ailing him.

One by one, nearly all of Saul’s patients turned out to have some disease other than ADHD, such as Tourette’s, OCD, fragile X syndrome (a genetic mutation linked to mental retardation), autism, fetal alcohol syndrome, learning disabilities or such familiar conditions as substance abuse, poor hearing or even giftedness. A boy who was disruptive and inattentive in math class (but no other) was, simply, bored by the material and needed to be advanced a grade to regain his concentration.

In a few cases, there was simply no diagnosis. One adult who thought she had ADHD and had been prescribed stimulants by another doctor got a different take from Saul. He advised her to instead return to her habit of exercising regularly and cut back on work hours.

“I now realize it wasn’t ADHD,” she told him later, pleased with the progress she made as a result. “It was just life.”

The explosion in ADHD diagnoses and related prescriptions of stimulants is not without substantial costs. Potentially addictive drugs are not to be given out like Skittles.

“I know of far too many colleagues,” Saul writes, “who are willing to write a prescription for a stimulant with only a cursory examination of the patient, such as the ‘two-minute checklist,’ for ADHD.”

Two minutes to jot down a prescription may lead to years of consequences: short-term side effects of stimulants include loss of sleep, increased anxiety, irritability and mood problems. Over the long term, use of these drugs can lead to unhealthy weight loss, poor concentration and memory, even reduced life expectancy or self-destructive behaviors not excluding suicide.