“In December 2010, Fan had been subjected to physical and psychological torture for 56 days, including electroshocks when she refused to take medication.”

The authorities continue to lock up and feed drugs to those who struggle for citizens’ rights, a practice that violates China’s own laws. Under the latter in fact, only certified psychiatrists (not government officials) can have someone committed. One of the cases involves a 71-year-old activist held in hospital and fed drugs. In others, some inmates are subjected to electroshock.

Beijing (AsiaNews/CHRD) – Chinese authorities continue to use psychiatry as a punitive tool against activists and petitioners defending citizens’ rights and the rule of law.

In a recent report, the Chinese Human Rights Defender (CHRD) documented a number of cases of forced detentions and abuses inflicted inside hospitals.

Such violations breach China’s own Mental Health Law, which took effect on 1 May 2013. Under its provisions, only certified psychiatrists, not government officials, can commit mental patients to a facility for treatment.

However, official criteria for assessing local government’s performance, issued by the Health Ministry on 6 July 2012, require local authorities to commit to an institution a quota of people with “severe mental illnesses.” In one case, the quota was set at no less than 0.2 per cent.

To meet the goal, local authorities end up going after activists and ordinary citizens guilty of “disrupting order” or “creating trouble”. 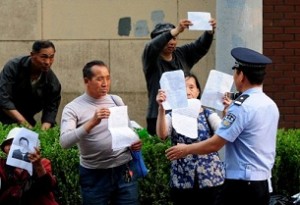 One of the cases cited by the CHRD is that of Fan Miaozhen, a champion of people’s land rights, who was committed for a third time to a psychiatric hospital in Chongming County (Shanghai).

Local government officials had the 71-year-old committed without medical approval on 17 October in retaliation for her activism. She was released two days later, but was fed pills and drugs whilst in custody.

In December 2010, Fan had been subjected to physical and psychological torture for 56 days, including electroshocks when she refused to take medication.

The story of Xing Shiku, from Heilongjiang Province, is equally serious. In early 2007, he was committed to a psychiatric hospital in the city of Harbin where he has been languishing for the past six years after he complained about corruption and violation of labour rights.

In an interview, he spoke about the abuses he received: tied up in chains, he had hospital staff administer electric shocks to his head even though doctors at the facility confirmed that he did not suffer from any psychiatric disorder.

In Loaoning province, police placed activist Zhang Haiyan in a psychiatric unit at the Fengcheng City Fourth Hospital, after holding him in custody for 42 days.

Committed on 11 October, Zhang was released after twenty days when he signed a letter promising he would not express critical views online, or conduct “abnormal petition activities”.

During his stay in hospital he was treated with drugs.

Finally, petitioners Wang Shuying and Gu Xianghong were locked up for some time in a psychiatric ward, without medical treatment.