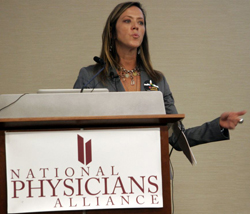 A decade after the suicide of her husband, who was prescribed the antidepressant Zoloft for insomnia, she’s speaking out to physicians, legislators, U.S. agencies.

The hitch was a little case of nervousness, she said, as she was one of the few people in the room without a medical degree. But there she stood, telling dozens of doctors seated in front of her and a broad Internet audience how to fight the “selling of sickness.”

Her “grand rounds” presentation, an honor in the medical world, was an unlikely first for Witczak, a Minnesota native and Minneapolis resident with a career in marketing and advertising. But she has gained entree into major segments of the health care community over the past decade, having emerged as a key figure in the push for the “black box” warnings on antidepressants for possible suicidal side effects.

Prompted by the 2003 suicide of her husband, who was prescribed the antidepressant Zoloft for insomnia, Witczak has traveled to Washington roughly 50 times. Often, she testified before the U.S. Food and Drug Administration, which has named her as a patient advocate to an advisory committee on psychiatric drugs.

“She’s a dedicated and courageous spokesperson who has lobbied Congress and the FDA to see to it that people are adequately informed about the risks and benefits of pharmaceuticals,” said Michael Baum, one of her lawyers in a suit against Pfizer, Zoloft’s producer.

Witczak is working to build a broad coalition to counter what she believes is the improper influence of profits, politics and publicity in drug and device development. “My role is the ability to bring people together,” she said.

In February, Witczak, 47, teamed with New York University medical school Prof. Leonore Tiefer to stage a “selling sickness” seminar in Washington to combat what they believe are undue commercial influences that distort medical research and the delivery of care. The seminar included doctors, lawyers, whistleblowers, consumer groups, academics and regulators.

Tiefer is a well-known sex therapist who for years has battled what she sees as attempts by drug companies and devicemakers to manipulate sexual issues for profit. She joined Witczak in the grand rounds presentation but did so as an equal, not a mentor.

Tiefer calls this “doing a Masters and Johnson,” a reference to sex researcher Dr. William Masters and his assistant, Virginia Johnson, who didn’t even have an undergraduate degree. Witczak and Tiefer, who turns 70 in February, make for an odd couple, but they share a mission — changing the culture of medical care.

“I think each of us has something that the other one needs to do what we want to do,” Tiefer said.

Witczak says her husband never would have taken Zoloft if he had been told of possible side effects that could cause suicide. Witczak’s husband didn’t know the risks, because the prescribing physician, his longtime family doctor, didn’t know either.

As proof, she offers an internal memo showing that the drug company chose not to discuss the issue with general practitioners.

“We never questioned the drug because it was given by a doctor, and it was FDA approved,” Witczak told the physicians.  Read the rest of the article here: http://www.startribune.com/business/230299931.html