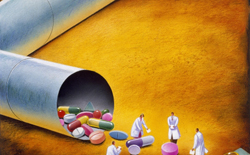 “Thanks to psychiatric overreach, every quirk is judged a mental disease, especially if the US$300-billion-a-year pharmaceutical sector has a pill for it....”

Today it seems that almost everyone is certifiably mad. According to critics, amateur and professional psychiatrists are routinely guilty of “diagnostic inflation”: turning normal people into mental patients with alphabet soup diagnoses. In a new book, America’s Obsessives, author Joshua Kendall argues that many great people have been shaped by obsessive compulsive personality disorder.

Other widely applied questionable labels include disruptive mood disregulation disorder, which may mean nothing more than children’s temper tantrums, and social anxiety disorder, which may be shyness. Thanks to psychiatric overreach, every quirk is judged a mental disease, especially if the US$300-billion-a-year pharmaceutical sector has a pill for it, the theory goes.

Meet florist Caren Ragan, who says she has taken every psychiatric test under the sun. Much mental health diagnosis is subjective, Ragan says.

Her mental health ordeal stemmed from declaring her intention to divorce her ex-husband who, at the start of a 10-year court battle, branded her “paranoid-delusional”, she says. Six times during her ordeal, Ragan took one of the most commonly used personality tests in mental health: the Minnesota Multiphasic Personality Inventory.

Her answers were consistent, she says, but the diagnosis depended on the examiner. The verdict varied from “normal” to severe psychosis with paranoid delusions. “Which was pretty strange considering I worked, raised a family and volunteered at school and not one single person ever noticed this severe mental disorder,” she says.

Ragan adds that she was prescribed several kinds of anti-depressants for real, related depression; all worked briefly before she decided she had no time to indulge in emotional problems, which are a luxury of rich countries, she says.

In the developed world, the mental health industry is booming. According to psychologist Carole Stovall, an expert in anxiety complaints such as post-traumatic stress disorder, mental health prescription rates have “skyrocketed”.

Stovall is appalled that doctors prescribe psychotropic drugs to children as young as six months. “This is shameful. Clearly, society is over-prescribing,” she says. True, she adds, careful medication can help a patient. But medication is often used “off-label”, which can be detrimental. All medication has side effects, she says.

In fact, medication can make you crazy. According to the mental health watchdog the Citizens Commission on Human Rights, common and well-documented side effects of psychiatric drugs include mania, hallucinations, depersonalisation, suicidal ideation, psychosis, heart attack, stroke and sudden death. Read rest of the article here: http://www.scmp.com/lifestyle/health/article/1339739/how-zealous-psychiatrists-are-diagnosing-quirks-mental-illnesses