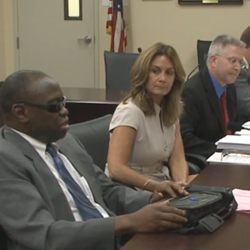 “The group, AbleChild, contends that the Office of the Chief Medical Examiner in Farmington is improperly blocking their access to records for Adam Lanza using an informal department policy.”

Saying the public should know more about whether psychiatric drugs motivate homicidal behavior, a New York-based group is appealing to the full panel of Connecticut’s Freedom of Information Commission to obtain the post-mortem records and drug history for the teenager who killed 26 people at Sandy Hook Elementary School ten months ago.

The group, AbleChild, contends that the Office of the Chief Medical Examiner in Farmington is improperly blocking their access to records for Adam Lanza using an informal department policy.

That policy limits release of the records to Lanza’s family, investigators, insurance companies with an interest in the death, doctors treating Lanza and parties in civil litigation. The policy also says that ‘legitimate’ scientific research organizations can access the data, if they kept Lanza’s identity concealed and people with written consent from the Lanza family can also obtain the records.

The Commission is scheduled to review the hearing officer’s report at its Oct. 23 meeting.

In its objections to the September ruling, AbleChild says that policy runs counter to the state’s public records laws and that the rule was made without any public process where the group could’ve objected. It also contends that the hearing officer didn’t decide on the legality of the policy in the Sept. 25 decision, but rather that it “abdicated her basic duty under law.”

The group says that there is “overwhelming evidence” that link psychiatric drugs with an increased risk of violence and suicide. It says that the public knowledge of whether medications influenced Lanza’s actions is particularly important because new state laws enacted after Sandy Hook call for increased mental health screenings and drug treatments.

Records related to Lanza, his victims and the Sandy Hook shooting have been the subject of heated debate throughout the state almost since the day of the incident. Connecticut state lawmakers rushed to block public release of some records from the day of the shooting at the end of the state legislative session this spring, saying they sought to protect the privacy of the Newtown families.

In an effort to quell criticism of that law from open government advocates, lawmakers established a task force to come up with recommendations for the future of the state’s records laws. That task force met in Bridgeport earlier this month and at that meeting, Sheila Matthews-Gallo of AbleChild told the panel that they should refrain from changing the state’s open records laws while challenges are still pending.

The task force is required to submit its recommendations on that issue to lawmakers by Jan. 1. Lawmakers will then have to decide whether to turn any of those recommendations into state statute.