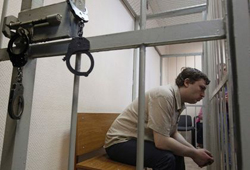 Mikhail Kosenko, committed to a psychiatric hospital for an indefinite period of time. Maxim Shemetov/REUTERS

“Amnesty International condemned the verdict as 'abhorrent use of punitive psychiatry to silence dissent.'”

The condemnation this week of protester Mikhail Kosenko to forced psychiatric treatment has sparked debate that Russia is returning to the Soviet practice of punitive psychiatry to silence its critics.

Kosenko, who had been taking medication for several years for a mild form of schizophrenia, was given a new, more serious diagnosis during his 16-month arrest, and declared dangerous and in need of indefinite isolation from society in a report cited by prosecution.

Amnesty International also condemned the verdict as “abhorrent use of punitive psychiatry to silence dissent” and a breach of trial procedure.

Kosenko, who was convicted of assaulting a police officer at an anti-Vladimir Putin protest on May 6, 2012, was declared insane and dangerous due to his “paranoid schizophrenia” by Russia’s Serbsky Institute in July 2012.

The same institute was behind a wave of diagnoses used to lock-up Soviet dissidents in the Soviet era, with the practice becoming especially widespread between mid-1960s and the breakup of the Soviet Union.

“The psychiatrists of the Serbsky Institute… are as unprincipled as in the Soviet times, and are also carrying out political orders, which is even more dangerous,” wrote Natalia Gorbanevskaya, who herself was committed into asylum for over two years after protesting the Soviet invasion of Czechoslovakia in 1968. Read the rest of the article:  http://www.rawstory.com/rs/2013/10/10/psych-ward-verdict-for-russian-protester-a-return-to-soviet-psychiatric-persecution-of-dissidents/