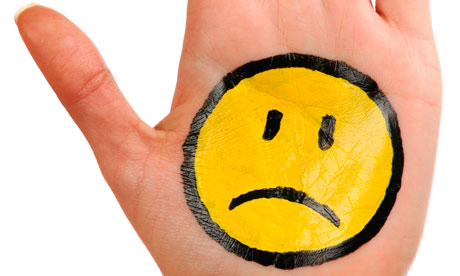 "Sometimes I am just sad. Sometimes pissed off. Sometimes smothered in darkness. But we often lump all these experiences together simply because pharmaceutical companies have developed a certain sort of treatment."

If you have a terrible job or home life, being unhappy is hardly inappropriate. Pathologising it can only make everything worse

by Giles Fraser
I was trouble at school. “Like a monkey at the zoo, Giles is intent on displaying himself from his least flattering angle,” said one teacher in my term report, a document strewn with words like “disruptive” and “unfocused”. Thank God this was in the early 80s, otherwise I bet someone would have suggested Ritalin. For, since the mid 80s, society has decided that adolescent trouble-making is some sort of medical condition. We have given it a scientific-sounding classification, ADHD. securing a sense that a messy adolescence is pathological, some sort of chemical imbalance. Thus the scientists are called in to reinforce generally conservative norms of appropriate behaviour. In the US, between 1987 and 2007, there was a 35-fold increase in the number of children being classified as having some form of mental deficiency.

Of course, there are alternative narratives of my trouble-causing. I hated school because I wanted to live by a different story to the one proposed by the British public school system. Or, maybe, I preferred having fun to reading Chaucer. That may be a less noble account, but hardly pathological, or in need of some medical classification. But deviation from social conformity is increasingly seen to be something in need of a pill. In the UK in 1999, there were 158,000 prescriptions written for Ritalin. In 2010 it was 661,463.

The same thing has happened with depression and drugs like Prozac; though calling it depression is already to classify a particular kind of experience as something quasi-medical, thus leading one to think in terms of medical treatment. Sometimes I am just sad. Sometimes pissed off. Sometimes smothered in darkness. But we often lump all these experiences together simply because pharmaceutical companies have developed a certain sort of treatment. And, once you have a hammer in your hand, it is convenient to see every problem in terms of its being a nail. We have found the solution, now let’s make the problem fit the solution we have available. It’s a form of reverse engineering.

It is significant that psychoactive drugs were originally developed for other purposes. Drugs such as Thorazine, Miltown and Marsilid were developed in the 50s as ways to treat infections. But they were also seen to have mood-altering side-effects – though scientists had no idea why or how. So, as several writers have pointed out, “instead of developing a drug to fit an abnormality an abnormality was postulated to fit a drug”. Thus we are encouraged to think of our problems in terms of the lucrative solutions to problems we didn’t know we had. In this way, the pharmaceutical companies are responsible for the very conditions they propose to alleviate

Forget the fact that some people are miserable because they are struggling on zero-hours contracts, or have lost their partner or have been watching the news too much – if we translate misery into some sort of chemical imbalance then someone can make big money out of it. But unhappiness is often a perfectly proper response to the state of the world. If you have a shit job or a shit home life, being unhappy is hardly inappropriate. At best, many of the drugs we are popping only deal with the symptoms of all this, not the causes. At worst, they pathologise deviations for normalcy, thus helping to police the established values of consumer capitalism, and reinforcing the very unhappiness that they purport to cure.

Yes, there are some for whom happiness can be reclaimed by doing a bit more exercise or being more sociable. This sounds healthier than pills. But for those for whom these are not solutions, let’s not make it worse by insisting upon the compulsory happiness of the smiley face. For, like the drugs, this can be just another way of shutting people up.