Print Save to bookmarks
OFF LABEL - Official US Theatrical Trailer 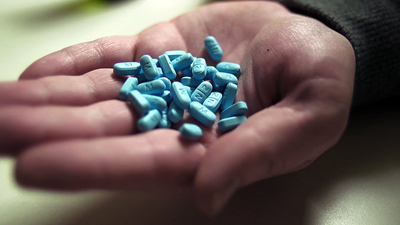 A scene from the documentary "Off Label," directed by Michael Palmieri and Donal Mosher.

“It's easy to say we've become a world on psychiatric medication— I mean that's indisputable. But what we're doing here is really sort of shady.”

‘Off Label,’ Directed by Michael Palmieri and Donal Mosher

The overcrowded gallery of prescription-drug veterans in the diffuse documentary “Off Label” includes at least one actual war veteran, but nearly all seem to suffer from some kind of post-traumatic stress disorder. The source of trauma, as posited by the documentarians Michael Palmieri and Donal Mosher, is pharmaceuticals, here a kind of unyielding behemoth perceivable by the long, indifferent shadow it casts on the afflicted.

The cross-section of adherents, skeptics and walking wounded can be, story by story, hair-raising. Some cases are familiar — the mother of a suicide, a bipolar woman muted by bottles upon bottles of pills — but we also hear from a hotel-dwelling old hand at clinical drug trials and a renegade medical anthropologist. These filmmakers like to turn the spotlight on cultural intersections: a punk concert in the hometown of the Mayo Clinic, its attendees well medicated; or the wedding of a pierced couple who met jumping trains, the man professing his hatred of money yet content to let his wife work.

The ex-soldier’s success with a veterans association, talking through problems rather than popping pills, is one of the bright spots in the film’s cluttered mix of those who need or riskily benefit from drugs. But the film’s stacked stories naggingly lack a cohesive train of thought beyond the often harmful pervasiveness of pharmaceuticals in American society.