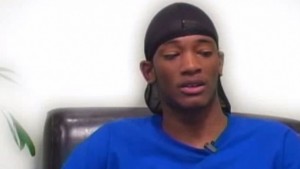 Now an adult and out of the foster care system, Tristen is speaking out against drugging children in foster care.

“Many child and human rights advocates are concerned about the dramatic number of children who are classified as 'special needs' after entering the foster care system. One reason doctors, psychiatrists and therapists may not be speaking out against the unnecessary drugging of these children is because those who prescribe the drugs often benefit financially, receiving big payouts from pharmaceutical companies.”

Hours after Texas Child Protective Services removed 5-year-old Tristen from the care of his mother and placed him in a foster home, Tristen’s foster parents took him to see a psychiatrist, citing concerns the young boy was depressed. That day, a psychiatrist prescribed Tristen three medications: one for anger, one for depression and one to help the 5-year-old relax.

Now an adult and out of the foster care system, Tristen says he recognizes he was depressed that day, but he says he never needed any medication — his feelings were only natural given the circumstances.

“They just took the thing that meant the most to me,” he said. “My family.”

Passed from foster home to foster home all over the state of Texas, Tristen says no one ever asked him how the pills made him feel, despite the fact that he would often spend time in his room crying because he felt his medicines were slowly tearing his chest apart.

Doctors also never tested Tristen to see whether the drugs were working or whether the combination of medications he was on was safe. And whenever he asked his case worker or foster parents if he could stop using the drugs, they threatened to call the police, take him to a psychiatric hospital or kick him out of the foster care system.

Unfortunately, stories like Tristen’s are all too common in the U.S.

Of the more than 400,000 children in the U.S. foster care system, it’s estimated that more than 50 percent are on some sort of psychiatric drug.

Money is part of the reason. Foster parents are paid more to take care of a child with mental health issues.

On average, a foster family earns about $17 a day for taking in a child who needs a basic level of care. But a child who is taking drugs such as antidepressants, antipsychotics, mood stabilizers, anxiety medications or anticonvulsant medications is worth around $1,000 a day.

And foster parents are not responsible for paying for the medicines, either, as they are covered by Social Security.

Many child and human rights advocates are concerned about the dramatic number of children who are classified as “special needs” after entering the foster care system. One reason doctors, psychiatrists and therapists may not be speaking out against the unnecessary drugging of these children is because those who prescribe the drugs often benefit financially, receiving big payouts from pharmaceutical companies.

But for foster care alumni like Tristen, placing children on several different medications is a common practice that needs to change, especially since the “medication only makes foster parents richer” at the expense of a child.

Dr. John Breeding is a psychologist who has long spoken out against prescribing children psychiatric drugs. He calls the increased reliance on pharmaceuticals to keep kids in line “institutionalized child abuse,” and says these medicines are as damaging as hitting a child on the head with a pipe.

He says children are being used as experimental guinea pigs and “as profit points for a corrupt, cynical, evil industry,” referring to big pharmaceutical companies.

National statistics are not available on the number of foster kids on psychiatric drugs because each state is responsible for overseeing its own foster care program. However, many speculate the numbers would be similar to those in Texas, since despite the fact that only 3 percent of the U.S. population has a medical condition that would benefit or require the use of antipsychotics, that type of drug is the top seller in the U.S.

Despite protests from medical experts like Breeding and testimony from foster care alumni, some medical professionals say there is nothing wrong with prescribing psychotropic drugs to children.

At a 2004 Texas committee hearing on psychotropic drugs and foster care children, psychiatrist Joe Burkett said he prescribed the medications to kids partly because “they are very sick” and “come from a bad gene pool.”

Breeding, who was in attendance at the hearing, said many like Burkett view mental illness as a genetic brain disease and therefore justify prescribing the pills.

Since activists such as Breeding began calling for change, some states, such as Texas, have begun to see legal changes regarding medicating children. Breeding told Mint Press News that while foster kids are the hardest-hit group of kids when it comes to use of psychiatric drugs, the number of kids on multiple drugs has declined.

Still, many foster care alumni remain concerned about kids “being drugged to the gills,” especially since most of the kids get off the medications once they age out of the system.

Aisha was in foster care for 15 years and spent a great deal of time in a home with her brother and 13 other children. Of the children in Aisha’s home, she says everyone was on medication when she arrived — except for her. But the first time she was taken to the doctor, she was prescribed 200 milligrams of Prozac to help her depression, as well as 200 milligrams of Seroquel so she could sleep at night.

“Foster parents should not be allowed to diagnose foster children,” Aisha said.

While Aisha was taking two medications, the other children in the foster home were taking at least five pills each. She said some kids took as many as 13 pills and were so accustomed to medication that they would swallow all of them at once.

“It’s absolutely tragic,” Breeding said, “We’re killing these kids. This is poison; this is not medical treatment. This is not an illness. These drugs are not medicine. They’re toxic poisons that disable and kill — physically many times, psychologically always.”

When 14-year-old Elnita was taken away from her family by Texas Child Protective Services and placed in a foster home, she was given a medication for depression that she says she did not need.

“I was a shy person,” Elnita explained, adding that she was struggling to get used to her new living environment, which was filled with several other young girls and caretakers she didn’t know. “I wasn’t ready for that.”

But like Tristen, she was forced to take the medication.

Elnita was prescribed 500 milligrams of an antidepressant and said every time she or one of the other girls in her foster care home cried or screamed out of frustration, they were put into an isolation room or given more drugs to calm down.

While in foster care, Elnita was on four different kinds of depression pills. Despite the fact that the medicines made her slow, caused her to struggle to focus at school and gave her terrible nightmares, her foster parents and her social worker denied her request to be taken off the high dosage.

While each state has its own version of Child Protective Services with its own rules and policies, the general requirements to become a foster parent are similar throughout the U.S. Foster parents are required to be at least 18 years old, be healthy physically and mentally, and live in an environment that protects and promotes the well-being of children. Single people and married couples are eligible to apply.

Elnita said the behavior of children in foster care is often “not normal because of what we’ve been through and what we’ve seen.” But all children in the foster care system are normal, she said — they just have “a little bit of extra problems.”

Elnita said that a problem with the current system is that foster parents “treat us like we’re only there for the money.”

Judge Janson A. Kauser is a retired municipal court judge, attorney, Guardian ad Litem for abused and neglected children, and former police officer who investigated suspected child abuse and neglect cases. He agrees with Elnita that the current foster system isn’t working and told Mint Press News that he doesn’t see much value in the current program.

While Kauser recognizes many Child Protective Services agents are well-intentioned individuals, he says based on his experience, they are doing loads of work without the necessary qualifications. Most of the agents “couldn’t spell investigation much less handle” one, he said.

Elnita is out of the foster care system now and has been off her depression medications for a year. She says she feels better and has found she can fit in with other people. She realized that what she needed all along was a person to talk to.

Ciara Jackson, a foster care alumni from Colorado, agrees. She said that when she first entered the system at 13, she was diagnosed with bipolar disorder. Until she was 17, Jackson fought with her foster parents and caseworker after realizing the drugs were making her slow mentally and physically. But she says the more she refused the drugs, “the more defiant social services labeled me and the angrier I became.”

When she emancipated herself at the age of 18, Jackson says she refused her medication and discovered that she was not bipolar, but had a mood disorder.

“If you had been in my surroundings and seen the things that I witnessed, your moods would change rapidly too,” she said.

Pleading with current and future foster parents, Tristen said foster parents need to recognize that the children in the system are already dealing with a life that has been halfway destroyed. He said the best thing a foster parent can do is not medicate a child, but ask him or her how she’s doing, how he’s feeling.