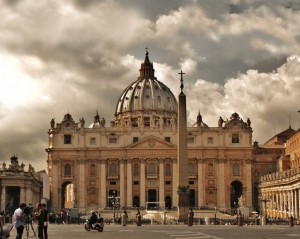 “The Catholic Church may be the only organization that can counter the corporate greed fueling the over- prescribing of harmful psychiatric drugs to children and young people.”

- Dr. Barry Duncan, clinical psychologist and director of the Heart and Soul of Change Project

While the White House has just announced its support of sweeping mental health programs that will lead to more children being targeted for mental health “treatment,” the Vatican is spearheading an investigational conference into the harmful effects of psychiatric drugs on children.

Upcoming Vatican Conference, “The Child as a Person and as a Patient: Therapeutic Approaches Compared”

The conference brings together professionals to discuss the harmful consequences of overusing prescription drugs for treating mental and emotional disorders in children, as well as how a similar trend is hurting pregnant mothers. According to the Catholic News agency, the conference hopes to prove that “psychosocial options” are better than “psychotropic care.” Experts taking part in the conference also hope to show that the risks heavily outweigh the benefits of the drugs.

Six years in the making, the conference will focus on two main drug groups, Selective Serotonin Reuptake Inhibitors, known as SSRIs or antidepressants, and antipsychotics. Psychiatric mind-altering drugs have increased dramatically with the increased diagnosing of such alleged mental disorders as Attention Deficit Hyperactivity Disorder, ADHD, Bipolar Disorder and a litany of alleged depressive disorders.

There is no argument when it comes to prescription psychiatric drug numbers. They’re ugly, and certainly justify the Vatican’s attempts to expose the dangers associated with over-diagnosing and over-medicating.

Child Drugging Statistics in the U.S.

Event organizer Dr. Barry Duncan, a clinical psychologist and director of the Heart and Soul of Change Project,  earlier laid out the problems regarding child drugging when he explained in a 2010 meeting of the Pontifical Council for Health Care Ministry that “the U.S. leads the world in the number of psychiatric prescriptions to young people and that the trend to resort to antipsychotics before or in lieu of social and behavioral therapy is on the rise in Europe.”

While the upcoming conference will address the issue on an international level, Duncan is intimately aware of the toll psychiatric drugs are taking on children in the U.S. receiving social benefits. “It is the poor children in the U.S.,” says Duncan, “particularly those in foster care or on Medicaid, are four times more likely to be prescribed antipsychotic drugs and six times more likely to be treated with a number of different psychotropic medications.”

The data regarding the drugging of children in the U.S. is alarming when one considers that about 1 in 70 preschoolers are taking antipsychotics, and 11 percent of the U.S. population over the age of twelve is taking antidepressants.

More distressing is that despite the Food and Drug Administration’s (FDA) warnings that the psychiatric drugs can cause suicide and suicidal ideation, 1 in 25 teens, aged 12 to 17, are being prescribed antidepressants, resulting in antidepressant use increasing at a rate of nearly 400 percent between 1988-1994 and 2005-2008.

The Vatican’s concern about the over-drugging of children is supported by the data that reveals 9 out of 10 children in the U.S. who see a child psychiatrist leave with a prescription for a mind-altering psychiatric drug. In fact, according to IMS Health, antidepressants were the third most commonly prescribed drug in the nation.

Between 1994 and 2003, the diagnosis of the alleged child bipolar disorder increased 4,000 percent—largely due to Dr. Joseph Biederman, a psychiatrist who also was funded by Janssen Pharmaceuticals, the maker of the antipsychotic drug Risperdal.

Duncan is all too aware of the harmful effects of psychiatric drugs and is equally aware that the damage is not limited to the U.S.

According to Duncan “prescriptions for psychiatric drugs have increased by 274 percent globally in over 50 countries since 2003.” Duncan’s hope is that with the “pharmaceutical industries spending millions and millions of dollars on misinformation, we want to counteract that with this conference.”

According to Kantar Media, the combined spending on print and digital media advertising for new antipsychotic drugs increased to $2.4 billion in 2010, up from $1.3 billion in 2007. Drug makers also spent nearly $300 million in 2009 on advertising for just two of the newer antidepressants, Cymbalta and Pristiq. Literally a drop in the proverbial bucket compared to the expected revenues.

What the Vatican Hopes to Accomplish

If any organization has the financial resources to fight the pharmaceutical giants, one could argue that the Vatican is the logical candidate. But it is an uphill battle when one considers that the psychiatric drug market is a multi tens of billions of dollars a year business.  But the financial resources poured into promoting the drugs is not the only issue up for discussion.

“The clinical trial evidence on psychiatric drugs,” says Duncan “is often skewed by conflicts of interest, particularly when trials are funded by the drug industry or when studies are conducted by people who are paid consultants of the company under review.”

Duncan is looking for an all-inclusive education program, calling on “religious orders, Catholic schools, hospitals, medical associations, media and parishes to become informed and help children and families discover alternatives to psychiatric medications, as well as help them have real input when discussing the risks and benefits of such medications.”

Understandably, there are an enormous number of hurdles to overcome, but Duncan believes the Church “may be the only power on earth that can counter the forces of corporate greed that have no moral or ethical conscience.”

With the substantial power of the Vatican behind the new push to take a serious in-depth look into the destructive nature of pharmaceutical psychiatric drugs, it is a promising starting point that should be applauded, and one that, at a minimum, has far-reaching implications for, at least, one billion of the Church’s faithful.