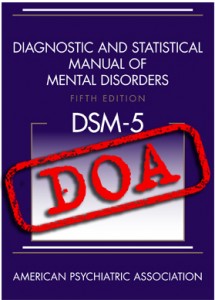 “The weakness of the manual is its lack of validity. Unlike our definitions of ischemic heart disease, lymphoma, or AIDS, the DSM diagnoses are based on a consensus about clusters of clinical symptoms, not any objective laboratory measure.”

It’s already old news that the National Institute of Mental Health, NIMH, the mother ship of mental health research in the world, has officially diagnosed psychiatry’s billing bible—the Diagnostic and Statistical Manual 5—as suffering from extreme lack of science, proclaiming it dead on arrival.  What isn’t known are the implications of NIMH’s announcement.

Yes, the NIMH director, Dr. Thomas Insel, is another in a long line of well-regarded experts who have publicly criticized the validity of the DSM, stating “patients with mental disorders deserve better.”

In itself, Insel’s announcement is big news, if not decades late, but it is the Director’s explanation for the abrupt withdrawal of support for the manual that finally reveals the great divide between psychiatric opinion and science, and raises questions that, so far, remain unanswered.

According to Insel, “The weakness of the manual is its lack of validity. Unlike our definitions of ischemic heart disease, lymphoma, or AIDS,” says Insel, “the DSM diagnoses are based on a consensus about clusters of clinical symptoms, not any objective laboratory measure.” In short, there is no objective, confirmable abnormality for any alleged psychiatric disorder.

While it is an encouraging first step to have the premier mental health research institute reject 60 years of psychiatric opinion, it does not address the coming fallout. For example, given that the NIMH has, for all intent and purposes, made the DSM irrelevant, how will that affect insurance payments for not only billing of DSM diagnoses, but also reimbursements for psychiatric drugs recommended as “treatment” for the diagnosis?

More importantly, since the world’s premier mental health research body has so blatantly admitted the uselessness of the DSM, when will the government, which spends hundreds-of-billions of dollars on mental health, end its funding of the mental illness programs that are based on the DSM, which Dr. Insel says “lack validity.”

Federal funding (taxpayer dollars) for mental health care is skyrocketing.  For example, in 2012, $140 billion was spent on mental health services in the U.S. and treatment of psychiatric disorders, derived from the DSM, costs 200 percent more than general medical care.

Furthermore, due to the diagnostic criteria of the DSM, in the last 20 years, the rates of Attention Deficit Hyperactivity Disorder (ADHD) have tripled, while “autistic disorder” and “childhood bipolar disorder” each increased by an astounding 40-fold. Will federal and state governments continue to reimburse for mental disorders that have been proclaimed to “lack validity?”

For that matter, one must wonder how pharmaceutical companies will handle the abrupt reversal? After all, psychiatric drugsare alleged to “treat” specific areas of the brain – to increase naturally occurring chemicals because of that oft-stated imbalance – and Dr. Insel has most demonstrably stated that the alleged disorders are not based in science.

Even Columbia University psychiatrist, Dr. Robert Spitzer, the Chairman of the DSM-III, has stated that “no biological markers have been identified” for any alleged psychiatric disorder.  So, if there are no “biological markers” and no validity to the diagnosis, does it not also raise serious questions about the use of pharmaceutical psychiatric drugs? 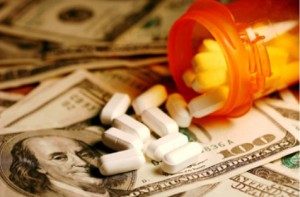 Given that psychiatric drug sales is a nearly hundred billion dollar a year business, one can only wonder what is being said around pharmaceutical board rooms at this moment. Perhaps something along the lines of Insel’s got some “splainin” to do.

However, while there is little chance of crocodile tears being spilled for the pharmaceutical companies possible revenue loss, it does leave one to question how governmental bodies can continue to reimburse for psychiatric drug treatments when its premier mental health agency has declared there is no evidence to support any biological efficacy. After all, if there is no biological abnormality, what is being “treated?”

Taking it to its extreme, one also might wonder if the U.S. Department of Justice might have a few questions for not only the psychiatric and pharmaceutical communities, but maybe even the Food and Drug Administration (FDA), which is responsible for approving the drugs that “treat” the alleged psychiatric disorders. At some point, opinion, guesses, assumptions and wishful thinking may have crossed the line of fraud.

Ultimately, though, the biggest question is how the people who have been diagnosed with these alleged psychiatric disorders, and “treated” with extremely dangerous mind-altering drugs, will respond to the news that there is no validity to the diagnosis.

Only time will tell what the answers are to these questions, but one thing is certain…the people most certainly “deserve better.”