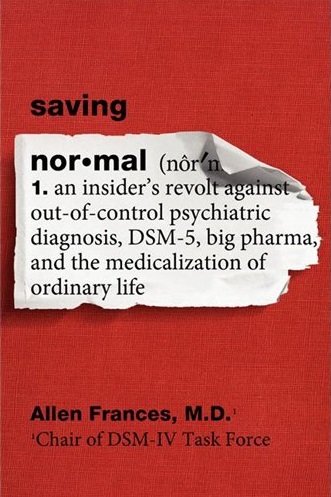 The latest edition of the psychiatry industry’s Diagnostic and Statistical Manual of Mental Disorders, Fifth Edition (DSM-V), which is set for publication in May 2013, is expected to contain the most sweeping reclassification of essentially all human conditions, feelings, and emotions as mental disorders, based on official manuscripts recently approved by the American Psychiatric Association (APA). And what this portends for the future of society and the medical treatment of normal human behaviors is chilling, that is if the fraudulent document is even taken seriously.

As reported by Barbara Kay over at the National Post, DSM-V casts aside all reason by typifying many common behaviors and emotional states as mental disorders, which of course will be used as an excuse to push more pharmaceutical drugs on the masses as “cures.” So-called “generalized anxiety disorder” (GAD), for instance, which used to categorize only anxieties without a specific cause, will soon be expanded to include common anxieties that stem from known turmoils such as financial instability, domestic problems, or heavy school workloads, for example.

Other normal human behaviors to be reclassified as mental disorders in DSM-V include things like child temper tantrums, or what DSM-V refers to as “Disruptive Mood Dysregulation Disorder,” and “Major Depressive Disorder,” the new made-up name for normal feelings of grief following the loss of a loved one. These and many other fantasy health conditions will all be included in DSM-V as mental conditions that require synthetic drug interventions in order to effectively treat, according to the industry.

“It seems that every DSM upgrade contains more and more ‘disorders’ that are open to question for their vagueness and open-endedness,” writes Kay, noting that psychiatrists really hold no special authority when it comes to pinpointing whether or not human conditions are truly mental disorders anyway. She also heavily quotes the work of Dr. Tana Dineen, a psychologist who witnessed first-hand the corruption of an industry that she says tends to “translate all of life into a myriad of abuses, addictions and traumas.”

Dr. Allen Frances, M.D., a psychiatrist himself, is actually urging the psychiatry profession to ignore DSM-V, as he says it is a “deeply flawed” disaster of a guide filled with “many changes that seem clearly unsafe and scientifically unsound.” Among these changes, he writes for Psychology Today, are all the new “fad diagnoses” that have no grounding in reality. Dr. Frances also calls out the very motives behind DSM-V’s publishing, which he says are questionable because of the “financial conflict[s] of interest” between those who worked on the manual and the pharmaceutical industry.

No matter how you look at it, DSM-V is a complete disaster scientifically speaking, as is the entity commonly known as the psychiatry profession. Dr. Dineen actually refers to the general practice of psychology in her book Manufacturing Victims: What the Psychology Industry is Doing to People, as “big business,” and claims “[i]t is simply no longer accurate to speak of it as a science and it is unscrupulously misleading to call it a profession.” And based on the outlandish additions to DSM-V, this appears to be a more than accurate assessment of this clearly exploitative industry.