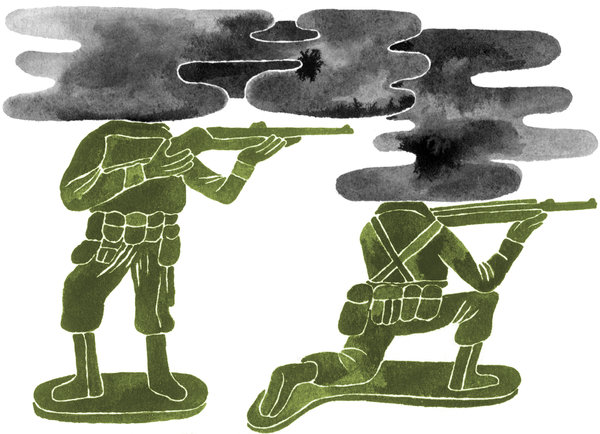 Last year, more active-duty soldiers committed suicide than died in battle. This fact has been reported so often that it has almost lost its jolting force. Almost.

Worse, according to data not reported on until now, the military evidently responded to stress that afflicts soldiers in Iraq and Afghanistan primarily by drugging soldiers on the front lines. Data that I have obtained directly from Tricare Management Activity, the division of the Department of Defense that manages health care services for the military, shows that there has been a giant, 682 percent increase in the number of psychoactive drugs — antipsychotics, sedatives, stimulants and mood stabilizers — prescribed to our troops between 2005 and 2011. That’s right. A nearly 700 percent increase — despite a steady reduction in combat troop levels since 2008.

The prescribing trends suggest that the military often uses medications in ways that are not approved by the Food and Drug Administration and do not comport with the usual psychiatric standards of practice.

The military tests prospective enlistees with an eye toward screening out those with serious psychiatric disorders. So you would expect that the use of these drugs in the military would be minimal — and certainly less than in the civilian population. But the opposite is true: prescriptions written for antipsychotic drugs for active-duty troops increased 1,083 percent from 2005 to 2011; the number of antipsychotic drug prescriptions in the civilian population increased just 22 percent from 2005 to 2011, according to IMS Health, an independent medical data company.

The data suggest that military doctors may prescribe psychoactive drugs for off-label use as sedatives, possibly so as to enable soldiers to function better in stressful combat situations. Capt. Michael Colston, a psychiatrist and program director for mental health policy in the Department of Defense, confirmed this possibility. In an e-mail to me, Dr. Colston acknowledged that antipsychotic drugs have been used to treat insomnia, anxiety and aggressive behavior.

As a psychiatrist and psychopharmacologist, I am familiar with off-label use of drugs. Off-label use is, in fact, standard medical practice. Sometimes we use drugs off-label after we’ve tried and failed to treat various problems with other medications. Often we prescribe off-label on the basis of “class extension,” which involves deciding that if one member of a drug family is F.D.A.-approved for a certain disorder, it’s safe to presume that other members of the same chemical family will work as well.

It is conceivable that the trauma of war might be so psychologically damaging, even to those men and women who enter the service without a mental disorder, that innovative, off-label use of psychoactive drugs might be in order.

The trouble is that we have no idea whether it’s effective — or safe — to use antipsychotic drugs on a continuing basis to treat war-related stress or to numb or sedate those affected by it.

Note that the military uses antipsychotic drugs to treat post-traumatic stress disorder, even though there is but weak evidence that these drugs effectively treat it. A recent randomized, controlled clinical trial involving nearly 300 veterans found that the antipsychotic risperidone was no better than a placebo as an adjunct in treating PTSD. Yet in 2007, PTSD was the most common off-label diagnosis for those, within the Department of Veterans Affairs, treated with psychoactive medications.

In treating soldiers who have PTSD symptoms with antipsychotic medications, the military is violating its own treatment guidelines, which clearly state that S.S.R.I. antidepressants are the preferred first line of treatment for PTSD. The military medical leadership has, in fact, expressed concern about prescribing trends. In February 2012, the assistant secretary of defense for health affairs, Dr. Jonathan Woodson, wrote in a memo to the military’s leadership that the “greatest concern is the suspicion of the over-prescription of antipsychotic medications for PTSD.”

Another reason to worry about liberal off-label use of antipsychotic medications is that they have long-term adverse health risks, including tardive dyskinesia, a potentially irreversible movement disorder.

There are other disturbing prescription trends in the military. The number of prescriptions written for potentially habit-forming anti-anxiety medications — like Valium and Klonopin — rose 713 percent between 2005 and 2011.