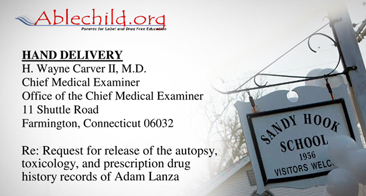 While state and federal lawmakers frantically push for massive mental health reform and sweeping gun control  laws, two Connecticut mothers recently took to the streets of Newtown, connecting with local residents and gathering signatures on a petition that asks a simple but essential question—did prescription psychiatric drugs play a role in the Sandy Hook Elementary shooting?

Seems like an easy and obvious question that, remarkably, has escaped the consideration of legislators who seem hell-bent on legislating increased mental health services without first having all the necessary information to make thoughtful, fact-based decisions.

To back up the need for full disclosure of Lanza’s records, the petition points out certain undisputed facts, such as, at least 31 school shootings and/or school-related acts of violence have been committed by those taking or withdrawing from psychiatric drugs resulting in 162 wounded and 72 killed. 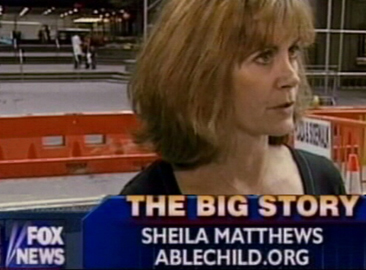 As the co-founder of the National Parent’s Rights organization, AbleChild, Sheila Matthews has made numerous national TV appearances on CNN, NBC and FOX National News.

The Petition further points out that 22 international drug regulatory warnings have been issued on psychiatric drugs causing violent behavior, including mania, psychosis and homicidal ideation.  Additionally, between 2004-2011, there were nearly 13,000 reports to the FDA’s MedWatch system of psychiatric drugs causing violent side effects, including homicide, mania and aggressive behavior.

Both Matthews and Sabato were gratified by the community’s support. “The vast majority of the people were really supportive of our efforts,” says Matthews. “They were really engaged,” continued Matthews, “and they wanted, and felt like, they had a right to know if Lanza was on drugs.”

Sabato mimics Matthews’ sentiments. “A lot of people,” says Sabato, “actually congratulated us for doing the petition.” “The people of Newtown,” explains Sabato, “know there is more to this story and, though they are tired of hearing Lanza’s name, they still want to know everything that may have played a part in his actions.” 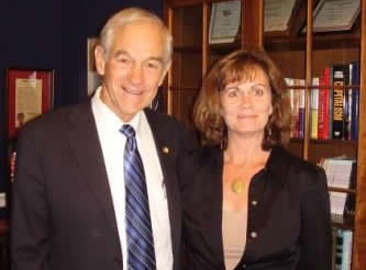 Sheila Matthews with former Congressman Ron Paul, who stated, “Too many children are suffering from being prescribed psychotropic drugs for nothing more than children’s typical rambunctious behavior.”

The mothers sent the petition to lawmakers and hand-delivered a letter to the State’s Medical Examiner, H. Wayne Carver II, M.D., requesting that Lanza’s autopsy/toxicology and medical/psychiatric history be publicly released.  The request literally cites two full pages of federal and state law supporting the request.

Despite the fact that, under Connecticut law, Carver is statutorily required to respond to the request, to date, the Medical Examiner has refused to even acknowledge receipt of the request, let alone release the requested information.

Certainly there are a number of questions that come to mind as to why the Coroner would refuse to release the information, but interfering with the on-going criminal investigation is not one of them.

In fact, Carver already has released selective information about Lanza’s autopsy, which begs the question – what is in the autopsy that obviously has put the Medical Examiner on the wrong side of Connecticut law and the wishes of Newtown residents?

In the end, it’s a simple question posed by those who lived through the nightmare. Was Adam Lanza on or withdrawing from psychiatric drugs at the time of the shooting?  The information is available. What’s the secret?