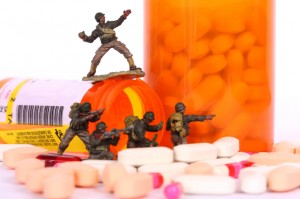 The monstrous psycho-pharmacological experiment is viewed by O’Meara as being largely responsible for the nation’s military troops taking their lives at record numbers while more and more seemingly healthy soldiers are dying from sudden unexplained deaths.

The National Institutes of Health writes about: “War and Military Mental Health.” Involvement in warfare can clearly have dramatic consequences for the mental health and well-being of military personnel. The success of screening by military psychiatrists has proven disappointing, with the effects of treatment near the front lines being unclear, and the results of treatment for chronic postwar syndromes mixed. The Citizens Commission on Human Rights (CCHR) has highlighted that the problem of poor of mental health care in the U.S. military is actually catastrophic in a report which has been published by Kelly Patricia O’Meara on Oct. 30, 2012: “Two Soldiers Prescribed 54 Drugs: Military Mental Health “Treatment” Becomes Frankenpharmacy.”

O’Meara writes that “the devastating adverse effects mind-altering psychiatric drugs may be having on the nation’s military troops are best summed up by Mary Shelley’s Dr. Frankenstein, writing “nothing is so painful to the human mind as a great and sudden change.” The psychiatric community, along with its pharmaceutical sidekicks, has turned to modern day chemical concoctions to alter the human mind in the same manners as the fictional character, Dr. Frankenstein, turned to experiments in the laboratory to create life with fantastically horrific results. This has resulted in what many see as “a growing number of equally hideous results culminating in senseless deaths, tormented lives and grief-stricken families.”

The monstrous psycho-pharmacological experiment is viewed by O’Meara as being largely responsible for the nation’s military troops taking their lives at record numbers while more and more seemingly healthy soldiers are dying from sudden unexplained deaths. Two cases are reviewed by O’Meara to help highlight the credibility of these assumptions. Marine corporal Andrew White and Senior Airman Anthony Mena have been chosen as just two examples of psycho-pharma’s disastrous chemical experimentation.

White is reported to have been a healthy 23-year-old, high spirited Marine returning from a nine-month tour in Iraq, who, like so many of his brothers in arms, was suffering from the seemingly normal stresses of war, which included insomnia, nightmares and restlessness. Corporal White turned to the military’s mental health system for help, and within a few short months he became unrecognizable to his family. Shirley White, his mother, has said: “He couldn’t function. He was a Zombie… it was like we were caring for an elderly person.” The dramatic decline in White’s condition began shortly after he was put on multi-drug treatment.

Eleven months after beginning his first cocktail of mind-altering drugs, White died in his sleep from what the medical examiner ruled an “accidental overdose of medication.” However, after reviewing White’s list of prescribed mind-altering drugs, many may seriously wonder if “accident” is a grotesquely distorted word for negligent or, perhaps, criminal? Ever since taking his first multi-drug cocktail until the date of his death, White had been prescribed no less than nineteen different drugs with many at ever-increasing dosages, including antidepressants, antipsychotics, anti-anxiety, pain killers and antibiotics. The prescribed drugs Methadone, Oxycodone, Paxil and Seroquel were found in his system at the time of his death. O’Meara has written: “Apparently the physicians and psychiatrists caring for White worked from some twisted, mad scientist laboratory mentality that if-this-cocktail-of-five-mind-altering-drugs-doesn’t-work-let’s-try-upping-the-dosage-and-adding-drugs-we-haven’t-tried.”

Twenty-three-year old Anthony (Tony) Mena had done two tours in Iraq as part of Kirtland Air Force Base’s 377th Security Forces Squadron. Like so many others returning from combat, Mena too suffered from insomnia, restlessness and nightmares. Mena received treatment from military, VA and civilian doctors. Early in his treatment “Mena already had become a victim of the military’s mental health mind-altering multi-drug approach to treatment.” The CCHR reports that between January of 2008 and his death in July 2009, “Mena had been prescribed no less than 35 prescription drugs, including numerous antidepressants, pain killers, tranquilizers and muscle relaxers.” There were nine different prescription medications found in his system in a toxicology report done at the time of his sudden death, including Xanax, Ambien, Dilaudid, Fentanyl, Paxil, Remeron, Skelaxin and Desyrel. In spite of the various combinations of mind-altering drugs which were prescribed to Mena, he did not get “better” but, instead, became “another psycho-pharma experiment gone deadly wrong.”

Kelly Patricia O’Meara concludes that perhaps it is time for the military to cut off their ties to the psycho-pharma community, reconsider the benefit of modern day pharmacological experimentation and remember the dire warning to Mary Shelley’s, Dr. Frankenstein: “You have created a monster, and it will destroy you.” Clearly, this report helps to highlight the need to search for and implement more natural therapies for the prevention and treatment of mental illness. Far too many good lives both inside and outside of the military have been wasted and lost early due to the horrors of the grossly unethical psycho-pharma community. The time to demand affirmative changes is now.