Note from CCHR:  The fact that psychiatrists are prescribing antipsychotics to kids diagnosed “ADHD” is a clear example of the depths to which psychiatry will sink,  putting normal kids at risk.  Take aside the fact that an ADHD diagnoses is arrived at simply by ticking off a checklist of childhood behaviors, such as fidgets, stares out window,  acts on the go, loses pencils or toys,  Antipsychotics are the most powerful in psychiatry’s arsenal of mind-altering drugs. Warnings have been issued on their ability to cause brain damage and International Drug Regulatory Agencies warn antipsychotics cause diabetes, convulsions, seizures,  cognitive impairment, motor impairment, paralysis, blood clots, stroke and sudden death and they’re being prescribed for kids who “fidget.”  All of this information on antipsychotic drugs are  documented on CCHR’s psychiatric drug search engine here.

The number of children and teens taking antipsychotic medications has skyrocketed in recent years, with psychiatrists prescribing the drugs in nearly one-in-three visits with youth, a new study found. 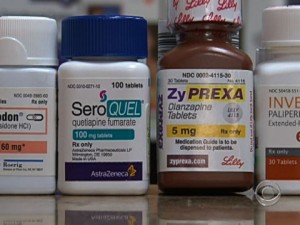 The drugs are not only being prescribed for schizophrenia and bipolar disorder, but also for the commonly diagnosed attention deficit hyperactivity disorder (ADHD). Many mental health experts say that the powerful medications come with serious potential side effects and that their effectiveness has not been proven in treating the disorders for which they’re increasingly prescribed.

“The growth in antipsychotic treatment of children — roughly eight-fold in 17 years — is especially impressive,” said study author Dr. Mark Olfson, a professor of clinical psychiatry at the College of Physicians and Surgeons of Columbia University.

“Practice has overstepped research,” he said. “These rapidly rising rates of antipsychotic treatment in young people should give physicians pause.”

For the new study, published online this week in the Archives of General Psychiatry, Olfson and colleagues categorized people into two groups: children for those up to 13 years old and teens for those aged 14-20. They looked at data from doctor’s office visits collected over several decades, and compared data from 1993 to 1998 with that from 2005-2009. The number of doctor’s visits in which an antipsychotic was prescribed jumped from 0.24 percent to 1.83 percent in children, and from 0.78 percent to 3.76 percent in teens.

“[That] is a pretty big leap — not huge, but substantial,” said Dr. Michael Houston, an associate clinical professor of psychiatry and pediatrics at the George Washington university medical center and a member of the American Academy of Child and Adolescent Psychiatry. “Whether or not it is bad news is hard to determine,” added Houston, who was not involved with the study.

Doctors primarily prescribed the drugs because of behavior disorders and ADHD, the study found, which is considered “off-label” use. The Food and Drug Administration has approved use of antipsychotics in youth primarily for treating schizophrenia, bipolar mania, Tourette’s syndrome and irritability stemming from autism — but the study found that only a small proportion of treatment was for one of those approved uses.

Get the facts about psychiatric disorders here

Search all psychiatric drug warnings, studies and side effects reported to the US FDA here