Video of a student restrained and shocked for hours at the Judge Rotenberg Center was played in court on Tuesday after a years-long battle by the center to keep it from the public eye.

The video, which shows former resident Andre McCollins screaming, writhing in pain, and begging for help, was played at the start of McCollins’ trial against the Canton-based Judge Rotenberg Center.

The Rotenberg Center convinced a judge eight years ago to seal the video, and the battle continued up until Tuesday morning when their attorneys asked Superior Court Judge Barbara Dortch-Okara to bar FOX Undercover’s camera from recording the video as it was played.

Dortch-Okara denied the center’s request, clearing the way to give the public the first look at how these controversial electric shocks are used. The video was taken by one of the center’s classroom cameras. 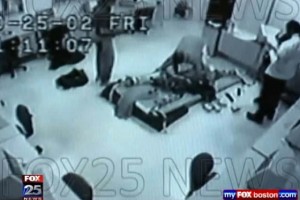 The teen was shocked 31 times in just one day

McCollins, then 18 years old, was shocked 31 times that day in 2002. Lawyers for the center and its clinicians say it was part of the treatment he needed to quell his aggressive behavior.

It was an emotional day for McCollins’ mother, Cheryl, who was in court watching as the beginning of her son’s ordeal was played.

Andre is shown seated at a desk inside a classroom as a staff member asks him several times to remove his coat. He stays still, apparently not responding or removing his coat, until he is given a shock.

He screams and falls to the floor, yelling as he tries to hide under his desk. He was eventually restrained face-down, a helmet on his head, without breaks for food, water or the bathroom.

She also testified what her son was like when she visited him three days later after the incident. She said she found him in a “catatonic” state.

“I couldn’t turn Andre’s head to the left or the right. He was just staring straight. I took my hands and went like this,” she said, waving them as if in front of his eyes. “He didn’t blink.”

McCollins did get Andre to Children’s Hospital that day, where he was diagnosed with acute stress response caused by the shocks. The jury also heard her testify about watching the video and hearing staff members laughing while her son was on the floor.

More video is expected to be played Wednesday as testimony continues.