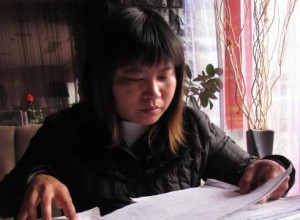 “I have no home or family, I have been detained and tortured by illegal medical treatment,” Wu says. “They have destroyed the latter half of my life. Until the people who illegally handled my case are punished, I won’t close my eyes, even in death.”

ZHENGZHOU, China – The electric acupuncture needles stung her scalp, and the drugs bloated her weight, gave her heart palpitations and brought on premature menopause.

But Wu Chunxia consented to the treatments at the psychiatric hospital because if she didn’t, she knew she would be strapped to her bed and left vulnerable to assaults from violent inmates.

“It was worse than hell in there,” says Wu, 37, of the Henan provincial psychiatric hospital in Xinxiang. “I feared I would be strangled at night by other patients.”

Wu was not at the hospital for reasons of mental health. She was committed there in 2008 by the Chinese government for 132 days as punishment for protesting about local injustice to higher authorities.

The Communist Party does not acknowledge its mental facilities are used to silence critics, but according to numerous human rights groups and Chinese dissidents, China’s Communist-led government has for decades incarcerated healthy people in mental wards to suppress dissent. In the past two years, wrongful confinement cases have sharply increased, says Liu Feiyue of Civil Rights and Livelihood Watch, a human-rights organization based in Suzhou.

The rise in confinements is greatest among petitioners — the ordinary people who complain about local problems, he says. Committing them to mental hospitals is a “quick, convenient and very effective” method for the government to silence criticism.

Now some Chinese officials are pushing back against the political confinements. Prodded by academics, activists and former patients, China’s National People’s Congress is discussing what would be the country’s first ever mental health law.

Minister of Health Chen Zhu told the standing committee of the Congress in October that the new law will curb the abuse of involuntary hospitalization and better protect the rights of the mentally ill. Chen blamed “procedural failings” for cases of forcible treatment that were challenged by victims and families.

Despite several shortcomings, the draft legislation represents both a legal and social milestone for the world’s most populous country, says Wang Yue, a psychiatry professor at Peking University.

“Only once a society develops to a certain level does it pay more attention to mental health and forced hospitalization,” says Wang, who alludes to wrongful confinements in mental wards in the U.S. in the early 1900s, though such cases were not attempts by the government to silence political opponents.

“In China, we have long had the principle of big government and small society, and only now are we moving toward judicial supervision and a society ruled by law,” he says. “We must solve the problem of treating those mental patients who need treatment and not hospitalizing people who don’t.”

The number of wrongful confinements has risen because the number of Chinese who demand justice for personal matters has grown, Liu Feiyue says. They are reviving an ancient Chinese system of seeking redress by taking a complaint directly to higher authorities. They are determined, often desperate, he says, and thus troublesome to the authorities who are well aware their careers can be ruined by disquiet.

Xu Wu, 43, a former security guard, had grown suicidal after four years of incarceration, including electric shock treatment, for petitioning authorities about a wage dispute with his employer. In April, after watching a film in which kung fu star Jet Li escapes from jail, Xu copied Li’s moves by loosening his cell bars over three nights and escaped from the mental hospital in the Yangtze River port Wuhan.

He fled by train to Guangzhou, 600 miles south, where a hospital test concluded he was sane. He was seized eight days later by plainclothes Wuhan police outside the Guangzhou television station where he had just described his plight on-air. Media coverage, including video of his re-capture, helped secure Xu’s release on June 10, the same day the initial draft law was released for public comment.

He has read it and is pessimistic about its effectiveness. “I hope the new law will help other patients, but it will be hard to implement, like all laws in China,” Xu says.

“The law will reduce the abuse of power and the confinement of healthy people,” says Huang Xuetao, director of the Equity & Justice Initiative, a non-profit based in Shenzhen, south China. She welcomes the revisions adopted in the latest October draft, including removal of the catch-all “risk of public disorder” reason for involuntary hospitalization, but urges further revision before the law is finalized sometime in 2012.

Last month, with the help of Equity & Justice, Xu Wu and four fellow victims of forced hospitalization appealed to the National People’s Congress for patients to be permitted to enlist outside representatives to help appeal their diagnosis and confinement.

In China, only the person or organization that applied for a patient’s forced commitment can apply for his or her release.

“The ideal would be for every involuntary hospitalization case to be examined and verified by judicial authorities, as happens in some U.S. states,” Huang says. “But in China at present, that’s just not realistic.”

Wu Chunxia won her release from the psychiatric hospital in Xinxiang by threatening suicide and persistently demanding her case be investigated, she says. Now she is battling for justice and compensation both through China’s courts, despite their lack of independence from the Communist Party, and the more traditional route of petitioning higher authorities, the very act that, while legal, got her detained in the first place.

She has had some success. Officials revoked the police decisions to punish her petitioning first by detaining her, then by committing her to a labor camp, a decision later changed to confinement in the mental hospital. The policeman who handled her case, Zhang Xiaodong, told USA TODAY he doesn’t know Wu. But earlier this month, in an interview with Southern Metropolitan News, Zhang blamed his treatment of Wu on orders from the local political-legal committee, a Communist Party group that guides judicial work. Committee secretary Li Zongxi declined to comment.

Rights activist Liu says officials commit troublemakers to mental hospitals because the process is secretive and, unlike the courts, requires no evidence of wrongdoing. He says the full extent of wrongful confinement in recent years far exceeds the 1,000 cases his group has compiled in a database since 2009.

For these reasons, Liu says the new law will remain “just a piece of paper” until China undertakes “systematic change, to a society that genuinely respects law and human rights.”

Even accepting the current draft over nothing may be a devil’s bargain, warns Nicholas Bequelin, a Hong Kong-based researcher for Human Rights Watch. “A bad law will entrench bad practices and would extend too much the power of public security officials to detain people on the basis of their political opinion or other irrelevant aspects,” he says.

China has failed to adopt the international norms for mental health law set out in the United Nations Convention on Rights of Persons with Disabilities, despite its ratification by Beijing, Bequelin says. The draft lacks provision for people to be assisted by lawyers and fails to prohibit the “political use of psychiatry,” he says.

Wu Chunxia is encouraged by the pending legislation. “It shows more attention paid to human rights in China,” she says. “I hope the law stops normal people suffering the persecution I had.”

Two years after Wu filed a suit against both the hospital and the neighborhood officials who committed her, a court in nearby Shenqiu County held its first hearing in October. Now she is petitioning the provincial court to speed the process and asking police to investigate the policeman Zhang Xiaodong.

“I have no home or family, I have been detained and tortured by illegal medical treatment,” Wu says. “They have destroyed the latter half of my life. Until the people who illegally handled my case are punished, I won’t close my eyes, even in death.”

Watch: G Edward Griffin on Psychiatry and Politics as a form of Government Control: