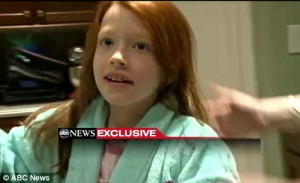 Little Brooke, 7, suffers the side effects of TEN anti-psychotic drugs... and she's one of millions of over-prescribed foster kids

But over the course of four months, a medical clinic being paid with state dollars prescribed her a cocktail of anti-psychotic drugs that her family doctor says could be dangerous even for an adult.

The drugs didn’t fix her temper tantrums and bad moods. Instead, they made her problems worse. And when she tried to go off of them, she became almost uncontrollable.

Brooke is just one of millions of foster children across the country who have been prescribed unprecedented levels of powerful mind-altering drugs in an often misguided attempt to control the emotional problems these kids experience after watching their families break apart.

The freckle-faced redhead counted 10 drugs that she was prescribed to control her temper tantrums and bad moods.

But they didn’t help, so doctors at the clinic in Florida continued increasing her doses.

When foster mom Lisa Ward objected to the heavy medication, she was told that if she didn’t follow the instructions of the state-sponsored doctors, Brooke could be taken away from her and placed with another foster family.

Finally Ms Ward paid to send Brooke to a private doctor. What he saw horrified him: ‘The first thing we’ve got to think about, “Is the medicine causing this?”‘ asked psychiatrist Dr Luis Quinones.

But now, after a painful process of weening herself off the drugs, Brooke is better. Ms Ward and her husband adopted the 7-year-old and she has a new solution her her problems.

‘To hug you,’ Brooke replied.

The problem has reached the ears of legislators in Washington, who heard testimony from some of foster children affected by this trend. 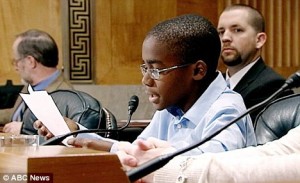 Ke'onte, 12, tells Congress that he was wrongly diagnosed with bipolar disorder and ADHD and given four different medications that left him in a 'stupor'

A 12-year-old boy bravely told how he was medicated into a near-stupor as he was passed between foster care homes.

The seventh grader, known only as Ke’onte, told Congress that being given the mind-altering drugs was ‘the worst thing anyone could do to foster kids’.

He revealed that he could barely eat while on the medication and was so exhausted ‘it felt like I would collapse wherever I was in the house’.

‘I think putting me on all these stupid meds was the stupidest thing I’ve ever experienced in foster care,’ he said.

Ke’onte’s plight came to light as a Government Accountability Office report was released that found the federal government had not done enough to oversee the treatment of foster children with powerful drugs. Ke’onte, who was adopted in 2009, said he had tantrums as a foster child and was inaccurately diagnosed as bipolar and having ADHD.

‘I’ve been in the mental hospital three times during foster care, and every time I had to get on more meds or new meds to add to the ones I was already taking,’ he said. 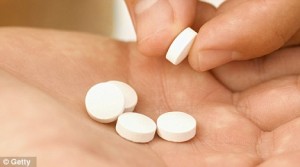 Medicated: The Government study found children in foster care were 13 times more likely to be on anti-pyschotics and anti-depressants than other children

He was on four different types of medication during his four years in six foster care and the drugs made him feel irritable, gave him stomach aches and affected his appetite, reports ABC.

‘I remember having a bowl of spaghetti and had three bites and then I was done,’ he said.

He has since been taken off the medication and given therapy, and is thriving.

He said: ‘In therapy, you talk about the deepest thing and it hurts, but you can deal with it better the next time.

‘I’m not only more focused in school… I’m not going to the office anymore for bad behavior and I’m happy.’