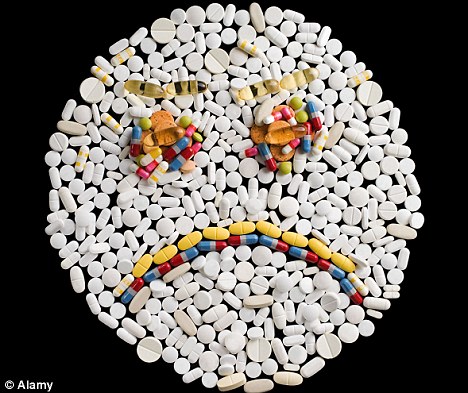 Back in 1966, the Rolling Stones recorded Mother’s Little Helper — a bitter satire on the barbiturates women had taken to popping just like sweeties.

‘Mother needs something today to calm her down.
And though she’s not really ill, there’s a little yellow pill.
She goes running for the shelter of a mother’s little helper.
And it helps her on her way, gets her through her busy day.’

It’s 45 years since those lyrics were written and the situation today is even worse.

A new study reveals one in three women has taken anti-depressants at some point in her life (compared to one in ten men) and nearly half of women using the drugs have been on them for at least five years.

But are all those women taking drugs for depression actually depressed? Those who genuinely suffer the crippling condition Churchill called the Black Dog would probably shake their heads.

That is not to diminish the real pain of those who feel permanently anxious, exhausted or gloomy – all common mental disorders.

But such people (men as well as women) may not need drugs. The trouble is that Platform 51’s research found 57 per cent of those prescribed anti-depressants were not offered any alternatives.

Many women write to my Saturday advice column in the Mail telling me life is just not delivering the happiness they want. Of course, they don’t put it that way.

Discontentment and boredom in marriage, the stress of juggling home and work, caring for children/sick relatives/elderly parents, feeling lonely and left out, nursing a broken heart, worrying about teenage children . . . and also suffering from the dread expressed by the Rolling Stones as ‘what a drag it is getting old’.

All these (often ill-defined) woes pour into letters I file under the single word ‘angst’.

That German word means fear or anxiety and is used to describe an intense feeling of apprehension, anxiety or inner turmoil. My point is that to feel that way — for any of the reasons above or others — does not mean you should necessarily describe yourself as depressed.

It could just mean you are experiencing the troughs that are part of the human condition. You do not need to be treated as ill and medicated.

Let me be personal. At the end of 1975, I was deeply unhappy after the stillbirth of my second son after a long and complicated labour. My doctor prescribed a tricyclic anti-depressant that made me stumble about like a zombie, even though I had to care for a two-year-old.

One day a man came to the door offering to clean the windows and, in my spaced-out state, I thought nothing of the fact he insisted on tackling the inside first.

I left him to it, was surprised when he made a quick exit — and then discovered he had taken the valuable antique ring my mother-in-law had given me as a wedding present.

Oddly enough, that little disaster acted as a wake-up call. I looked in the mirror and said: ‘You’re not depressed, you’re grieving.’

I can still vividly recall the moment of release when I tipped the contents of the brown bottle of pills into the loo and pulled the chain. 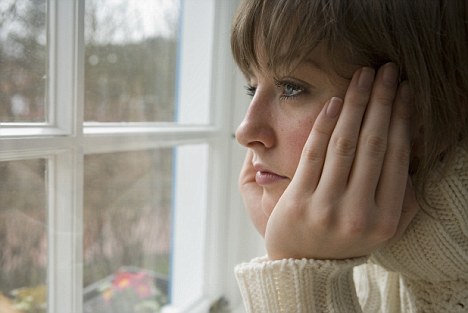 Have hope: Yes, we all get miserable - but it will pass (picture posed by model)

Twenty-two years later, I had another small crisis. My daughter was leaving home and my son (absorbed in his new relationship and living in London) was emotionally distant.

Their father seemed permanently away working, so not only was I suffering empty-nest syndrome, I was terribly lonely, too.

So off I went to the GP, said I felt down, explained why — and was immediately prescribed Lustral, one of a group of anti-depressants that includes Prozac.

A couple of weeks later, I felt fine. Was that due to the Lustral or because I was working through my feelings? Were things just getting better for me because (unless you are clinically depressed) that is the natural order of things?

Whatever the answer, I have no doubt drugs were not the answer to my problems and should never have been prescribed.

Mind you, despite the lessons I learned, when my marriage broke down in 2003, I took amitriptyline (another anti-depressant) for a short time to help me sleep.

‘We spend billions trying to get happy, but if we stopped expecting it as a right, we might be pleasantly surprised by an unexpected acceptance of how things are’

Unlike the previous occasions, it felt like the right decisions. Nevertheless, I would say to a woman in a similar situation: ‘Expect to be miserable, understand that it will pass — and don’t run the risk of getting hooked on a drug.’

What I really needed in each of those three situations (all of which will be recognised by many women) was someone qualified to talk me through it all and restore my self-esteem and hope.

Yes, you will worry about your children, be hurt when they turn into dreadful teenagers, feel sad and old when they leave home, and then worry about their love lives, their families . . . and so on.

It’s all a part of motherhood — the downside to the joy.

Children aside, life can seem tough and overwhelming at times for all women. You get so tired, work is demanding, friends let you down, there are so many things to worry about — and the wrinkles on your face will do nothing to cheer you.

When the menopause arrives, you feel grim. Next up, you start dreading the old age that is snapping at your heels.

But these are the normal stages of life that you can arm yourself against by being aware and prepared. It helps to realise that your worries, fears and longings are universal.

Sometimes we all need extra help from outside, which is why I would like to see qualified therapists in every NHS surgery to offer an alternative to the happy pills that may seem to relieve a problem, but do nothing to tackle what caused it in the first place.

The cost would fall far short of our current spending on unhappiness. After all, the huge drug companies are all too pleased we have commercialised depression, medicalised sadness and turned normal melancholy into an illness.

We spend billions trying to get happy, but if we stopped expecting it as a right, we might be pleasantly surprised by an unexpected acceptance of how things are.