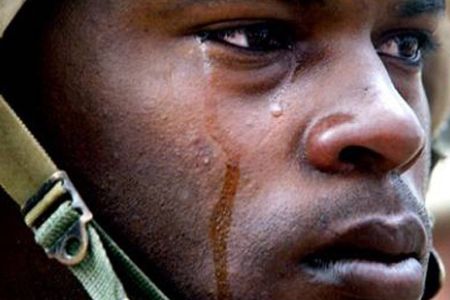 Prior to the Iraq war, American soldiers in combat zones did not take psychiatric drugs - by 2007, more than 20,000 troops were taking antidepressants & sleeping pills

“If mentally incapacitated troops are being drugged with dangerous, mind-altering drugs and deployed to battle against their will, how can we say that we have a volunteer army?” asked Alliance for Human Research Protection, the national network dedicated to advancing responsible and ethical medical research practices.

This is just one of the many criticisms being levied against the U.S. military in light of its liberal use of prescription medication, which is now being linked to rising suicide rates among soldiers.

A study released by the Army in June 2009 indicated that nearly as many American troops at home and abroad committed suicide in the first six months of 2006 as the number who had been killed in combat in Afghanistan during the same time period (http://www.npr.org/templates/story/…).

An average of 18 American veterans commit suicide every day (http://abcnews.go.com/Health/MindMo…). Now, the increasingly high number of deaths among both veterans and active duty soldiers–including suicides, accidental overdose, and lethal drug interactions–have now been linked to the exponential increase in the prescribing of drugs for post traumatic stress disorder, depression and other psychological illnesses.(http://www.ahrp.org/cms/content/vie…)

Prior to the  Iraq war, American soldiers in combat zones did not take psychiatric medications, according to PBS Frontline documentary The Wounded Platoon, which aired in May 2010. (http://www.pbs.org/wgbh/pages/front…) But by the time of the 2007 surge more than 20,000 of our deployed troops were taking antidepressants and sleeping pills.

These drugs allowed soldiers with post-traumatic stress disorder to remain in combat when they otherwise could not.

“What I use medications for is to treat very specific side effects,” said Army psychiatrist Col. George Brandt. “I don’t want somebody in a helpless mode in a combat environment. I want to make sure I don’t have someone with suicidal thoughts where everyone is armed.”

Well over 300,000 troops have returned from Iraq or Afghanistan with P.T.S.D., depression, traumatic brain injury or some combination of those, according to The New York Times (http://www.nytimes.com/2011/02/13/u…). Following the lead of civilian medicine, the military has relied heavily on medications to treat those problems, resulting in more widespread use of drugs in the military than in any previous war.

Frontline’s The Wounded Platoon looked at the problem of PTSD, depression and prescription medication in the military from the perspective of one platoon from Fort Carson, CO. 18 soldiers from Fort Carson have been charged with or convicted of murder, manslaughter or attempted murder committed in the United States, since the beginning of the “War on Terror,” and 36 have committed suicide.

Jose Barco, who was once known as the hero who saved his fellow soldiers during a suicide-bombing, is now serving a 52-year prison sentence for attempted murder. Barco suffered traumatic brain injury as a result of his heroics and was also diagnosed with PTSD for which he was prescribed nine different medications.

“We have someone who’s been emotionally traumatized, and they’ve got PTSD,” said retired military psychiatrist Stephen Xenakis. “They’re anxious, and they’re depressed, and they’ve got TBI, which means that they’ve got problems in decision making. They can’t think as clearly. They are really vulnerable to just overreacting.”

The rate of PTSD diagnosis at Fort Carson rose 4,000 percent between 2002 and 2010, and the increase in medications being prescribed for both veterans and those in combat rose to meet the demand.

Kenny Eastridge, another platoon member that Frontline spoke with who is in jail for murder and other crimes, was prescribed a cocktail of medications while in combat.

“I was having a total mental breakdown. Every day we were getting in battles and never having a break. It seemed like, it was just crazy,” he said. “They put me on all kinds of meds, and I was still going out on missions. They had me on Ambien, Remeron, Lexapro, Celexa, all kind of different stuff.”

Eastridge was sent to a remote combat outpost for weeks at a time with no medical supervision or mental health provision, despite the recommendation that patients on this medication should be monitored. Frontline footage showed Eastridge’s unstable behavior, which included wandering into Iraqi homes, lying in the people’s beds, and trying to hug local people.