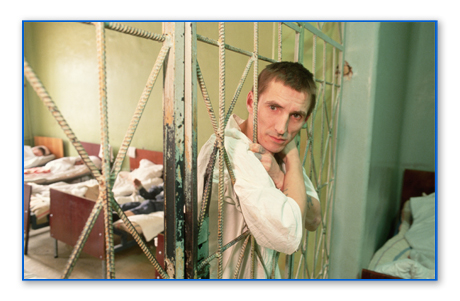 We keep hearing about hordes of dangerous lunatics wandering our streets just waiting to do unmentionable things to us. But fear not! The mental health police are there to protect you from all those crazed psychopaths! Reality, as usual, has quite a different story to tell. According to the latest report by the Information Centre for Health and Social Care (NHS, UK, October 2010) there were 30,774 formal admissions to mental hospitals (i.e. being locked up in psychiatric prisons) across England in 2009/10 which represent an increase of 7.3 per cent from 2008/09. Only 7% of these formal admissions occurred via the criminal justice system, i.e. court and prison disposals, with people having already spent their time in prisons or at least a part of their sentence, and spending a considerable longer time in “mental hospitals” than they would otherwise spend in prison for their crimes. This of course means that the vast majority of people incarcerated in mental hospitals have not been charged with committing any crimes.

It seems to me that we are dealing with a moral panic here rather than an actual threat to society posed by the so called “mentally ill”. But what exactly are moral panics? One can conceive of them as controversies that involve arguments and social tensions between different groups of people that appear to threaten the social order. Stanley Cohen, author of “Folk Devils and Moral Panics” (1972), stated that a moral panic occurs when “a condition, episode, person or group of persons emerges to become defined as a threat to societal values and interests.” Those who start the panic when they fear a threat to prevailing social or cultural values are often referred to as “moral entrepreneurs” (e.g. mental health activists) while people who supposedly threaten the social order are commonly called “folk devils” (e.g. people defined as “mentally ill”). A folk devil is a person or group of people who are portrayed as outsiders and deviant (e.g. because they transgress some social norms and conventions such as having different beliefs and values, taking illegal substances, being unemployed, poor, homeless, etc.), and who are blamed for crimes or other sorts of social problems such as the demise of morality and tradition, poverty and disease resulting in pervasive campaigns of hostility through gossip and the spreading of myths (e.g. “mental illness” exists and is caused by an imbalance of chemicals in the brain”, “mental patients are dangerous”, etc.).

The media have long operated as agents of moral indignation and often get in on the act and profit from a seemingly endless supply of horror stories. In relation to this Cohen (1972) coined the term “deviancy amplification spiral”, which is a media hype phenomenon defined as an increasing cycle of reporting on “undesirable” behaviours or events. The spiral usually starts with some “deviant” act that is either criminal (e.g. murder; rape) or considered by mainstream society to be morally repugnant (e.g. suicide; self-harm). Reported cases of such “deviance” are often presented as just “the tip of the iceberg” together with the assertion that the actual number of cases is most definitely significantly larger than the ones we know about. This then results in minor issues beginning to look more serious and rare events beginning to appear more common. The increase in public concern about welfare, safety and security then typically leads to state interventions such as politicians passing new laws to deal with the perceived threat (e.g. Mental Health Act 1983) and various law enforcement systems (e.g. psychiatrists, social workers) to focus more resources on dealing with the specific deviancy than it warrants (e.g. forced admissions and detentions of people who are defined as “mentally ill”, removal of children from their parents).

I would like to conclude by stating that it is a very difficult task to challenge the misinformation (e.g. that there is a thing called “mental illness”, or that people who are defined as “mentally ill” are dangerous) which is being spread by the mental health movement. This is predominantly so because there is no money to be made from the alternative (i.e. there is no “mental illness” ergo there is nothing to be treated) and because the people concerned (i.e. “mental patients”) as well as supporters of alternative viewpoints are far less powerful than the international multi-billion dollar per year pharmaceutical companies and affiliated mental health services. It is what Adolph Hitler would have described as a “Big Lie”, a lie that appears to be too big to be called out. Too much money and power seems to be at stake. Furthermore, the mental health ideology offers very simple and convenient explanations and solutions to problems in society that are now deeply assumed to be caused by a bunch of “lunatics” who are believed to suffer from serious mental health problems for which they supposedly require psychiatric treatment. Scary sounding names have been invented (e.g. schizophrenia, manic depression, antisocial personality disorder) by mental health activists to trick people into believing that there is something seriously wrong with some people and that it would be better to have them locked up, drugged, and shocked. As noted above, the prolonged imprisonment of “mental patients” in “mental hospitals” does not really seem to have anything to with any real crimes but actually more with how one thinks and feels about oneself, others and the world in general. One could describe these kinds of behaviour as thought crimes or offences against a mental health ideology for which one has to pay with one’s health and liberty.

Dominik Ritter is a psychologist, writer, lecturer, social critic, and founder of the Blue Panthers Party, a critical psychiatry group.