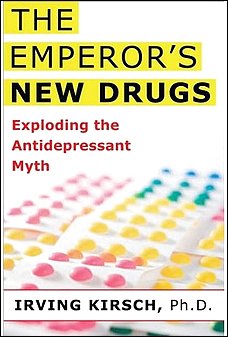 In “The Emperor’s New Drugs: Exploding the Antidepressant Myth,” just released in paperback, psychology professor Irving Kirsch argues that antidepressant drugs are not effective and that the idea of depression as a chemical imbalance in the brain is pure myth. Kirsch provides what he says is evidence that antidepressants are no better than placebo pills. So should millions of Americans flush their pills down the toilet? It’s a dangerous thought, but, if Kirsch is right, so is the idea of people needlessly taking expensive medications with potentially serious side effects. Kirsch’s “black-box warning” that patients should not discontinue taking antidepressants without first consulting with a doctor is, unfortunately, tucked away on Page 152.

Irving Kirsch is Professor of Psychology at the University of Hull in the UK and author of “The Emperor’s New Drugs: Exploding the Antidepressant Myth” http://www.washingtonpost.com/wp-dyn/content/article/2011/03/07/AR2011030704079.html