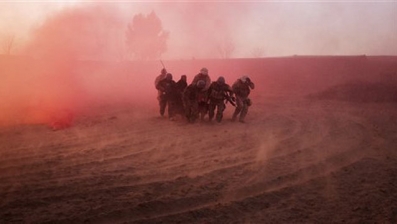 As U.S. military leaders gathered Wednesday to give their latest update on the rash of Army suicides, new questions are being raised about a U.S. Central Command policy that allows troops to go to Iraq and Afghanistan with up to a six-month supply of psychotropic drugs.

Prescription drugs have already been linked to some military suicides, and a top Army official warned last year about the danger of soldiers abusing that medication. Psychiatrists are now coming down hard on the military for continuing to sanction certain psychotropic drugs for combat troops, saying the risk from side effects is too great.

“There’s no way on earth that these boys and girls are getting monitored on the field,” said Dr. Peter Breggin, a New York-based psychiatrist who has extensively studied the side effects of psychiatric drugs. “The drugs simply shouldn’t be given to soldiers.”

Anxiety, violent behavior and “impulsivity” are all side effects of some of these medications, he said, the latter symptom being particularly dangerous in a war zone. Breggin said that if patients were given these medications in the civilian world and not monitored, it would amount to “malpractice.”

But Nextgov.com reported that Army leaders and doctors are increasingly concerned that the policy continues to allow combat troops to use everything from antidepressants to antipsychotics to hypnotics, medications they say could impair a soldier’s judgment. The swath of active-duty troops on these kinds of medications, according to a June 2010 Defense Department report, was about 20 percent.

The article highlighted one particular drug — the antipsychotic Seroquel — which the Army has sanctioned as a sleep aid, even though it can’t be used to treat troops for the mental disorders it was originally designed to address. A May 2010 military report recommended 25-50 milligram doses of the drug for “sleep disorders” including nightmares. It happens to be the same drug that two Marines back from Iraq were taking before they died in their sleep.

Military officials have pledged to rein in the use of prescription drugs. An Army Suicide Prevention Task Force report last year warned about the dangers posed by prolonged and open-ended use of these prescription medications. Following that, Army Vice Chief of Staff Gen. Peter Chiarelli suggested the duration of prescriptions be limited or at least reviewed periodically to avoid abuse.

He reiterated that concern Wednesday during a press conference on Army suicides. He said the Army is working to educate soldiers and members of the public “about the overuse and abuse of prescription drugs.”

Chiarelli credited military intervention with helping to reduce the number of suicides among the Army’s active-duty soldiers in 2010. That number dropped from 162 to 156 last year. He said, though, that suicides among those not on active duty went up significantly. Officials attributed the suicides to a combination of factors, not necessarily stemming from the stress of deploying. In a July report, the military said prescription drugs were involved in one-third of all active-duty suicides.

“It’s the relationship issues. It may be an individual who comes back and relies on alcohol to a level that he had not or she had not relied on it before. And maybe the person who has — has a rough time handling the prescription drugs that in some instances are all we know to prescribe for some of these things,” Chiarelli said Wednesday. He said the military is doing its “best” to “lower the incidence of prescribing a lot of drugs.”

The U.S. Army Medical Department and U.S. Central Command could not be reached for comment. Central Command told Nextgov.com that the reason the military allows up to a six-month supply of certain medications is to make sure troops have an “adequate supply.” Troops are deploying to regions where well-stocked pharmacies may be in short supply.

But Breggin said that when these troops are being prescribed psychotropic drugs, they should either have to deploy without them or stay home. He said the practice only started during the Iraq war and could still be stopped, adding that the suicides are clearly linked.

“It’s that new, so it isn’t necessary,” he said. Breggin testified last year before the House Veterans Affairs Committee about the risks associated with the use of antidepressants in the military. His latest book is “Medication Madness: The Role of Psychiatric Drugs in Cases of Violence, Suicide and Crime.”