Philip Robinson was 25 when he went to his GP with mild depression. The pills he was prescribed changed his life, turning him into a ‘zombie-like’ addict — just one of the 1.5 ­million Britons whose lives have been ruined by prescription drugs. Here, with extraordinary candour, he reveals how he battled to get his life back.

The problem began when I got married. ­Uncertain about the commitment I had just made and torn between wanting to leave my wife and not wanting to hurt her, I started to drink.

I wasn’t desperately depressed, nor was I drinking myself to oblivion. In fact, compared with my fellow journalists on the lads’ magazine Loaded, where I worked at the time, my drinking wasn’t a problem; I was just going through a low point.

It was 1998. I was 25 years old, and had been married for just a year when I went for the doctor’s appointment that would drive me to the edge of insanity and rob me of the next ten years of my life. 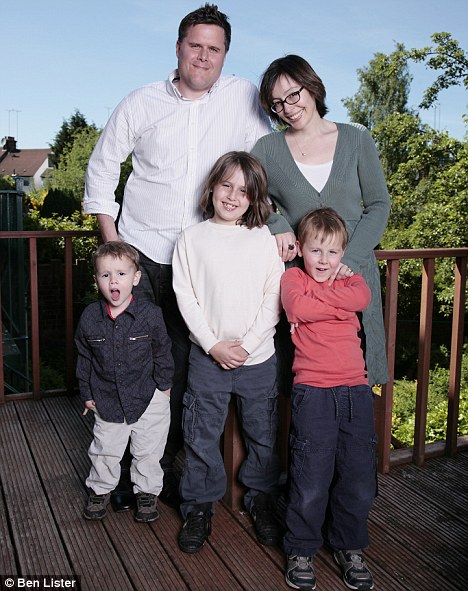 Back from the brink: Philip with wife Anna and their children. He became hooked on tranquillisers prescribed to beat mild depression

I was told, in the nicest ­possible way, that I was a depressed ­alcoholic. I was so shocked I gave up drinking immediately. I have not touched a drop since.

Then the doctor prescribed 90 Valium pills and a bottle of beta blockers to help with stress, and recommended I visit a psychiatrist in Harley Street.

I can still remember looking at the bottle in disbelief. I’d seen people thrown out of nightclubs for possessing two of these pills. The doctor had just given me 90!

What I didn’t realise at the time was that antidepressants and tranquillisers create long-term users. Thanks to the pills that my doctor had just handed over like Smarties, I was already on the road to what is known as ‘involuntary tranquilliser addiction’.

Put simply, this is where people seeking short-term help for ­anxiety end up hooked on ­powerful mood-altering drugs, sometimes for life. I had just been turned into a middle-class, NHS-­sponsored junkie, one of the 1.5 million Britons addicted to prescribed medication.

It comes at a price for the NHS, too: the health service spends £3 billion a year on tranquillisers and antidepressants alone.

Even back then I was shocked to be given so many drugs by the NHS. I remember one colleague noting the number of pills I was packing away in the course of day and telling me to take half. But, as far as I was ­concerned, I’d obtained these drugs from the doctor, and ­doctor knows best.

In Harley Street I was given my first supply of anti-­depressants and told that I was simply ­suffering from anxiety and depression.

After a few months I was no better. In fact, I was miserable, and seemed to be experiencing new nervous symptoms. In hindsight I was probably suffering side-effects from the drugs.

‘My wife became accustomed to my ever-changing personality, which altered according to whichever pills were being tried out on me by my ­psychiatrist’

Over the next few years, Anna, my wife, became accustomed to my ever-changing personality, which altered according to whichever pills and dosages were being tried out on me by my ­psychiatrist in Harley Street.

Despite the side-effects, Anna and I both trusted the doctors and I tested a host of antidepressants and mood-altering pills, trying to find the right combination that would cure my depression and give me back my life.

I remember these pills mostly for their side-effects. In one instance, I was offered a choice of two pills: one would make me fat, the other would give me a sexual dysfunction. I chose the weight gain.

Another course of pills made me vomit violently if I took them on an empty stomach.

Feeling increasingly depressed, dislocated, and paranoid, I was starting to lose sight of who I was. I began to display the symptoms of someone who was genuinely mentally ill and I took to ­sleeping all day, unable to get out of bed.

I left full-time work to recover at home and retreated from all but two or three of my friends. Anna loyally stood by me, even though I was growing more angry, depressed and unstable.

I had also become hooked on Valium. If I ran out of pills and the doctors’ surgery was closed, I would go to the hospital for an emergency prescription or face cold turkey.

Unlike illegal drugs, pres­cription drugs are incredibly convenient. You can unscrew the lid while walking for the bus, take a couple of neatly pressed, official-looking pills — medicine — and slip into a metaphorical side room. Tranquilliser users watch life though a chink in a pharmaceutical ­curtain, unable to participate in their own existence. 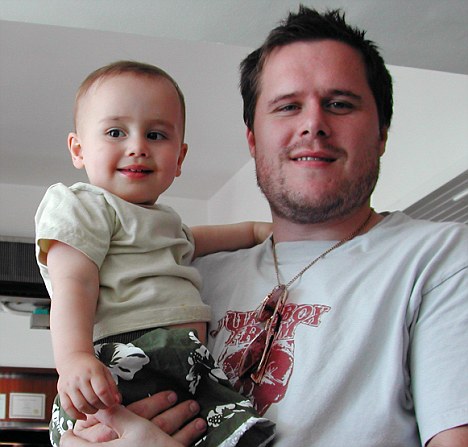 Philip in the grip of addiction when son Oscar was aged one: He struggled to cope with the pressures of marriage and fatherhood but his prescribed medication was more curse than cure

Five years after my first ­prescription, it seemed there wasn’t an antidepressant in the world that worked on my brain, yet my Harley Street doctor seemed determined that there was a pharmaceutical answer to my problem.

I was depressed, but Anna and I did have some moments of ­happiness and normality. We had moved into a new house and Anna was pregnant with our first child. I felt that this was my side of the arrangement, my duty, and that I owed her a child.

I loved her, but I was pretending to be a normal dutiful caring husband when, in reality, I was little more than a waxwork.

My state worsened when I was put on a powerful (and expensive) anti-epileptic drug called Depakote. Depakote is so toxic that it requires a blood test to be taken first.

I am not epileptic, but the pill is commonly given to severely ill ­people who are bipolar. As far as I knew, I had not been diagnosed with either illness.

‘I’d gone to my doctor initially to seek help because I was a young man, overwhelmed by the responsibility of marriage. At what point did I acquire severe mental health issues?’

I got my blood tests done and took Depakote alongside Effexor (an antidepressant), Valium (a tranquilliser) and Zopiclone (a sleeping pill). All I required was a pair of baggy trousers and green face paint and I could have ­doubled up as a zombie.

I found myself unable to laugh, or smile, or cry. I was taking more and more Valium to cope with mood swings related to ­taking ­Valium. I was by now taking double or triple my original ­prescribed dose.

An additional problem was that heavy doses of tranquillisers slow your breathing and suppress your gag reflex.

One night, after approximately 70mgs and some sleeping pills, I woke up aware that I was about to swallow my tongue, which had lolled back into my throat, almost creating an airtight seal. Fortunately, I had enough air in my lungs to cough it out. I remember not feeling concerned at the time.

As the Depakote established itself in my brain, I became cold and detached. I had ‘decided’ to live nocturnally, as this was optimum for my writing. I wanted peace and quiet. I avoided my young family, content with silence and the sound of blood pulsing in my ears.

After a few months of this weird, living death I was incapable of understanding or empathising with other peoples’ emotions. None of it seemed relevant.

The tipping point came when I visited my GP to speak about my continuing prescriptions. She clicked through my records on her screen and casually noted that I should continue my medication because I was listed as being on my local council’s Severe Mental Health Register.

Severe Mental Health Register? I left the appointment consumed by a sense of tragedy.

I’d gone to my doctor initially to seek help because I was a young man, overwhelmed and confused by the responsibility of marriage. At what point did I acquire severe mental health issues?

When did I become a threat to myself and others? I’m a threat to an open packet of chocolate biscuits, but not much else. I had found rock bottom.

Deep down, I knew that I couldn’t be bipolar and I had not been diagnosed as such. I was a happy child from a lovely family. My upbringing was so great that when I described it to psychologists, they seemed to be convinced I was making it up to conceal my inner torment.

I realised the only way to find out who I really was would be to get my brain chemistry back to how it was when I could last remember feeling normal. Back to before I ever saw a doctor or even had a drink.

I needed to be a kid again. I went back to see the doctor a ­couple of weeks later and told her that I had made the decision to come off the pills.

She wasn’t so sure and warned that my mental health might well collapse if I stopped taking the drugs and that there was a risk of hospitalisation. I wasn’t offered any help or advice.

Despite this prophecy of doom hanging over me, I found dropping the ­bipolar pills to be a slow, but relatively easy process. About a month after I stopped taking them, the world seemed brighter and I started to write again and feel alive.

I filled up notepads with ideas, and Anna noticed that I was more engaged with life, she could see my old self coming back.

A couple of months later, only ­Valium remained. I had now been on these mood-altering tranquillisers for ten years and lowering the dose was an agonising battle. Each milligram I took out of my bloodstream was paid for by huge ebbs and flows in my sanity levels.

Over the next two years, I threw myself into bout after bout of ­Valium withdrawal, lowering the dose each time and enduring what felt like a three month-long Mad Hatter’s tea party in my head.

Read the rest of this article here: http://www.dailymail.co.uk/health/article-1319716/I-lost-years-life-middle-class-NHS-sponsored-drug-addict-.html?ito=feeds-newsxml