Note from CCHR: This is just one example of rational, workable and non-harmful programs that help kids and which do not require prescribing them dangerous and potentially lethal drugs— due to the fact psychiatrists have determined that childhood itself is a mental “illness.”   For more information on non-harmful, non-drug solutions for children, visit our alternatives page https://www.cchrint.org/alternatives/ 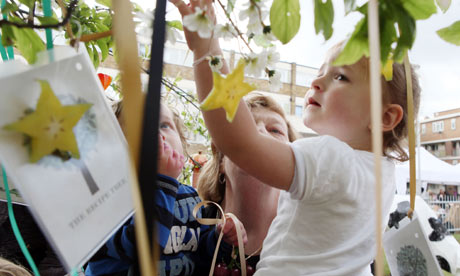 Schemes are growing up around the UK that seek to reconnect inner city children with nature by encouraging them to appreciate the bugs and birds on their doorstep.

“We want to let people know that they can just go outside their front door to see wildlife,” says Isabel MacLennan, development officer of Nottinghamshire Wildlife trust.

Next month will see the official launch of Wildlife in the City, a collaboration between Nottingham city council and Nottinghamshire Wildlife Trust, that will focus on 10 groups within the city failing to make use of their local green spaces and with a poor understanding of the benefits of doing so.

One of the key focuses of Wildlife in the City is the attitudes of children. In outreach work done by the trust earlier this year in preparation for the project, children were asked where they go to see nature. Many said they would have to go on jungle and safari trips; one answered that their family didn’t have a car.

“People aren’t accessing natural spaces, or if they are they’re not really understanding or appreciating what’s there,” says MacLennan.

A UK survey commissioned this summer by the Eden TV channel, looking at 2,000 eight- to 12-year-olds, found that a fifth had never climbed a tree or visited a farm, more than a quarter did not know what happens to a bee after it stings you, and a third play outside only once a week or less.

US author Richard Louv coined the term “nature-deficit disorder” in his 2005 book, Last Child in the Woods, to describe the trend of children spending less time outdoors, resulting in a wide range of behavioural problems.

MacLennan agrees that it is particularly important for children to connect with nature. “There are health and social benefits associated with access to natural spaces. And if you work with people from a young age, they’ll hopefully carry that through to when they’re older,” she says.

Wildlife in the City will attempt to create interest by running hands-on activities such as bug hunting and bird-house building alongside walks and talks. But MacLennan admits that it probably won’t be easy. “It will be a huge challenge. We will be using arts and crafts – that sort of thing – to break down barriers.”

Tim Howell has been running a young people‘s nature and activity project, Change of Scene, in Northampton since the beginning of August. For him, the key to sparking interest is having a combination of activities within the city and trips farther afield, and putting an attractive spin on ideas.

“To get young people to appreciate the natural world, we need to think outside the box,” he says. “If we turn to them and suggest looking at flowers or appreciating some birds, that’s not going to get them going. But when we say let’s go and climb a mountain and take a photo from the top, that’s a bit more interesting. It’s all about finding the right hooks.”

Change of Scene, funded by Natural England’s Access to Nature grant scheme, aims to engage 300 young people over three years from five estates in the east of the city, and hopes not only to improve knowledge and enjoyment of nature but also to raise aspirations and goals through schemes like the Duke of Edinburgh’s award. It has already signed up 127.

“It’s not necessarily about the flora and fauna; it’s about that connection with the world around you,” says Howell. “When I take the young people on residentials, they tell me that one of the most enjoyable experiences is lying down on their back in a field, surrounded by darkness, looking at the stars. Because you don’t get to see that in a town – firstly you don’t get a chance, and secondly you’ve got all the light pollution. You just don’t know what an experience could open up for a young person.”

But for projects working exclusively with green spaces confined within urban areas, how easy is it to create a lasting and meaningful connection to nature? The reinvention of a green space on the Eric Estate in east London, financed by Kerrygold Farmer Cooperative, has certainly made a difference since it was completed in May, according to Kim Yucksei, who has been a resident on the estate for 28 years.

“There was a green space there, but it wasn’t used for anything other than people putting their dogs on there,” she says. “Now we’ve got a wonderful play area with tables, benches, natural wooden climbing frames, little hills and a recipe tree [which residents use to share recipes]. The children are very enthusiastic because there’s nothing else here. We all love it.

“The children helped plant vegetables and we left the labels on the plants so they can see what’s what – they go there and say ‘that’s the one I planted’, help water them, take out the dead leaves. They didn’t just plant it and leave it, they’re now looking after it, and they’ve got a sense of pride.”

Penny Wilson, head of play at Play Association Tower Hamlets, believes the health benefits of engaging children and young people with the natural world shouldn’t be underestimated. “If you watch a child playing outside they’re just doing so many physical tasks – they run for hours, dig, climb. If you told them to do it they wouldn’t, but they want to because they’re playing. You won’t get that level of physical activity with anything else. As far as their mental health goes, a child that doesn’t play is a frustrated, unhappy and unbalanced child.”

Read the rest of the article here:  http://www.guardian.co.uk/society/2010/sep/28/back-to-nature-inner-city-children